The golfer's comeback is set for a men's-only golf course. So much for that enlightenment and atonement 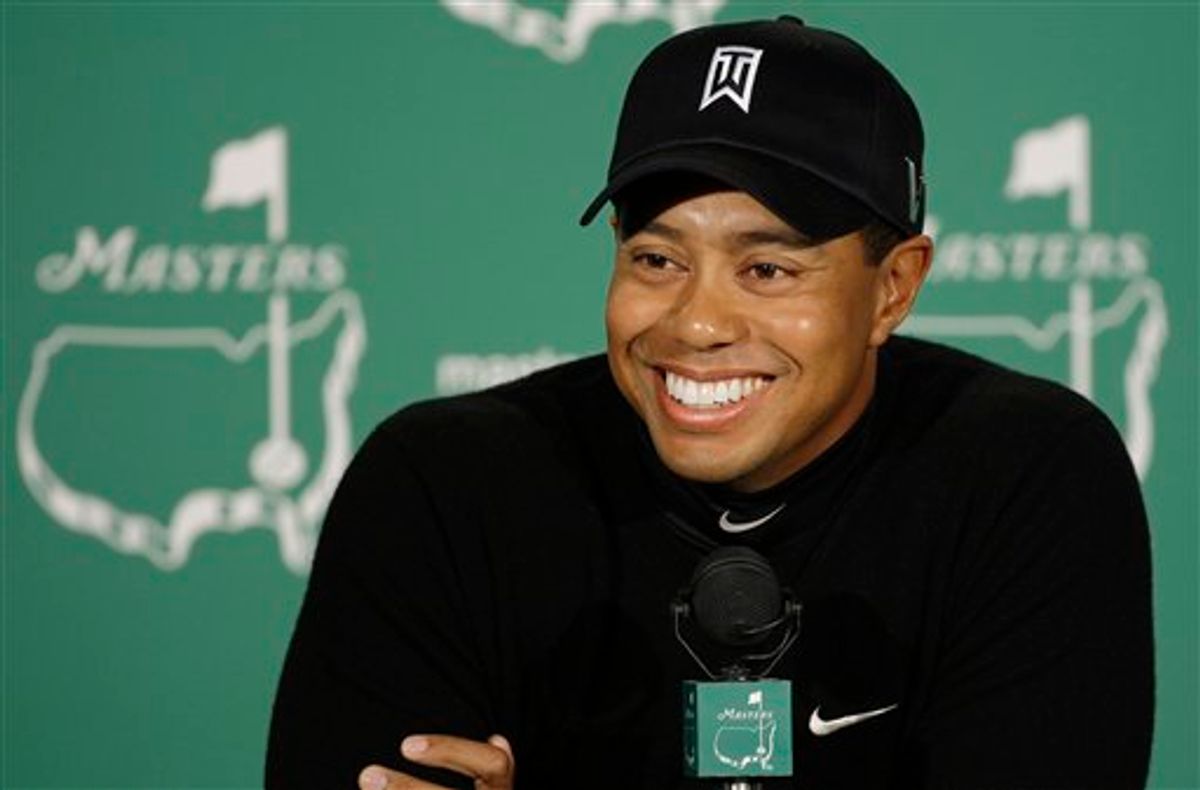 After announcing last week that he would return to golf to play in April's Masters tournament, Tiger Woods continued his Carefully Scripted Atonement Tour on Saturday by granting his first interview since that fateful November car crash -- but there were still minefields galore.

In an evenly worded five-minute talk with ESPN's Tom Rinaldi, the most notorious sexter in the world reiterated the apologies he made in his February press conference and the rhetoric of amends he's no doubt picked up after his ongoing "treatment" for his vices. But while he twice referred to "stripping away" his "denial and rationalization," it seems Woods still has a few blind spots to go. As sports writer Filip Bondy of the New York Daily News recently pointed out, there's a certain cluelessless in a man with a weakness for the ladies staging his comeback at the Masters' Augusta National Golf Club -- a club that Bondy describes as a "home of storied, institutionalized sexism" for its steadfast refusal to admit women as members. Perhaps Tiger's just trying to avoid temptation?

Augusta has never been a bastion of forward thinking -- it only started letting in African-Americans in 1990, a mere seven years before Woods would take his first Masters win there. But despite ongoing and occasionally heated efforts to gender integrate the club, it remains a testosterone monopoly. In 2002, its chairman Hootie Johnson told USA Today, "We're a private club. And private organizations are good. The Boy Scouts. The Girl Scouts. Junior League. Sororities. Fraternities." And if country clubs for millionaires were like social organizations with an altruistic and character-building imperative, he might be on to something. Do its members have to sell cookies to support it, too? He added, "We have no timetable on a woman member. And our club has enjoyed a camaraderie and a closeness that's served us well for so long that it makes it difficult for us to consider change." See, we knew there had to be a really good reason for keeping it single-sex. Complacency!

Speaking to ABC on Monday, USA Today sports columnist Christine Brennan said, "The male-dominated golf world has never really cared about the issue of discrimination against women at Augusta National. That this is the place that Tiger Woods decides to come back with these apparently well-documented issues that he has with women is ironic at best, and, I guess you could say, a slap in the face to women at worst."

In his ESPN interview, Woods explained his transgressions by saying, "I felt entitled, and that is not how I was raised." So if a sense of entitlement leads to errors in judgment, maybe a good place to start changing that attitude would be by speaking out against a club whose policy is all about entitlement. And maybe those amends Woods keeps talking about making might include helping to prove that women have a more meaningful place in the golf world than as groupies. Then again, maybe the man who allegedly told Joslyn James, "I want to treat you rough. Throw you around, spank and slap you," has simply found a more metaphoric way to do just that.