More on those "neutralized" special interests 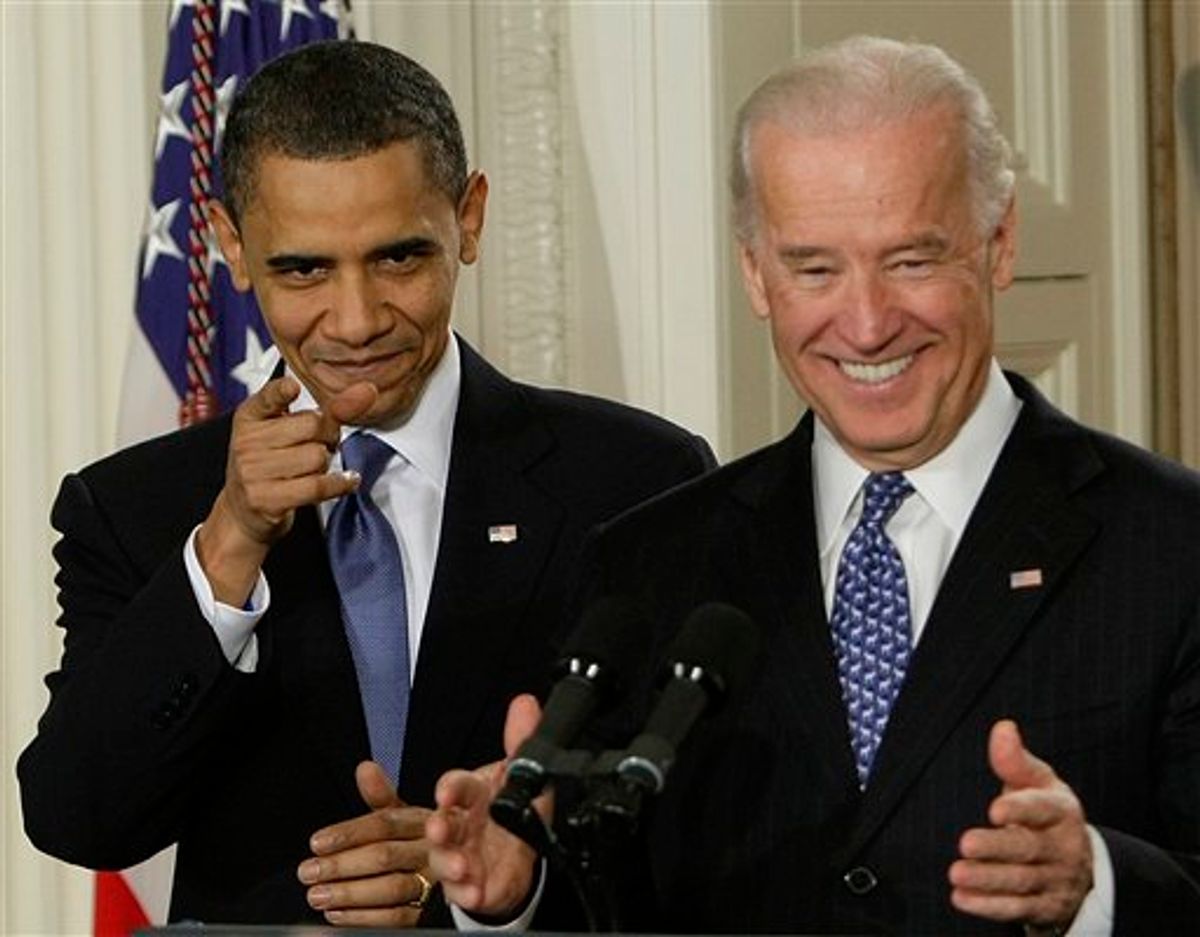 President Barack Obama and Vice President Joe Biden react to cheers as they arrive in the East Room of the White House in Washington,Tuesday, March 23, 2010, for the signing ceremony for the health care bill. (AP Photo/J. Scott Applewhite) (AP)
--

On Saturday, I wrote about the painfully absurd propagandistic attempt by the administration and its most loyal cheerleaders to depict the health care bill as some sort of bold act of "standing up to special interests" -- or, as Ezra Klein put it, the White House, with this bill, has "neutralized" industry interests and banished them to their "twilight" of influence and power in Washington.  There are several follow-ups to that:

First, Kaiser Health News has a new article today -- headlined:  "Doctors, Hospitals, Insurers, Pharma Come Out Ahead With Health Bill" -- which begins as follows:  "Most health industry sectors are winners -- some bigger than others -- under sweeping health care legislation that will expand coverage to 32 million uninsured Americans over the next decade, analysts say."  It details the massive benefits each industry receives (compared to their mild costs), the success they had in killing any real competition and reform in the bill (i.e., the public option, Medicare expansion, drug-reimportation, bulk price negotiations, and an end to the insurers' anti-trust exemption), and explains:  "One indication that the insurance industry is likely to do fine under the bill:  Insurers' shares have soared by an average of 71% in the past year, as measured by the Standard & Poor's 500 Managed Care Index."  That's hardly surprising:  a former Wellpoint executive was the principal author of the original Senate bill from which the final bill was derived.

Second, Harvard Law Professor Larry Lessig, one of the country's most knowledgeable and dedicated advocates of reforming the core corruption that drives the Congress (as well as a vocal Obama supporter), elaborated on the points I made with an excellent piece at The Huffington Post.  Lessig's whole piece should be read, but its central point is that no matter how much one likes this bill or however much good it achieves -- and, as I've always said, the good in it is clear (expanding coverage and restricting some industry abuses) -- it was enacted by invoking and strengthening precisely the same corrupt, sleazy practices that have long driven Washington.

Third, Joe Scarborough this morning used my Saturday column as the basis for several segments on the health care bill, including this quite revealing 7-minute exchange with The Nation's Chris Hayes about how the bill serves the interests of the various lobbies:

The last point that Joe and Chris made there was the key one:  if one wants to argue that this is a good bill, that's reasonable, but to claim that it is an example of Democrats' "standing up to special interests and the health insurance lobby" is so blatantly false that everyone -- especially supposedly independent commentators -- should be deeply embarrassed to espouse it.

The reason this matters so much -- aside from the intrinsic need to debunk political propaganda -- is because corporate control of the Government is one of the most serious problems, if not the single most serious problem, the nation faces.  Every future bill -- from "financial reform" to energy bills to national security and surveillance legislation -- is dominated by that central fact.  To pretend that these interests were vanquished or "neutralized" here -- all in order to glorify the President as the Greatest Leader Since Abraham Lincoln with the type of sycophantic, Leader-worship hagiography unseen since 2002 -- is not just deeply misleading but, worse, helps conceal what remains the greatest threat to the democratic process:  a threat that is not only stronger than ever, but has been made stronger as a result of the last several months.

UPDATE:  For those having difficulty comprehending the point:  nothing I wrote here has anything whatsoever to do with whether the health care bill should have been passed.  I am not, and never was, among those who argued for its defeat.  Right in this very post, I describe the good this bill contains.  This is about the flamboyant claims from the administration and its supporters that they stood up to and vanquished industry interests by enacting this bill, and that special interests, in the Age of Obama, are now in their "twilight."  Neither love for this bill nor a desire to feel euphoric is a justification for making false claims about what the bill achieves and what it represents, and there are -- as I detailed -- serious dangers from dissemnating that myth.