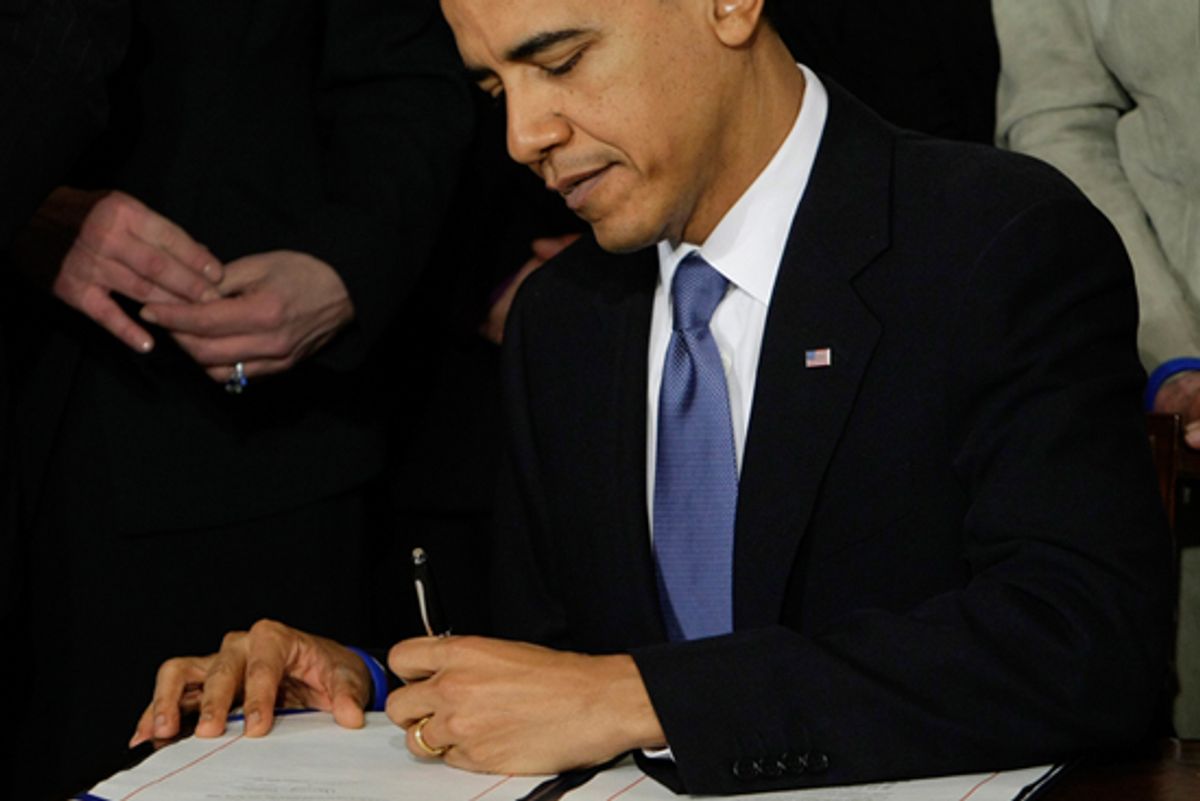 For about an hour Tuesday morning, the East Room of the White House took on something of a party atmosphere. Scores of Democratic lawmakers -- many of them packing cameras, or simply using camera phones to document the event -- turned out to watch President Obama sign the healthcare reform bill that passed Congress on Sunday, and they were in a celebratory mood. As they waited for Obama and Vice President Biden, a few female House Democrats even lined up to pose for a photo in front of the podium.

The mood didn't change once Obama and Biden entered the room, either. The vice president spoke first, and had some particularly effusive praise for his boss.

"Mr. President, your fierce advocacy, the clarity of purpose that you showed, your perseverance, these are, in fact -- it is not hyperbole to say these are the reasons why we're assembled in this room together today. [Y]ou know, Mr. President, you've done what generations of not just ordinary, but great men and women have attempted to do."

All this eventually got to the point where Biden actually stopped himself and said, "I've gotten to know you well enough. You want me to stop because I'm embarrassing you." He didn't stop, at least not immediately, but the atmosphere stayed jovial -- as he took the podium, Obama started off by saying, "Thank you, Joe," to some laughter.

When he spoke, Obama did acknowledge that the Senate still has work to do in passing the fixes to the bill he signed today, but he still had plenty of accomplishment to trumpet.

"While the Senate still has the last round of improvements to make on this historic legislation -- and these are improvements I'm confident they will make swiftly -- the bill I'm signing will set in motion reforms that generations of Americans have fought for and marched for and hungered to see," the president said. He went on to list some of the effects of the bill that will be felt immediately, a key talking point for Democrats as midterm elections approach.

Indeed, the political aspect of this, especially for Congressional Democrats, was a subtext throughout the president's speech. When he called the bill's passage "a testament to the historic leadership and uncommon courage of the men and women of the United States Congress who've taken their lumps during this difficult debate," one member of the audience yelled out, "Yes, we did!" This got the whole room laughing, including the president, who had to pause a couple times to collect himself.

And then there was another shout from the audience: "But we're still standing!"

After the speech, Obama got down to the main event, and signed the bill, switching pens after every letter so as to provide souvenirs for various people who'd played a role in getting the bill passed. Lawmakers tried to snap photos.

"No standing! No standing!" the press photographers in the back yelled, as if members of Congress really cared what they said. "Cameras down!"

Later, the crowd stayed, people milling around and congratulating each other for some time, which made for some interesting moments. Obama gave Rep. Dennis Kucinich, D-Ohio, whom he'd persuaded to support the bill, a big, happy hug. Sen. Blanche Lincoln, D-Ark., who's been a tough nut for reform supporters to crack, walked up to White House Chief of Staff Rahm Emanuel and shook his hand. Emanuel, standing on the dais at the front of the room, looked down at Lincoln and sort of grinned -- not entirely in a friendly way.