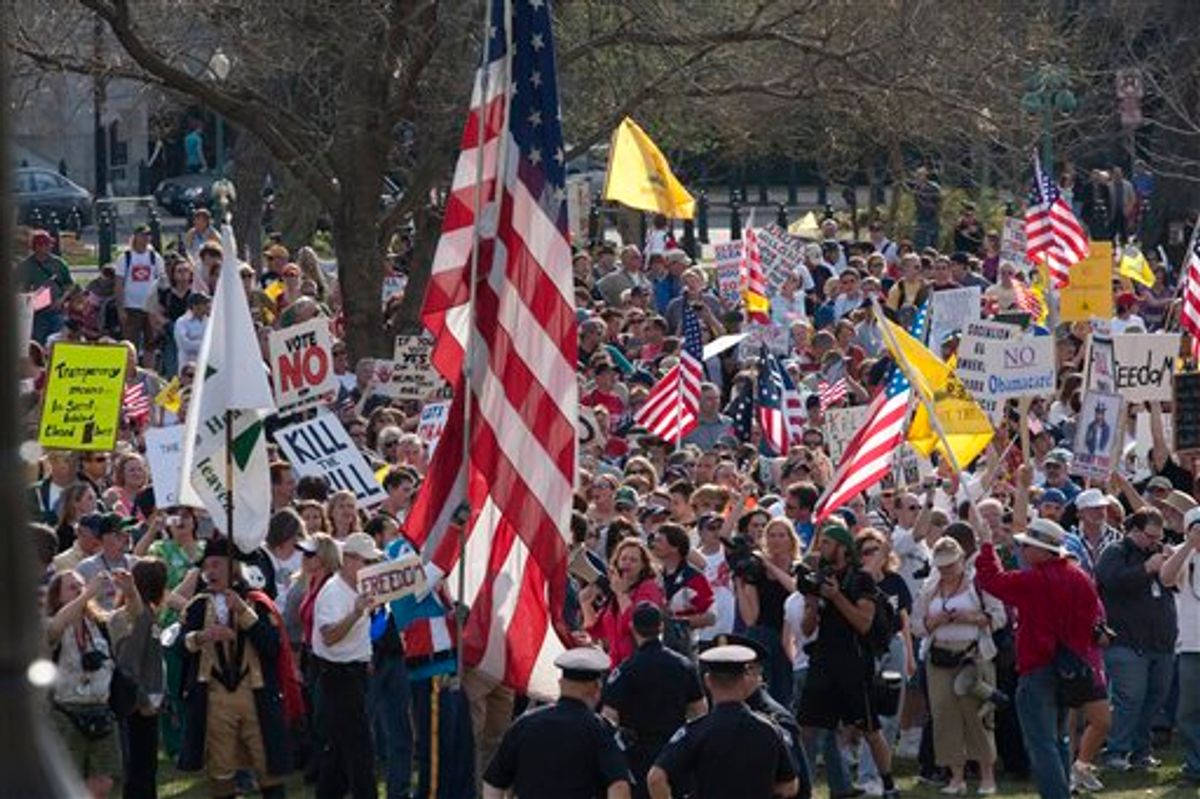 Tea party activists weren't particularly fond of Rep. Tom Perriello, D-Va., even before he voted for the healthcare reform bill last weekend. So maybe it's not a surprise that they posted what they thought was Perriello's home address on a blog, inviting people to "drop by and say hi and express their thanks" in person.

What is a bit of a surprise, though, is that the activists had the address for the wrong Perriello, and sent sending angry constituents to the freshman congressman's brother's house. And that other activists at first refused to take the address down, since they didn't believe it was the wrong one. And then, someone cut a gas line to a propane tank on Perriello's brother's back porch, which got the FBI interested.

Everything apparently ended reasonably well; the address was removed, and local authorities have stepped up police patrols nearby. A leader of the Danville Tea Party, Nigel Coleman, who had posted the incorrect address on his Facebook page, later apologized for the mixup, saying "that was not something we were going for." The Lynchburg Tea Party put up a statement on its Web site denying any responsibility for the incident.

Some of the same groups involved in directing angry constituents to Perriello's brother's house have also been involved in the campaign against him. On Saturday, as the House was debating the healthcare reform legislation that Perriello would wind up supporting, Coleman's Danville Tea Party group sponsored a debate for the seven Republicans running for the GOP nomination to oppose Perriello. (All seven candidates promised to repeal the bill and said they backed Virginia Attorney General Ken Cuccinelli's effort to battle it in the courts.)

The whole thing is just another reminder of the very fine line Republicans are trying to walk this year. They need the energy the tea partiers bring -- that's why local GOP groups teamed up with tea party organizers in Perriello's district. They're trying hard to appeal to the people showing up at the tea party rallies -- which may be why one of Perriello's would-be opponents, Mike McPadden, spent the debate calling for mandatory drug tests for members of Congress. Or why some of Perriello's GOP colleagues spent Saturday waving "Don't Tread on Me" flags from a Capitol balcony, as tea party protesters gathered outside.

But at the same time, antics like posting home addresses on the Web without checking them first -- or worse, hurling racist slurs at members of Congress -- show how that energy could easily become a problem for the GOP. (Especially when vandalism ensues at the addresses listed.) A recent poll found only 28 percent of the public has a favorable opinion of the tea partiers; 49 percent don't know enough about them to form an opinion yet. If organizers aren't careful, the opinion that eventually forms may not be so favorable.