Cantor: Blame the victims for violence against lawmakers 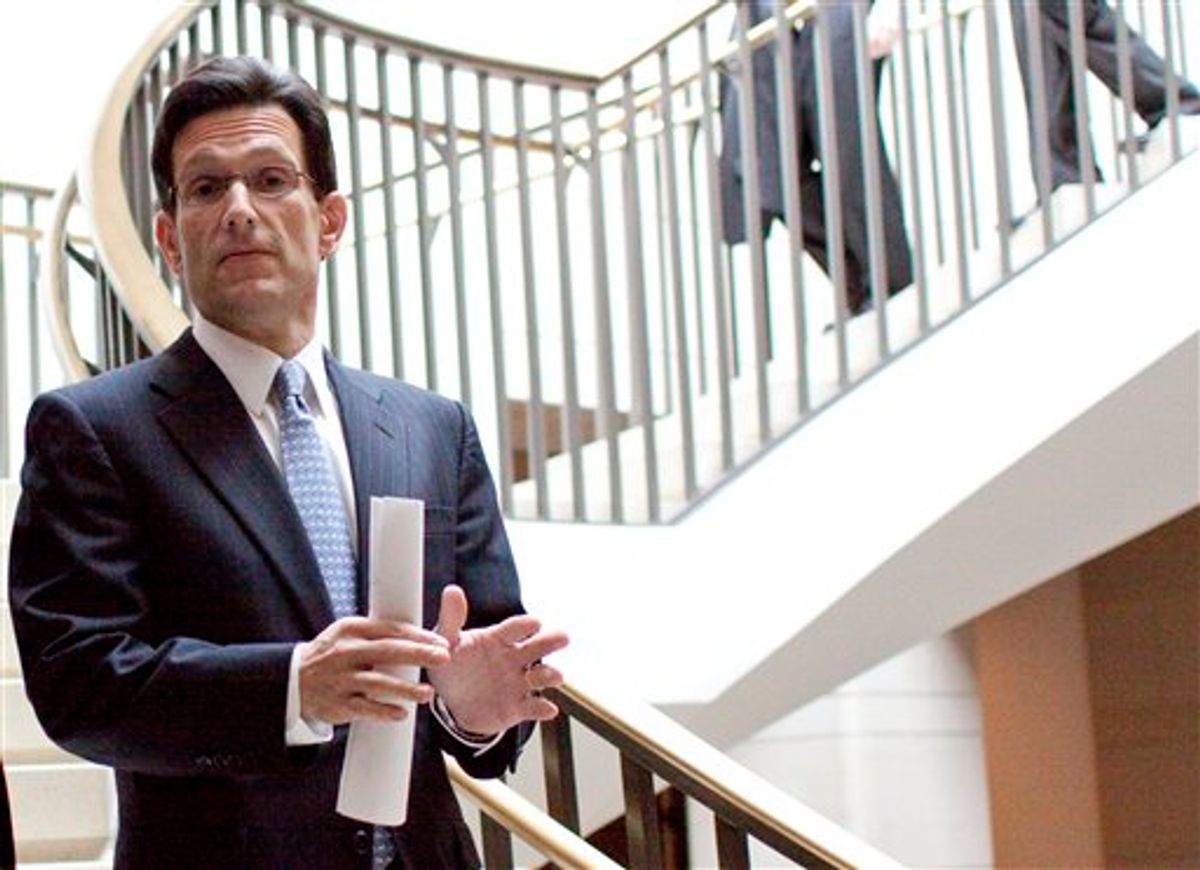 First, condemn violence against members of Congress. Next, announce that you've been threatened frequently yourself -- including having a bullet shot through your campaign office this week -- because you're Jewish. Third, blame Democrats for the whole mess, saying their decision to talk about threats would lead to more violence. After speaking for no more than four minutes, wrap up and leave the podium, taking no questions and marching silently through the Capitol halls as a mob of reporters chases after you trying to follow up.

Democrats have, over the last couple of days, made sure the media was aware of incidents of violence directed at lawmakers: someone cut a gas line at the home of Virginia Rep. Tom Perriello's brother, thinking it was Perriello's house; windows were smashed at offices of Reps. Gabrielle Giffords, D-Ariz., and Louise Slaughter, D-N.Y.; someone faxed a drawing of a noose to House Majority Whip Jim Clyburn, D-S.C.; and Rep. Bart Stupak, D-Mich., put out a whole series of angry voicemails he's received.

So Cantor's statement Thursday was apparently aimed at cooling the rhetoric down -- mostly by Democrats, in case voters start to think the GOP bears some responsibility for the threats. And then, secondarily, by the people making the threats.

One such incident, Cantor said, came just this week. "Just recently I have been directly threatened: A bullet was shot through the window of my campaign office in Richmond this week, and I've received threatening emails," he said. "But I will not release them, because I believe such actions will only encourage more to be sent." An aide says authorities are investigating the shooting incident. Richmond police didn't immediately return a call for comment. (Update: Cantor told the Richmond Times-Dispatch no one was injured in the incident, and it's not clear whether the bullet was aimed at the campaign office or just fired randomly.)

But disclosing it let Cantor segue smoothly into putting the blame for the violence where it belonged: on Democrats, who insist on talking about the threats they're receiving. "Legitimate threats should be treated as security issues, and they should be dealt with by the appropriate law enforcement officials," Cantor said. "It is reckless to use these incidents as media vehicles for political gain. That is why I have deep concerns that -- some [Democratic Congressional Campaign Committee] chairman Chris Van Hollen and [Democratic National Committee] chairman Tim Kaine, in particular -- are dangerously fanning the flames, by suggesting that these incidents be used as a political weapon."

Exactly what Cantor meant wasn't entirely clear. Kaine did put out a statement calling on Republicans to disassociate themselves from acts of violence and racism over the last week. And Van Hollen, D-Md., accused Republicans of "pouring gasoline" on a dangerous situation. But neither of them suggested explicitly that Democrats use the threats as a political weapon. When I asked a Cantor spokesman for any specific examples of what Kaine and Van Hollen had said, he responded by sending me the text of Cantor's statement. (Democrats weren't too pleased with the charges. "Let's be clear: calling on Republican leaders who have contributed in part to this anger by wildly mischaracterizing the substance and motives of health reform to condemn these acts is entirely appropriate," DNC spokesman Brad Woodhouse said.)

And it was quite clear that Cantor meant to put Democrats on the defensive. He said that while press releases couldn't stop violence against members, they could make the situation worse. "I'm not naïve enough to think that letters, statements or press releases will prevent anyone disturbed enough to commit violence from acting," he said. "But I do know that such letters, statements and press releases can very easily fan the flames. By ratcheting up the rhetoric, some will only inflame these situations to dangerous levels. Enough is enough -- it has to stop."

So remember, you Democrats receiving the threats: stop talking about them.

Update: Doug Thornell, a spokesman for Van Hollen, just sent over this statement responding to Cantor:

"Yesterday, Congressman Van Hollen called upon Republican leaders to condemn the harsh rhetoric that is fanning the flames of extremism around the country. Today, Mr. Cantor had the opportunity to join Mr. Van Hollen in calling for restraint. Instead, he chose to use his press conference to level false accusations. This is straight out of the Republicans' political playbook of deflecting responsibility and distracting attention away from a serious issue."

Update 2: The Richmond Police Department has issued this statement about the incident:

The Richmond Police Department is investigating an act of vandalism at the Reagan Building, 25 E. Main St., Richmond, Virginia. A first floor window was struck by a bullet at approximately 1 a.m. on Tuesday, March 23. The building, which has several tenants including an office used by Congressman Eric Cantor, was unoccupied at the time.

A Richmond Police detective was assigned to the case. A preliminary investigation shows that a bullet was fired into the air and struck the window in a downward direction, landing on the floor about a foot from the window. The round struck with enough force to break the windowpane but did not penetrate the window blinds. There was no other damage to the room, which is used occasionally for meetings by the congressman.

The Richmond Police Department is sharing information about the incident with appropriate law enforcement agencies.

At this time there are no suspects.

Update 3: That police statement certainly does make it seem like the bullet was fired randomly, not intentionally, and it definitely doesn't seem like anyone intended to hit Cantor. If the bullet hit the window "in a downward direction" with only enough force to land a foot inside the window, chances are it fell there after someone fired in the air.