Take a slippery-slide, delightfully nasty ride back to the era of Motley Crue, Reagan and pastels 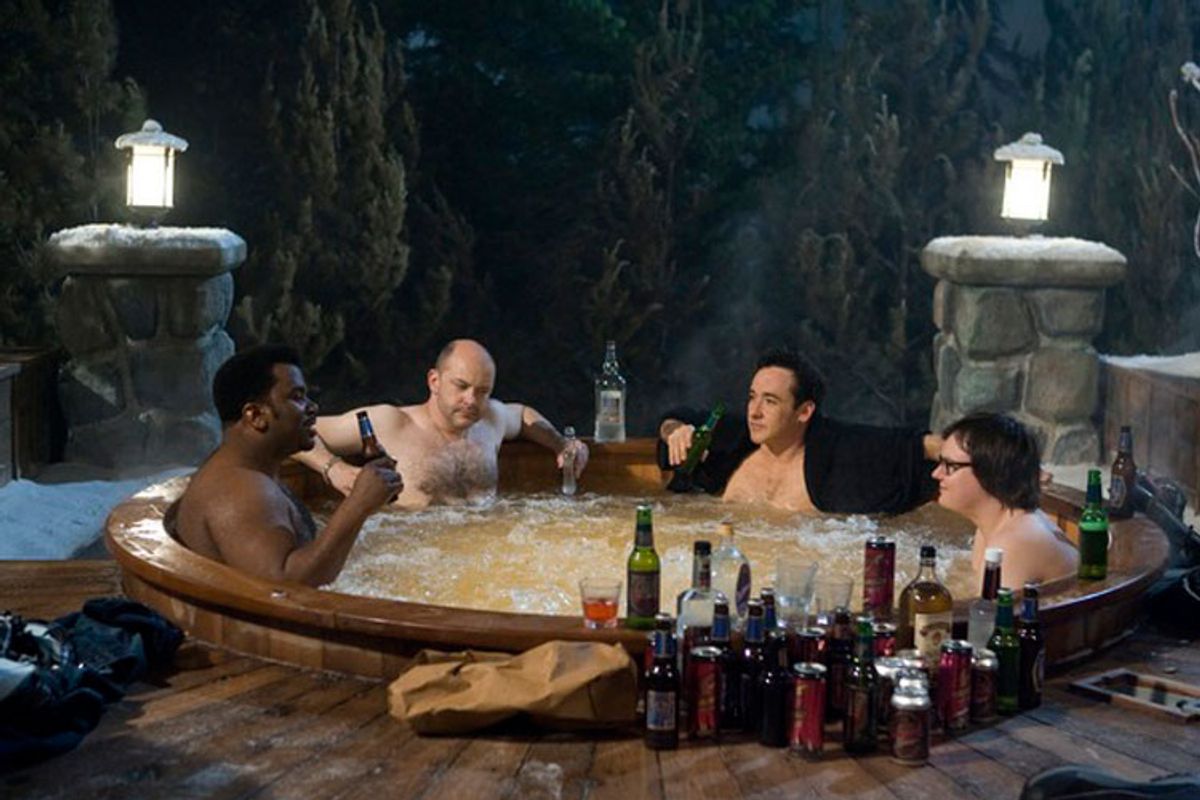 If you hop a ride in the dudely new comedy "Hot Tub Time Machine," here's what you get: A reckless celebration of casual drug abuse and meaningless sex that makes vulgar sport of women with big hair, gay men in general, disabled people, dismembering injuries, members of Poison and Mötley Crüe, deceased pop celebrities, ski-patrol douche bags, Internet geeks and, most of all, the bruised egos of middle-aged guys. Beyond that, "Hot Tub Time Machine" takes the universal human longing to reimagine and relive the past -- which has fueled artists and poets from the Lascaux cave-painters through Proust and Fitzgerald -- and reduces it to cheap, foul and thoroughly amoral humor.

Don't get me wrong: These are the things that make "Hot Tub Time Machine" awesome. Let me see if I can get myself into the newspaper ads here: Turn on the jets for a funky-fresh ride into the spandex '80s! Strip down and jump in! The water's fine -- and so are the honeys! Best hot-tub-time-machine flick of all time! Zanier than "Jacuzzi to the Jurassic"! More naked high jinks than "Spa Wars 2: Toga! Toga! Toga!" Out-sizzles "Cocaine, Chlorine and Cleopatra"! (Let's not discuss the banned Eurosleaze Spanish Inquisition classic, "Boil the Witch.")

OK, I'm calmer now. No, nobody's ever come up with this particular high-concept premise before, which in terms of wink-at-the-audience intentional dumbness may out-snake "Snakes on a Plane." Listen, I really did enjoy "Hot Tub Time Machine," mostly for the game performances of its central trio of guys and a script (by John Heald, Sean Anders and John Morris) that's surprisingly sharp and funny, given the shamelessly calculated nature of the entire project. But I hasten to add that, like Adam (John Cusack), Nick (Craig Robinson) and Lou (Rob Corddry) -- 40ish losers who are transported by the eponymous device back to a legendary ski-resort par-tay weekend in 1986 -- you may regret it all in the morning.

At its best the film is blissfully, anarchically funny, and director Steve Pink keeps the pace crackling. As the jokes grow ever cruder -- a vomit-encrusted squirrel! An adult man making an obscene phone call to a 9-year-old! A same-sex blow job at gunpoint, ending in one of the most pornographic sight gags in cinematic history! -- and the snickering asides to the audience grow broader, the central threesome somehow retain the sense that they're decent and potentially redeemable guys beneath the thick layers of idiocy. But I detect a concept that wasn't just prepackaged but also haggled over (probably by competing producers and writers), with unusual results: a comedy that in large part is smarter and sweeter than it needs to be, but ends more stupidly than it should.

For all that he's a sincere and ethical left-winger in real life, John Cusack has always been at his best playing ruthless and/or clueless characters out of step with the world around them. At the beginning of "Hot Tub Time Machine," Adam comes home from his soulless sales job to find that his girlfriend has moved out, leaving a variety of go-fuck-yourself messages behind, and that Lou, his depressed, divorced, arrested-adolescent one-time best friend, has been hospitalized after either a suicide attempt or a ludicrous accident. When Nick, the bluff African-American third amigo in their former troika, shows up at the hospital too, it's obvious that Adam -- the nominally successful one -- has behaved like an utter douche to both of them for years. (Side note: Kudos to Pink and the producers for making Robinson's role much more than the customary "token black friend." There's a thin smattering of race-specific gags, but Nick's character could be any color.)

Robinson and Cusack are both very funny, but special honors go to Rob Corddry as the most simultaneously repellent and endearing member of the threesome (and given Lou's uncertain sexual predilections, I use that word advisedly). Lou makes Ben Stiller's character in "Greenberg" look well-adjusted; he's the paradigmatic beloved-but-horrible old friend, who may have lost his hair (along with his wife and job) but absolutely refuses to let go of the quasi-glorious male-bonding rituals of long ago, and the crappy hair-metal songs to match. Lou's tasks on their return visit to 1986 include sleeping with the sluttiest girl at Winterfest, absorbing repeated ass-kickings from the uptight ski-patrol douche bags, and stage-managing a curious number of intimate moments with his buddies. (If your doctoral dissertation is titled "Homoerotic Fixation Within the Purportedly Homophobic Buddy Comedy Genre," Lou can be on the cover.)

Anyway, what could possibly be better therapy for a triple dose of middle-aged angst than a weekend getaway to the now-decrepit ski resort where these guys enjoyed a legendary debauch, 20-odd years earlier -- followed, of course, by a trip back in time? I feel more than a little ridiculous explaining to you the plot mechanics of a movie called "Hot Tub Time Machine." It's got a hot-tub time machine in it, dammit! (It's apparently maintained and operated by Chevy Chase.) Along with a radioactive Russian version of Red Bull, conversations about the various rules for living found in the Friend Handbook and the Asshole Handbook, and Adam's psilocybin-fueled encounter with a free-spirited and thoroughly adorable female reporter for Spin magazine (one I definitely don't remember meeting when I worked there).

Theoretical explanations should be left to Adam's nephew Jacob (Clark Duke), a basement-dwelling Second Life aficionado who comes along for the ride even though he doesn't exist yet in 1986. "I write 'Stargate' fan fiction," he observes, "so I do have some idea what I'm talking about." Jacob is convinced that the three buddies must relive the events of Winterfest '86 just as they happened the first time -- groupie sex, massive cocaine ingestion and plastic-fork eyeball-stabbing included -- or risk endangering not just his life but the entire space-time continuum.

Lou rolls his eyes: "OK, Professor Hawking. Explain it to us in your robot voice." He's got a point: Screw the space-time continuum. Taken as a whole, its coolness is overrated. When I rolled back to '86 in my own private-model HTTM, I utterly failed to prevent my indie-rock-star roommate from throwing the dishes out the window rather than washing them. I did, however, erase almost every trace of Barack Obama's Mombasa birth certificate and the terrorist training he and I undertook in Libya. Like the guys in the movie, I forgot to invest in Microsoft or prevent the birth of Miley Cyrus. I guess the message of hot-tub-time-travel movies -- and, hey, of life! -- is that you'll always manage to screw something up.