I've had my own run-ins with Rome. And I doubt the latest revelations will take down Benedict XVI 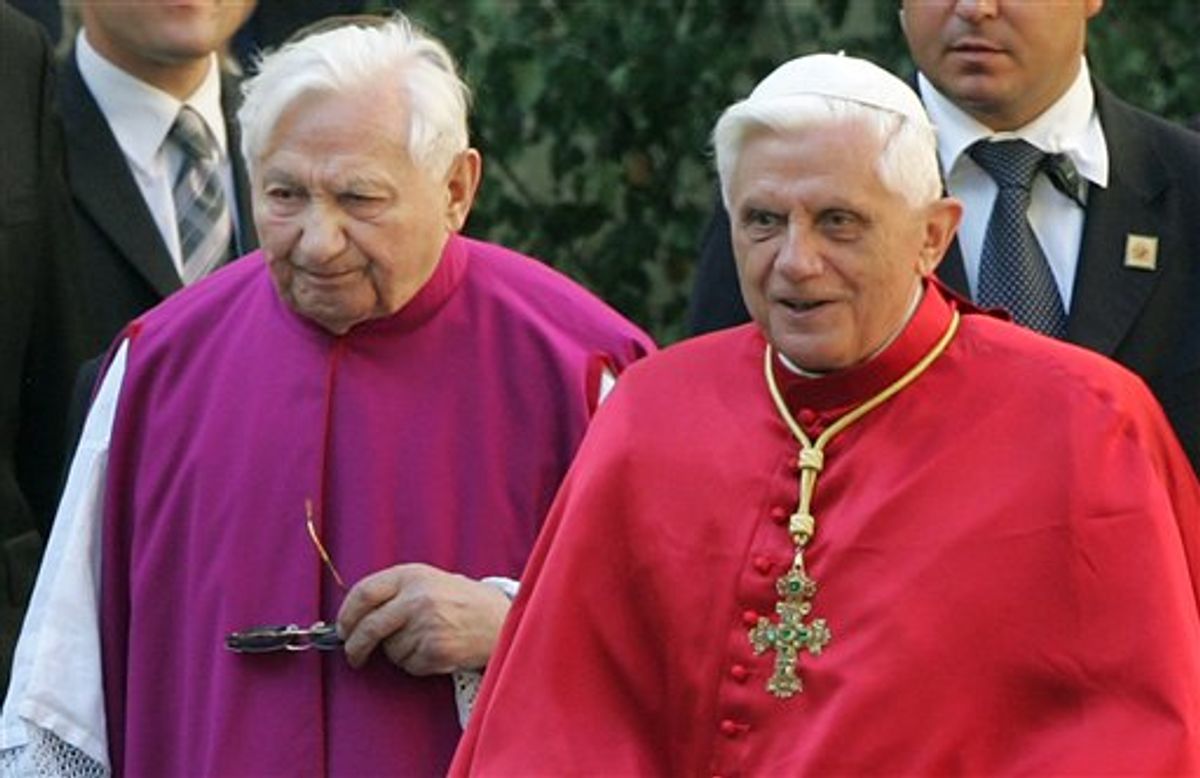 FILE - In this Sept. 13, 2006 file picture Pope Benedict XVI, right, walks with his brother priest Georg Ratzinger in Regensburg, southern Germany. The pope's brother says in a newspaper interview that he slapped pupils across the face after he took over a renowned German boys' choir in the 1960s. He also says he was aware of allegations of physical abuse at an elementary school linked to the choir, but did nothing about it. In an interview with the Passauer Neue Presse published Tuesday March 9, 2010 , he said "repeatedly administered a slap in the face" to pupils at the Regensburger Domspatzen boys choir. He says it was common then and he stopped after Germany banned corporal punishment in 1980. (AP Photo/Diether Endlicher,File) (AP)
--

A quarter-century ago -- at a time when about 10 priests in Rhode Island had already been accused of sexually abusing children -- the Roman Catholic Diocese of Providence tried to stop my then-14-year-old daughter from making her confirmation because of her mother's work with Planned Parenthood.  When that conversation took place in our pastor's office (and was taped by me), I was also told not to come to the rail, since I'd been excommunicated for that work.

"Let me understand this, Father. Because of my work with women at Planned Parenthood, you don't want me to come to the rail and take communion from the hands of a man who sexually abuses children? Is that what you're telling me, Father?"

The old man mumbled something about not condemning all priests for the actions of "one or two." My daughter was eventually confirmed, but 25 years later we all look beyond the Catholic Church for whatever religious support we seek.

The "one or two" pedophile priests -- and those who had multiple sexual contacts (consensual and forced) with adult women and men -- are now known as legions. From around the globe, reports still flood in from former, and current, victims. Most shockingly, the Vatican, under Pope Benedict XVI, continues to stonewall and does as little as possible to stop the offenders.

This week, we learned that a now-deceased priest, Lawrence C. Murphy, sexually molested over 200 deaf boys in his flock at St. John's School for the Deaf in Wisconsin -- and that the Vatican did nothing when confronted with evidence of his actions.  At the same time, Benedict in Rome was accepting the resignation of Irish Bishop John Magee, accused of mishandling charges of sexual abuse there.

The scandals go on and on, bankrupting diocese after diocese and sending even devout Catholics to search for a church with more integrity. In the process, more and more evidence points to former Cardinal Joseph Ratzinger, now the pope, as a central figure in the church's apparently deliberate effort not to expose the offending priests and others to public scrutiny, investigation and -- ultimately -- punishment for their crimes. One of the Vatican's best coverups seems, after centuries in place, to be unraveling.

When I was thrown out, there had not been a public pronouncement of excommunication for centuries. But my diocese was in disarray with documented scandals surfacing daily and rumors that reached to the highest offices of the chancery, where Bishop Louis Gelineau (since retired) mainly hid from public comment.

The local monsignor (and a former Rome protégé of Ratzinger) was Salvatore Matano, who was eventually rewarded with a bishopric in Vermont for serving up my daughter and me as a distraction from the diocese's exploding scandals.

In the politics of the Vatican, stool pigeons and wannabes report alleged infractions to their superiors and are rewarded. Those who try to argue for the true meaning of dogma and the exercise of free will are punished. Hypocrisy wins out over truth every time and the faithful are given "my way or the highway" choices by Rome.

(Bishop Matano went on to bring his diocese in Vermont close to bankruptcy with the settling of pedophile cases, and has since become a more tacit figure.)

Joseph Ratzinger, instead, went on to the papacy, but he was a papal choice that many priests, bishops and even cardinals in the know looked upon with skepticism, at best. He lacked the charisma of his predecessor John Paul II and certainly had no use for the ecumenism of John XXIII, for whom most of the faithful (and clergy) still yearn.

His personal history as a boy, and later as a priest and bishop, in his native Germany has always had a shadow that looked too much like a swastika to reassure his critics. His record as the head of the Vatican's CIA-equivalent (the Congregation for the Propagation of the Faith) is rife with vindictive judgments against any individuals -- clerical or lay-- who did not interpret dogma as Ratzinger saw it. During his tenure, there were plenty of punishments for Catholic intellectuals -- and plenty of  ignoring Catholic clergy who were guilty of heinous crimes.

About 20 years ago, Ratzinger, in fact, gave the direct order to all Catholic bishops to report the burgeoning sexual scandals only to his office in Rome. This was the beginning of Vatican-gate under which complying bishops often did not report such crimes to their local civil authorities.

Whether the ultimate exposure of Ratzinger can bring his papacy to an end is doubtful. The church has a long history of protecting its pontiffs, even when they've ordered killings, allowed the faithful to be slaughtered, fathered illegitimate children, stolen and worse.

Short of the unlikely revival of the feudal tradition (rumored to have been used last on Pope John Paul I) in which pontiffs making waves might be poisoned (or tossed in the Tiber, or fatally injured by an arranged fall off their horse), Ratzinger will be pope until his natural death. The brutal politics of Rome make anything inside Washington's Beltway -- or in the darkest political reaches of Iran, Russia or Beijing -- look benign by comparison.

Mary Ann Sorrentino was executive director of Planned Parenthood of Rhode Island from 1977-1987. In 1985 she was formally declared "excommunicated" because of that work. She is a columnist and author of "Abortion: The A-Word" (Gadd Books). This post also appears on her Open Salon blog.