Inside the Senate's healthcare meltdown

Republicans force an overnight "vote-a-rama" on amendments to the healthcare bill, slowing Congress down 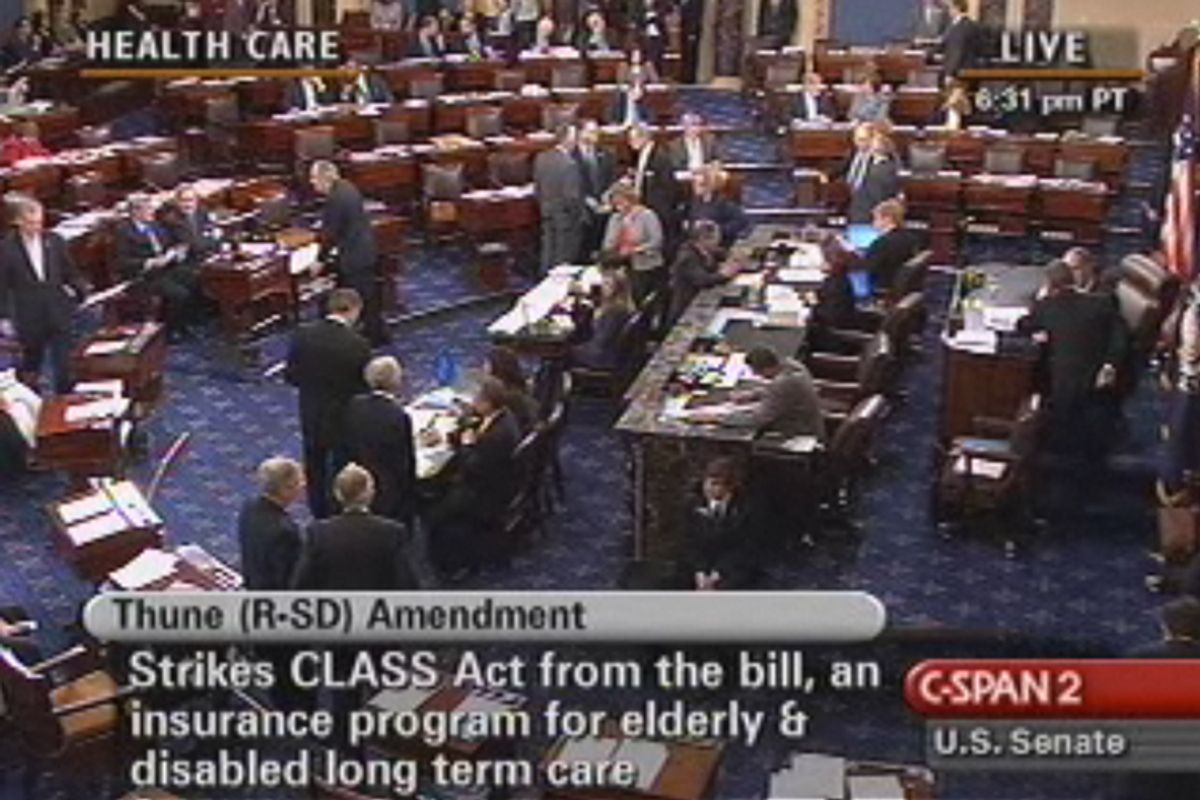 The healthcare bill President Obama signed on Tuesday moved into the Senate Wednesday.
--

Ah, the United States Senate. The world's greatest deliberative body. The most exclusive club. The home of giants in the annals of politics: Lyndon Johnson. Bob LaFollette. Daniel Webster.

And, at least this week, about as civil as a roomful of cranky 4-year-olds who missed both their lunches and their naps.

Faced with the prospect of watching Congress complete work on a budget reconciliation measure designed to amend the healthcare bill President Obama signed into law Tuesday, Senate Republicans melted down. For the last two days, the GOP has blocked committees from working past 2 p.m., petulantly using one of the chamber's dopiest rules to force lawmakers to knock off in mid-afternoon because they didn't have unanimous consent to keep working. Republicans followed that up by dropping a long series of amendments to the healthcare bill into the hopper -- which, thanks to the rules of the budget reconciliation process, can't be limited. Democrats were already planning to vote all but unanimously against them. Republicans were united in support, but it didn't matter; no one expected any to pass. Even so, at 5:32 p.m., the Senate embarked on a "vote-a-rama," which is, believe it or not, the quasi-official name for the endless series of back-to-back roll call votes required to dispose of all the proposals. One minute of debate was scheduled for each side before each 10-minute vote. That was barely enough time to explain what the amendments would do, and under strict orders from Democratic leaders, the presiding officers gaveled the debate closed as soon as each minute expired. [Editor's Note: Early this morning, discovered a minor violation that sent the bill back to the House.]

All that left Democrats in a bit of a huff themselves. "We do not have to agree to the one minute [of debate]," Senate Majority Leader Harry Reid, D-Nev., told Republicans, a bit ostentatiously. "But we want everyone to understand we have tried to be as fair as we can throughout this whole process. There are some who would say why would we waste 46 minutes" debating the amendments. Reid then admonished his colleagues to stay nearby -- for the entire eight hours of voting they planned to hold. (More could follow, because additional amendments could be offered without any advance notice.) "Everyone stay here," Reid insisted. "It works a lot better if you stay very close to your seats."

So as the vote-a-rama got rolling, the Senate side of the Capitol started to resemble a college dorm, albeit one where the undergrads have an unhealthy devotion to parliamentary procedure. Minority Leader Mitch McConnell set up tables with white cloths and a series of chafing dishes to feed his troops in his office. (Around the corner, lobbyists for BP Amoco greeted guests, including a few House members, for a previously scheduled reception just off the Senate floor, and caterers dodged members of the Senate coming and going from votes.) The cafeteria stayed open until 9 p.m., to serve the hundreds of staffers, reporters, police and maintenance workers stuck watching the proceedings. Lawmakers either pulled their chairs closer to each other on the floor, or they dashed back and forth from the chamber to their offices, catching a few minutes away from the votes whenever they could. "Can I catch you on the rebound?" the newest inmate in the asylum, Sen. Scott Brown, R-Mass., pleaded with some reporters as he ran for an elevator, before I had a chance to ask him if this was really what he signed up for. "I gotta go call the boss back home."

Republicans insisted, very solemnly, that each one of their amendments was a vital fix to a flawed bill. "The administration and some in Congress would like to think this debate is over," McConnell said. "They want the American people to sit down and quiet down. That's been their approach to healthcare for an entire year. Well, Republicans think Congress serves the people, not the other way around." And many of them did, indeed, make an attempt to address the healthcare bill they were attempting to amend: There was the one by Sen. John Barrasso, R-Wyo., to order the Department of Health and Human Services to certify that the bill would drive insurance premiums down; the one by Sen. Chuck Grassley, R-Iowa, to require senior White House staff to buy insurance through the exchanges the bill would set up; the one by Sen. Kay Bailey Hutchison, R-Texas, to "protect the right of States to opt out of a Federal healthcare takeover" (Hutchison, apparently, hadn't realized she'd already lost her bid to unseat Rick Perry as president of the Sovereign Nation of Texas); the one by Sen. George LeMieux, R-Fla., to require all members of Congress to go on Medicaid; and, oh yes, the one by Sen. Tom Coburn, R-Okla., to bar child molesters and rapists from getting their Viagra covered by health insurance. "The vast majority of the American people don't want their tax dollars paying for those kinds of drugs for that kind of people," Coburn explained.

Sure, some of the amendments are serious (but if any of them were adopted, the House would have to vote on the bill again, derailing the whole thing). That last one gave away the game that was really under way, though, as did an amendment filed by Sen. Robert Bennett ordering the District of Columbia to "immediately suspend the issuance of marriage licenses to any couple of the same sex" until the city holds a referendum on its new marriage equality law. Republicans weren't hoping to change the healthcare bill; they were hoping to put Democrats on the wrong side of some awkward votes come November, or to pander to their own conservative bases back home. "There's a rhyme or reason to what we're doing," Sen. Lindsey Graham, R-S.C., told Salon. "You will hear about some of these amendments later."

But Democrats know that, so most of the votes were actually one step removed from the amendment offered. Rather than voting directly against GOP proposals, Democrats voted on procedural motions to kill them: They could later, sort of plausibly, say they didn't actually vote to help child molesters get it up; they only voted not to deal with the amendment on the matter. Some conservative Democrats strayed from the party on a few votes -- Sen. Ben Nelson, D-Neb., voted with the GOP to strip the special deals states besides his would get out of the bill (even though he's already said he's voting against the reconciliation bill, which means he's voting to keep Nebraska's deal intact).

At least the amendments served some political purpose, not to mention delaying the bill's progress through the Senate. The GOP refusal to let committees meet made no sense at all. "This is so pointless," Sen. Carl Levin, D-Mich., said Wednesday afternoon, after he was forced to postpone a hearing that several high-ranking military officers had flown halfway around the planet to attend. "This isn't even slowing down the passage of the bill that [Republicans] don't like."

No one would come forward to say who was objecting to the committee business, and that tactic seems likely to continue into Thursday, as well. The vote-a-rama, though, may not. In the end, Republicans are likely to reach some form of détente that keeps the final vote on the healthcare bill from slipping too far into the weekend. The fact that no GOP lawmakers had taken advantage of their right to demand the whole bill be read out loud -- a real time-waster -- earlier in the week was the tipoff; the whole point here seemed to be to put up a fight but still get out of town, as scheduled, by the weekend. Standing on principle, after all, is fine, but not when it gets in the way of a two-week break -- sorry, make that "district work period."