Some on the right never believed Obama had a right to govern, and threats over healthcare are the grim result 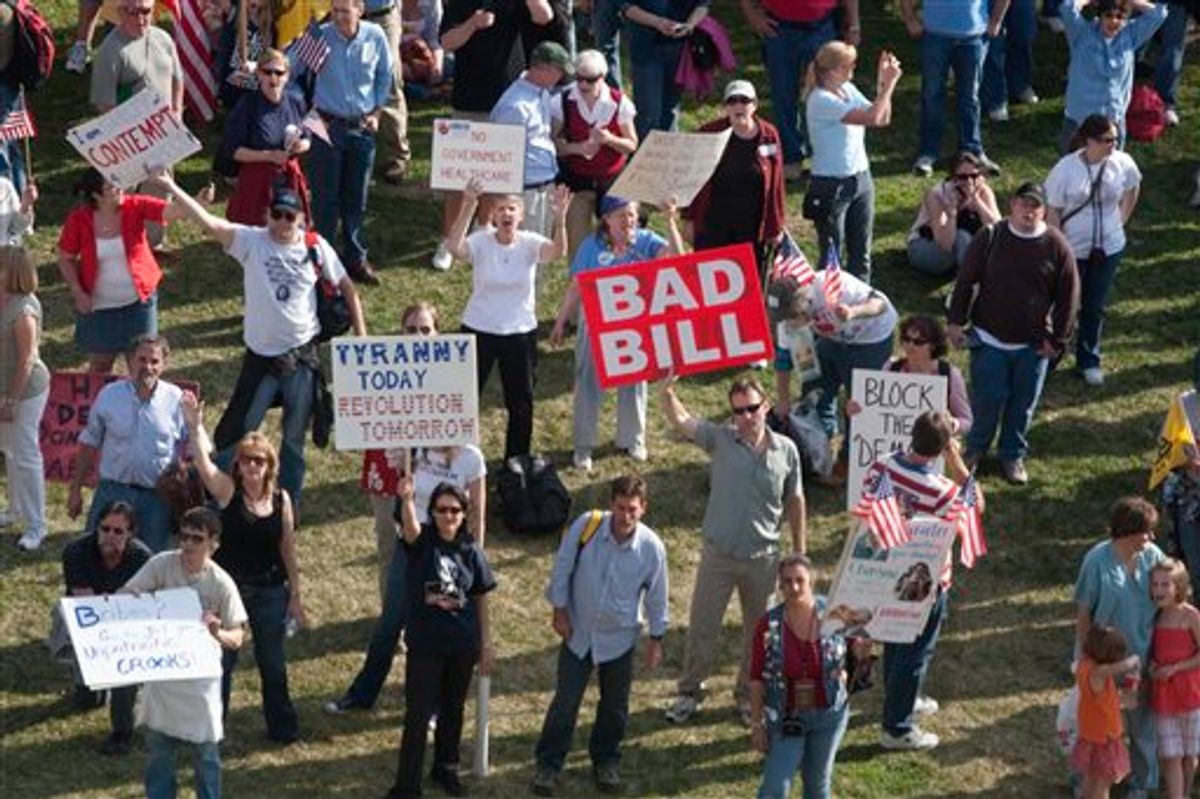 It's now been nearly a year since the Department of Homeland Security released its infamous report on the heightened risk of domestic extremist violence. It's also been almost that long that conservatives have griped that the report was a political smear job by a liberal-run department, unfairly singling out right-wingers and accusing them of being gun-waving, bomb-throwing extremists without any evidence.

Since the report's release last April, it's reemerged periodically as acts of domestic political violence have dominated the news: the killing of Dr. George Tiller, the Holocaust Museum shooting and the suicide attack on the Internal Revenue Service all come to mind, along with a general increase in white supremacist activity. Mainstream conservatives have strenuously denied any ideological overlap with this stuff, some going so far as to say that certain of these incidents belong on liberals' consciences. You can hardly blame them. A John McCain sticker on the car doesn't mean a white hood in the closet.

Still, sometimes the evidence accumulates in front of your nose. As the healthcare debate reached its climax in the past week or so, there’s been an extraordinary outpouring of nastiness from the right, much of it tinged with seething, tribal hatred. People at the tea party protest outside the Capitol flung hateful epithets at Rep. John Lewis, D-Ga., Rep. Andre Carson, D-Ind., and Rep. Barney Frank, D-Mass. And now that the bill has actually passed, there’s been an upswing of acts of intimidation -- in some cases, rather concrete -- against Democratic members of Congress.

Probably the most symbolically freighted incident thus far has happened to Rep. John Clyburn, D-S.C. An African-American and member of the Democratic leadership, Clyburn reported that his office had received a faxed image of a noose, and that his wife had been threatened over the phone. Rep. Gabrielle Giffords, D-Ariz., and Rep. Louise Slaughter, D-N.Y., have both had district office windows smashed, as has the office of the Cincinnati Democratic Party. Slaughter, who as chair of the House Rules Committee has had her name associated with House floor procedures, also received a voicemail that used the word "snipers." Rep. Bart Stupak, D-Mich., released a passel of menacing voicemails that he received from abortion opponents who believe he betrayed their cause. And in Virginia, after a tea party activist urged angry healthcare opponents to pay a visit to the house of Rep. Tom Perriello, and mistakenly released his brother’s address instead, someone severed the gas line at Perriello's brother’s house.

Capitol police and Democratic officials have begun to take some basic security measures, such as securing residences or moving families away from home districts.

It's certainly not the case that, because someone dislikes healthcare reform or wants tax cuts, we can infer support for physical violence or intimidation against Democratic members of Congress. But that's not really the point.

Today on his show, Morning Joe, MSNBC host Joe Scarborough asked why he never heard these stories of scary voicemails from Republicans. "I've got to say, and I'm going to get in trouble for saying this -- it's amazing, I never hear these stories, when it's Republicans receiving these threats." The implication was that Democrats are a bunch of cowards who just can't take the normal amount of heat associated with being an elected official.

But, while it is too soon to say exactly what is going on, it is obviously not normal. More to the point, it doesn't take a genius to see that there’s a connection between the rejection of Barack Obama's legitimacy as president, the vastly disproportionate reaction to his push for healthcare reform, and the increasing role of civil violence and intimidation in our politics.

Some segment of the American right wing has never reconciled itself to the idea that, having won an election decisively, Obama and his congressional allies are now entitled to govern. The endless conspiracy theories that have proliferated about the president have all varied on this theme -- that he’s somehow an impostor, and so even though he was duly elected and sworn in and governing according to the rules, he's somehow cheating, and has to be resisted.

When folks on the right insist that the president is, in the popular phrase of the moment, cramming reform down our throats, they’re riffing on this idea as well. Somehow, the ordinary mechanism of democratic accountability -- waiting for election day, and voting the bums out -- isn’t good enough anymore.

A political minority that isn’t willing to live with being on an election’s losing end is the classic recipe for political violence. Obviously, we’re generalizing here: it's not clear how widespread this attitude really is on the right, and we don’t know exactly how much of this kind of thuggishness there has even been so far, much less how whether there is more to come.

But what does seem apparent is that the proportion of opponents of the president and his agenda who think this isn’t some negligible fringe. It seems to constitute a major part of the popular opposition, and rhetoric about the illegitimacy of the president, his agenda, and the methods by which he’s pursuing it, are now entirely standard fare in the mainstream.

There are wack-jobs to be found in all areas of the political spectrum, and presumably Joe Scarborough did get some weird voicemails while in Congress. But the reason that he’s only hearing about Democrats receiving a wave of scary threats isn’t because they whine about them, and Republicans don’t. It’s because an extremist ideology -- essentially, a refusal to abide by uncongenial election results -- has purchase on a much greater part of the right than anything like it does on the left.