The N.Y. Times bizarrely claims that choosing this long-time defender of Bush radicalism would "excite the left"

A media consensus has emerged that the retirement of Supreme Court Justice John Paul Stevens, the 90-year-old Ford-appointee who became the leader of the Court's so-called "liberal wing," is now imminent.  The New York Times' Peter Baker has an article today on Obama's leading candidates to replace Stevens, in which one finds this strange passage:

The president’s base hopes he will name a full-throated champion to counter Justice Antonin Scalia, the most forceful conservative on the bench. . . . The candidates who would most excite the left include the constitutional scholars Harold Hongju Koh, Cass R. Sunstein and Pamela S. Karlan.

While that's probably true of Koh and Karlan, it's absolutely false with regard to Sunstein, who is currently Obama's Chief of the Office of Information and Regulatory Affairs.  From the beginning of the War on Terror, Cass Sunstein turned himself into one of the most reliable Democratic cheerleaders for Bush/Cheney radicalism and their assault on the Constitution and the rule of law. 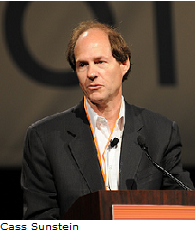 Worse still, in 2005, Sunstein became the hero of the Bush-following Right when, in the wake of revelations that the Bush administration was illegally eavesdropping on Americans, he quickly proclaimed that Bush was within his legal rights to spy without warrants in violation of FISA.  Sunstein defended Bush's NSA program by embracing the two extremist arguments at the core of Bush/Cheney lawlessness:  that (1) the AUMF silently authorized warrantless eavesdropping in violation of FISA and, worse, (2)  the President may have a plausible claim that Article II "inherently" authorizes warrantless eavesdropping regardless of what a statute says.

In a March, 2006 Washington Post article, Sunstein solidified his credential as Leading Democratic-Law-Professor/Bush-Defender by mocking the notion that Bush had committed crimes while in office:

[Harvard Law Professor Laurence] Tribe wrote [Rep. John] Conyers, dismissing Bush's defense of warrantless surveillance as "poppycock." It constituted, Tribe concluded, "as grave an abuse of executive authority as I can recall ever having studied."

But posed against this bill of aggrievement are legal and practical realities. Not all scholars, even of a liberal bent, agree that Bush has committed "high crimes and misdemeanors." Bush's legal advice may be wrong, they say, but still reside within the bounds of reason.

"The Clinton impeachment was plainly unconstitutional, and a Bush impeachment would be nearly as bad," said Cass R. Sunstein, a professor of constitutional law at the University of Chicago. "There is a very good argument that the president had it wrong on WMD in Iraq but that he was acting in complete good faith."

Sunstein argues that Bush's decision to conduct surveillance of Americans without court approval flowed from Congress's vote to allow an armed struggle against al-Qaeda. "If you can kill them, why can't you spy on them?" Sunstein said, adding that this is a minority view.

In 2008, Sunstein became the leading proponent of the Bush/Cheney-sponsored bill to legalize Bush's warrantless eavesdropping program and to immunize lawbreaking telecoms, a bill which Obama -- advised by Sunstein -- ended up voting for in violation of his pledge to filibuster.  The same year, Sunstein provoked widespread anger among progressives by insisting (again) that investigations and prosecutions of Bush officials would be inappropriate and harmful.  As summarized by Talk Left's Armando, a long-time lawyer:  "Cass Sunstein has been defending the Bush Administration's illegal actions and the Bush Administration's preposterous claims for many many years now. This is who he is."  Hey, Left:  doesn't the thought of Supreme Court Justice Cass Sunstein make you tingle with "excitement," just as Peter Baker said?

Even in domestic policy, Sunstein is far away from "the Left."  As Matt Yglesias put it last April after Obama nominated him to be head of White House regulatory policy:  his "views on regulation are, if anything, somewhat more conservative than those of most Democrats."  In reviewing Sunstein's domestic policy book, Nudge, Matt Stoller pointed out that several of his ideas are "exactly 100% out of the conventional wisdom from the 1960s conservative movement," that he steadfastly exempts the Pentagon and the Surveillance State from claims that the Government is too large, and even holds up Rahm Emanuel as a "liberal," just to give a sense of how Sunstein views the political spectrum.  As I discussed earlier this year, Sunstein also proposed a consummately creepy plan for the government to "cognitively infiltrate" online discussions which spout views that Sunstein deems false.

Along with TNR's Jeffrey Rosen, it was Sunstein who took a leading role in telling Democrats that John Roberts was a good choice for the Court.  While Rosen has acknowledged he was wrong in his assessment -- because Roberts turned out to be exactly the judicial radical which liberals said he was (while Rosen/Sunstein derided liberals for saying so) -- Sunstein continued to praise Roberts and Sam Alito for their rulings.  A former student of Sunstein's at Chicago Law School, the very smart liberal blogger Kathy G, detailed Sunstein's record in a comprehensive post, including his expressed affection and admiration for the executive-power-loving radicals of the Federalist Society which, among other things, produced John Yoo (she also notes Sunstein's view that Roe v. Wade was "wrongly decided," though he doesn't favor its overruling).  As she aptly put it:

I think Sunstein is an extremely ambitious man who basically would run over his own grandmother for a seat on the Supreme Court (well, he'd think seriously about doing so, anyway). Seeing how powerful the right wing has been in this country (at least until recently), especially regarding the courts, Sunstein must know that if he wants to be a Supreme Court justice, it would help if he were cozy with the right and accepted many of their basic ideas (such as judicial "minimalism," which he has advocated), albeit with a more centrist spin. It obviously would also help his popularity with the right if he were to refrain from bruising conservatives' tender feelings by pointing out such inconvenient truths as the fact that the current administration is a pack of dangerous, despotic war criminals.

Indeed, for all of these reasons, Sunstein has been praised by the Right as one of Obama's best picks while consistently opposed by "the Left."

Given all this, I have no idea what would possibly lead Baker to claim that Sunstein would be a favorite choice of the Left for the Court, though I can guess:  the fact that the incoherent Glenn Beck -- for some inexplicable reason -- has made Sunstein a prime target of his deranged rantings about The Imminent Takeover of Leninism leads Baker to believe that Sunstein must be beloved by the Left.  He most assuredly is not.  Ironically, with this administration and in our political culture, the perception that a Sunstein appointment would "excite the Left" is probably the best way to ensure he is not chosen for the Court, as nothing is more fatal in Washington than being viewed as Liked by the Left.  Just ask Dawn Johnsen about that, if you can find her (indeed, reflecting How Washington Works, Baker immediately says of the candidates he identifies as The Left's Favorites:  "insiders doubt Mr. Obama would pick any of them now").  So it's arguably productive to let this view of Sunstein stand, as false as it is.

The person who many believe is the leading candidate to replace Stevens -- Obama's Solicitor General Elena Kagan -- has a record that is almost as bad as Sunstein's when it comes to executive power abuses, civil liberties, and "War on Terror" radicalism.  Unlike the Sotomayor-for-Souter substitution, which essentially maintained the Court's balance, replacing Stevens with the likes of Cass Sunstein or Elena Kagan would move the Court dramatically to the Right, especially in the areas of executive power and civil liberties, where a fragile 5-4 majority has provided at least some minimal safeguards over the last decade.  Whatever else one might want to say about Cass Sunstein -- or, for that matter, Elena Kagan -- it is simply false to claim that they would fit within the so-called "liberal" wing of the Court on matters of executive power and civil liberties.  The replacement of John Paul Stevens could have a very radical impact on the Supreme Court, and it's certainly not too early to begin combating pernicious myths about the leading candidates.