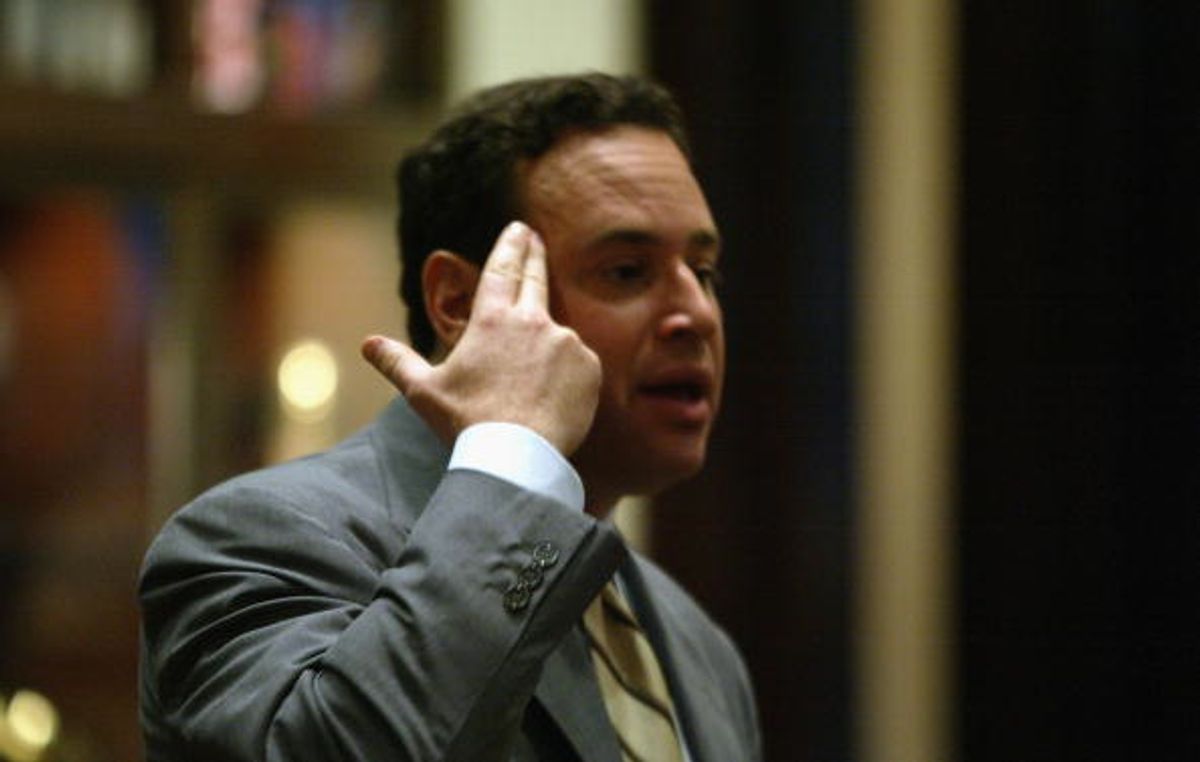 BEL AIR, CA - JUNE 8: Author of 'An End to Evil- How to Win the War on Terror' David Frum at the How To Win The War Against Terrorism - A Discussion And Cocktail Party on June 8, 2004 in Bel Air, California. (Photo by Frazer Harrison/Getty Images) (Getty Images)
--

These past few days, conservatives have been trying to sort through their defeat on healthcare reform. Did they have the right strategy? Should they have cooperated more? Made different counterproposals?

Frum's latest crime: writing an attention-grabbing post on his blog, arguing that conservatives had made their own Waterloo by refusing to strike a deal on healthcare. His punishment? Exile.

Frum posted on his blog yesterday that he'd been booted from his perch at the American Enterprise Institute, the conservative think tank where he's worked for years. After his dismissal lunch with AEI President Arthur Brooks, Frum posted his resignation letter online.

This will memorialize our conversation at lunch today. Effective immediately, my position as a resident fellow at the American Enterprise Institute is terminated. I appreciate the consideration that delays my emptying of my office until after my return from travel next week. Premises will be vacated no later than April 9.

I have had many fruitful years at the American Enterprise Institute, and I do regret this abrupt and unexpected conclusion of our relationship.

This morning, Frum explained to Politico that he's a casulty of the war of the rabid conservative base against its elite wise men. "The elite isn't leading anymore. It’s trapped. Partly because of the desperate economic situation in the country, what were once the leading institutions of conservatism are constrained. I think Arthur took no pleasure in this. I think he was embarrassed."

The elite-versus-base distinction he’s drawing here -- in addition to being rather off-putting -- is fairly absurd: does AEI really have a mass donor base among small-town, middle-class Republicans? The "Donate Now" part of the website wants to know if you're a corporation, a foundation or an individual. (Individuals, by the way, are welcome to donate by transferring stock to AEI.)

Still, the basic idea of an institutionally-enforced conspiracy of silence jibes with a story told by Bruce Bartlett, another conservative pragmatist and a friend of Frum.

Since, he is no longer affiliated with AEI, I feel free to say publicly something he told me in private a few months ago. He asked if I had noticed any comments by AEI "scholars" on the subject of health care reform. I said no and he said that was because they had been ordered not to speak to the media because they agreed with too much of what Obama was trying to do.

But folks from inside the think tank who spoke to Politico have another explanation. Frum has been at AEI since he left the White House in 2003. But he rarely showed up in the office, and his absence was visible: books and packages were piled up outside his door, even as he stayed on payroll, at $100,000 a year. His argument was that he was doing AEI’s work -- advancing conservatism -- through his writing at his blog and elsewhere, his commentary on the radio and television, and his general work as a pundit-at-large. Brooks himself, the president of AEI, denies that Frum was fired over the "Waterloo" piece.

Both of these stories are probably true to some degree. It turns out that Frum wasn’t so much fired as he was asked to continue for no pay -- obviously tantamount to getting the sack, but slightly more decorous. That does make it sound like Brooks was under pressure from donors to stop forking over their dollars to apostate Frum.

Ironically, Frum himself has played the Brooks role of the heavy in an intra-party fight before. In March 2003, he wrote a feature for National Review entitled "Unpatriotic Conservatives," which amounted to an argument for why neoconservatives deserved supremacy within the Republican Party and the conservative movement. Frum tiptoed right up to calling "paleoconservatives" like Pat Buchanan fascists, and ended on this note:

They began by hating the neoconservatives. They came to hate their party and this president. They have finished by hating their country.

War is a great clarifier. It forces people to take sides. The paleoconservatives have chosen -- and the rest of us must choose too. In a time of danger, they have turned their backs on their country. Now we turn our backs on them.

You won’t find much of a defense of Buchanan or the paleoconservatives here, but that kind of bombast -- "war is a great clarifier" -- sure doesn’t look great in retrospect. Frum and his allies weren’t just trying to drum some unsavory types out of the movement. They were also working at making it impossible for a Republican to oppose the party line on the crucial issue of the day -- an issue on which they turned out to be disastrously wrong themselves.

Now that Frum is the right wing's victim, rather than its enforcer, he's easy to sympathize with. But it seems that the fundamental problem is more in the idea that conservatism has to be a monolith at all times. For a movement that has become obsessed with warding off the evils of socialism, the right wing does dearly love a purge.