My terror of ending up an old cat lady

As a newly single 26-year-old, I can't shake my fear of never getting married -- and I'm not alone 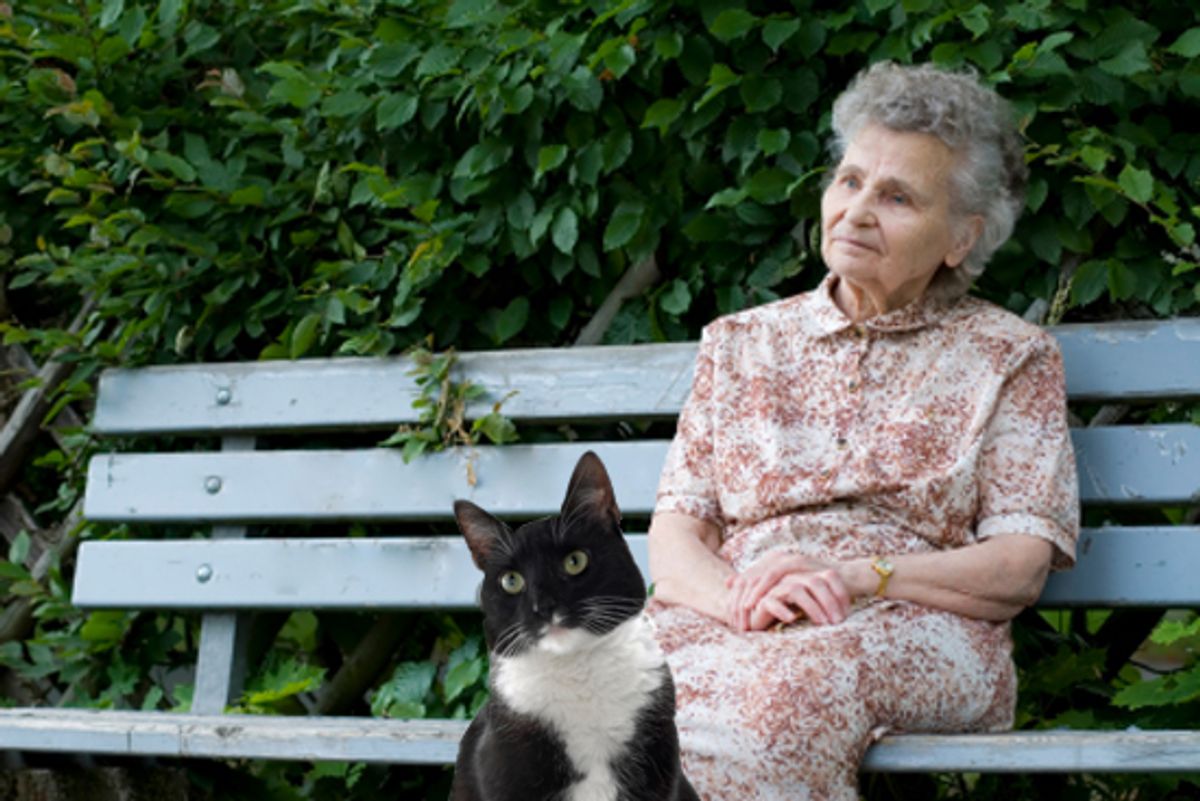 The current caricature of young women today would have you believe that they are tossing off tradition (along with their T-shirts -- woo, Spring Break!) and carelessly pursuing drunken hookups instead of marriage. But a new study has found that the "spinster" stigma is still alive and thriving -- and it's worst for women in their mid-20s to mid-30s. After reaching the age of 25, LiveScience explains, women begin to feel "scrutinized by friends, family members and others" -- including themselves, of course -- "for their singlehood."

After a long-distance relationship of nearly three years, I recently found myself "back on the market" -- a vomitous phrase that, so far, seems to accurately convey the experience of being single. The breakup was a result of many things: namely, the unresolvable distance (the recession damned his attempts to move to be with me, my career aspirations discouraged a move to be with him) and, ultimately, a nagging suspicion that I'm not quite ready to settle down -- particularly if it involves several more years of committed separation.

So, we broke up and I promptly bought Lori Gottlieb's "Marry Him: The Case for Settling for Mr. Good Enough" in an act of masochism. That's right: My feminist, casual-sex-defending self went out and purchased the very book that has set the world of ladyblogs aflame. Because, what if I was being too greedy or asking for too much from life? Was I like one of those jerks on "Who Wants to Be a Millionaire" who just can't walk away with their earnings and has to risk it all for the big prize? Was I the old lady at the casino who keeps pulling that lever -- more, more, more? Show me what's behind all the doors, Bob, even if that means I don't win anything!

Here's another metaphor: musical chairs. I've been standing back and evaluating the furniture (hmm, the sophisticated Le Corbusier chaise or the unassuming La-Z-Boy that's losing its stuffing?) amid the desperate land grab at hand. Or: A fire sale -- you know, the ones where people inevitably get trampled, sometimes killed, amid the madness. I'm browsing the store, trying clothes on instead of just stuffing them in my shopper, while the smart ones are grabbing all the good loot and heading for the damn checkout line. Oh, I've got plenty more analogies, but you get the idea.

Just this week, my eyes bugged out of my head when I came across this old Newsweek cover with a large graph illustrating the grim prospects for women marrying after their 20s. Sure, the cover story is 24 years old, its predictions have since been proved wrong and the magazine had to retract the article's infamous line about single women of a certain age having a greater chance of being "killed by a terrorist" than marrying. I had even come across the piece years before in a women's studies class in which it was eviscerated as a lame product of feminist backlash. No matter! These details are rather inconsequential in the face of such deeply ingrained anxieties.

At the time of the "Marriage Crunch" issue, Ellen Goodman wrote: "How gleefully they warn that an uppity woman may be overqualified for the marriage market. Reach too high, young lady, and you'll end up in the stratosphere of slim pickings." Decades later, that warning has been passed along fully intact and internalized even by supposedly enlightened young feminists like myself. It just goes to show how cunning and insidious that prince charming, fairy-tale ending is. I know this as well as anyone -- for god's sake, my current desktop image comes from a series of photos that skewer "happily ever after" by depicting the depressing, real-life outcomes for Disney's princesses. (Snow White, for example, is barefoot with a baby on either hip, and two more at her feet, and her prince sits in his living room throne watching TV, sipping beer and noshing on potato chips.)

Intellectually, I reject these things; I am constitutionally opposed to such ideas. But, like a nonbeliever who goes to church every once in a while just to play it safe and not damn themselves to hell, should it exist, I've found myself doing post-breakup penance. I recently announced to my mother that I was going to end up a lonely cat lady, and I don't even like cats.  It was a culturally obedient display of self-flagellation -- and, thank you, intrepid researchers, for reminding me I'm far from alone in that.