What the healthcare bill means for abortion 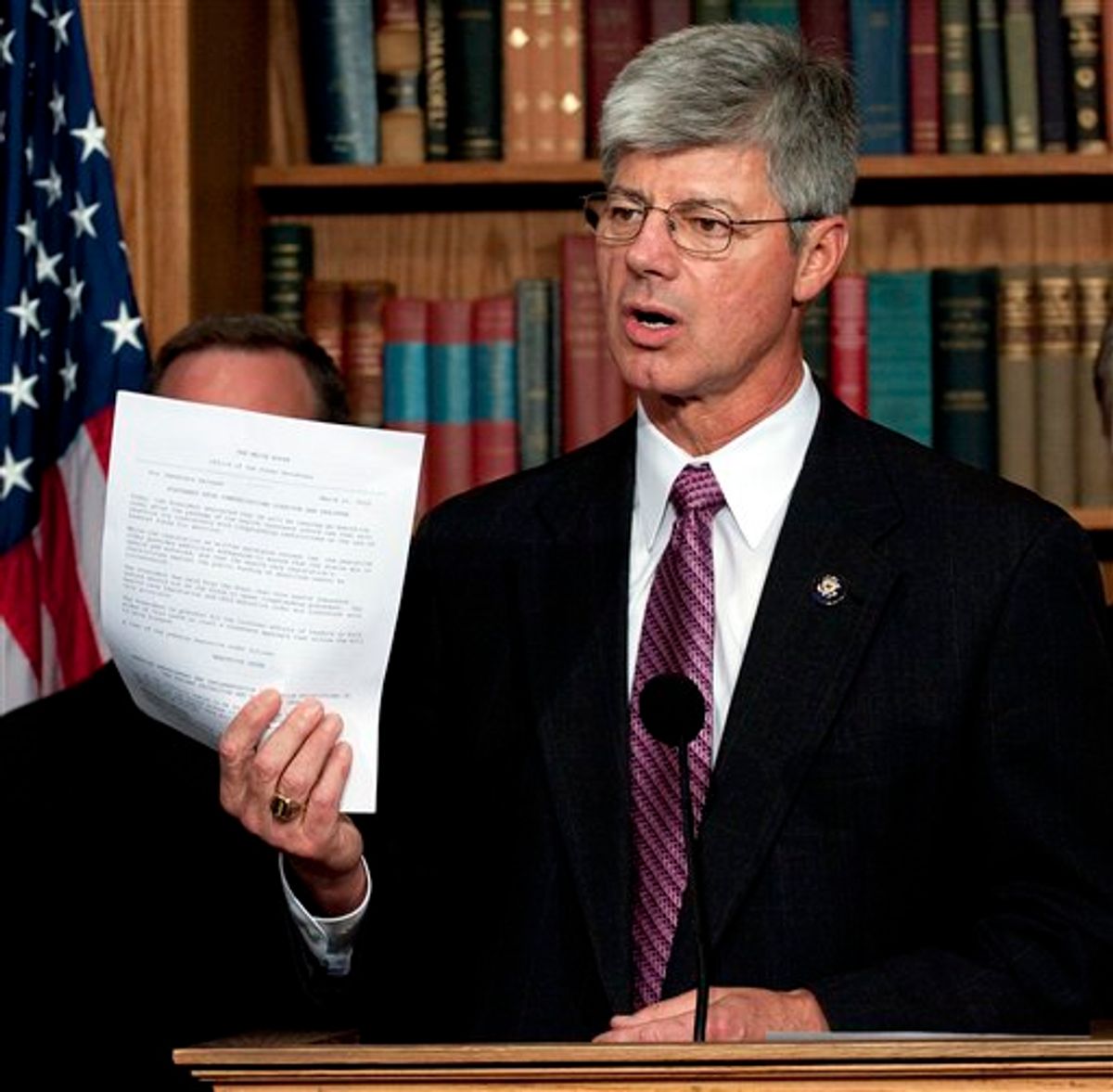 Rep. Bart Stupak, D-Mich., announces he will vote to pass the health care reform bill after President Obama agreed to sign an executive order reaffirming the ban on the use of federal funds to provide abortions as the house prepares to vote on health care reform in the U.S. Capitol in Washington, Sunday, March 21, 2010. (AP Photo/Harry Hamburg) (AP)
--

During the celebration over the passage of healthcare this week, a noticeable number of pro-choicers could be found staring into their drinks and dejectedly contemplating what it all means. Have Democrats sold out pro-choice women? Were we thrown under the bus? Do Dems owe us now? What does the president's executive order on abortion mean in real terms? How is it different from the existing Hyde Amendment?

All week long, we've been following some of our favorite thinkers' public cogitations, because, hell, we're desperate to know what it all means, too. So, as the week comes to a close, we're rounding up some of the best takes on these tough questions. Consider this your CliffsNotes for the weekend's cocktail conversations.

Katha Pollitt at The Nation:

You can call prochoice leaders hypocritical or cowardly or feeble or excessively deferential to the president's agenda. But one thing you can't call them is selfishly obsessed with their own political purity. That would be the antichoicers -- the Catholic bishops, Bart Stupak, Ben Nelson. They were the big evil babies who were willing to let millions suffer and 45,000 people die every year unless they got to deprive women of their reproductive rights.

There will be no payback to reproductive rights organizations. ... You don't get payback in politics for rolling over. Wins come because you have power and exert it strategically. The pro-choice community in Washington has shown that it did not have the power to live up to its commitment.

[T]his time, at least, pro-choice advocates were not as willing as their pro-life counterparts to be the skunks at the garden party "just" to save access to abortion, or perhaps because they feared losing their own access to Democratic politicians who, unfortunately, too easily sacrificed the pro-choice movement for a political victory without putting up much of a fight on behalf of the pro-choice women who elected them.

Dana Goldstein for The Daily Beast:

The result of unaffordable abortion is another mouth a working-class mother cannot afford to feed, house, or educate during a time of record unemployment. That's the kind of "choice" we have in America today -- limited to those who can afford to pay. I'd like to say I'm hopeful that feminist groups and progressive allies can reverse this trend, but I'm not. Confronted with the GOP filibuster threat, the Democratic Party wholly failed to deliver on its promise to support reproductive rights for rich and poor women alike, and there isn't any other viable political movement to turn to.

Laying aside the practical realities of withholding federal funds from women who need them for a legal medical procedure, the symbolism of this maneuver is horrendously illiberal and, frankly, un-American. The Hyde Amendment has been more deeply entrenched by presidential fiat, and the bodily autonomy of half the population of this country has been once again treated like a bargaining chip by the one party who claims to defend their equality.

Although the Hyde Amendment is repeatedly renewed, it is not a law on the books per se. It must be renewed each year as part of the budget. This means that every year we have the opportunity to get rid of it (although we have as yet been unsuccessful). An executive order, in contrast, would put these provisions on the books until it is rescinded. It is much harder to rescind an executive order than to change language that must be inserted in the budget yearly. Really, what president would stick his neck out for the 1/3 of women who will need abortions? If we are to be guided by history, nobody.