His false claim of office gunshots functioned as the Ashley Todd tale of 2010, distracting from right-wing violence 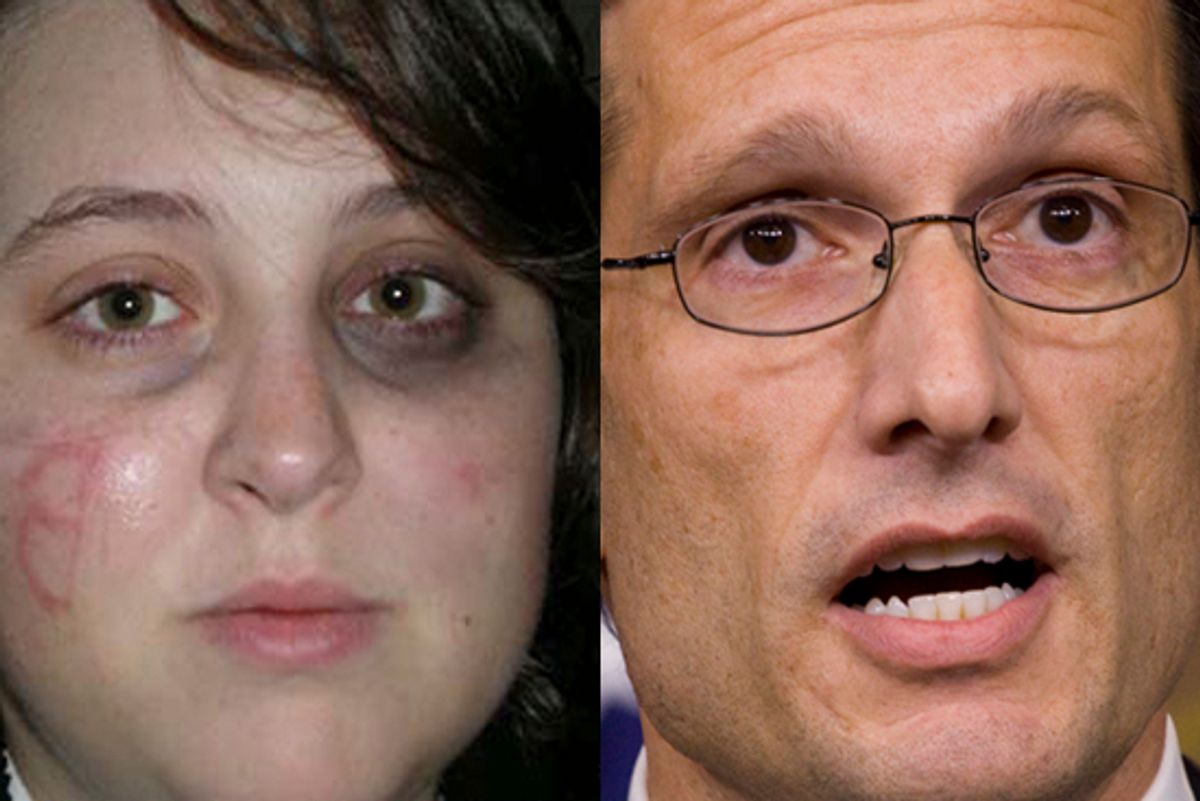 Did House GOP Whip Eric Cantor just become 2010's answer to Ashley Todd, the white McCain supporter who claimed she was assaulted by a black Obama backer in October 2008?

You remember the story: A 20-year-old McCain-Palin volunteer told Pittsburgh police that a black man robbed her, and then, when he saw a McCain bumper sticker on her car, he beat her and carved a B – for "Barack" -- into her cheek, and told her she better support the black Democrat. Days later, the clearly disturbed Todd confessed that she made up the attack, and apparently mutilated herself to provide "evidence." But for a few days, the right wing insisted Todd's attacker was the Democratic equivalent of the menacing crowds at Sarah Palin rallies shouting "Kill him!" and "Terrorist!" about Obama. Drudge and Fox News hyped the story, with Fox news V.P. John Moody even claiming the attack might lead some voters to "revisit their support for Senator Obama."

No one's accusing Cantor of shooting up his own office, but from the minute he made his claim -- also implying he was targeted because he was Jewish -- it was almost certain to be untrue. In the very first AP report on the incident, the Richmond police  said the bullet had been fired into the air, not through Cantor's window. Two photos in Salon show that the nondescript office building is unmarked, with no signs indicating Cantor or his staff have one of the suites inside. Friday Richmond police confirmed the bullet was a stray: Neither Cantor nor his office was targeted, and in fact the bullet didn't even land in his office. A spokesman for Cantor told reporters he was "very happy" his story turned out not to be true.

But just as Ashley Todd's tale interrupted a narrative of right-wing menace and near-violence about Obama, briefly letting commentators tsk-tsk about extremes on both sides, Cantor's claim interjected the same kind of false equivalence. On CNN Thursday night, Gloria Borger insisted not only should tea partiers rein in their members, but "Move On too" (h/t Greg Mitchell). It's crazy time.

Remarkably, right around the same time Canter's tale was unraveling Friday, Sarah Palin was whipping up a crowd in Tuscon on behalf of John McCain, yet another echo of 2008. Dressed in snug black leather, the woman who told her Twitter followers "Don’t retreat--RELOAD" and put vulnerable Democrats in rifle cross hairs on her Facebook page ridiculed "this BS coming from the lame-stream media" about "us common-sense conservatives kinda inciting violence," but added, "We know violence isn't the answer. When we take up our arms, we're talking about our vote." Reload the vote? Move over, Rock the Vote!

Meanwhile, even though Ashley Todd's bumper sticker story fell apart, police in Nashville say a Democrat was attacked over his Obama-Biden bumper sticker on Thursday. Mark Duren was driving his 10-year-old daughter home from school when an angry Harry Weiseger flipped him off, and then began ramming Duren's car from behind. Nashville police charged Weiseger with felony reckless endangerment.

So let's recap: AP said Thursday that at least 10 congressional Democrats now have reported threats and menacing harassment, including incidents at their offices in New York, Arizona and Kansas. Others, including antiabortion healthcare supporter Bart Stupak, have received death threats, and an undisclosed number of lawmakers have been given increased police protection. Into that climate of real danger, Cantor inserted his own easily disproven claim of violence. And that's not all he did: He accused Democrats of increasing the risk of violence against themselves by complaining about it. "By ratcheting up the rhetoric, some will only inflame these situations to dangerous levels," Cantor claimed. "Enough is enough. It has to stop."

That part Cantor is right about: It has to stop. But don't look to any GOP leaders to make sure it does.