George Lucas, the most hated filmmaker in America

More than a decade after "The Phantom Menace," a documentarian examines why "Star Wars" fans just can't forgive 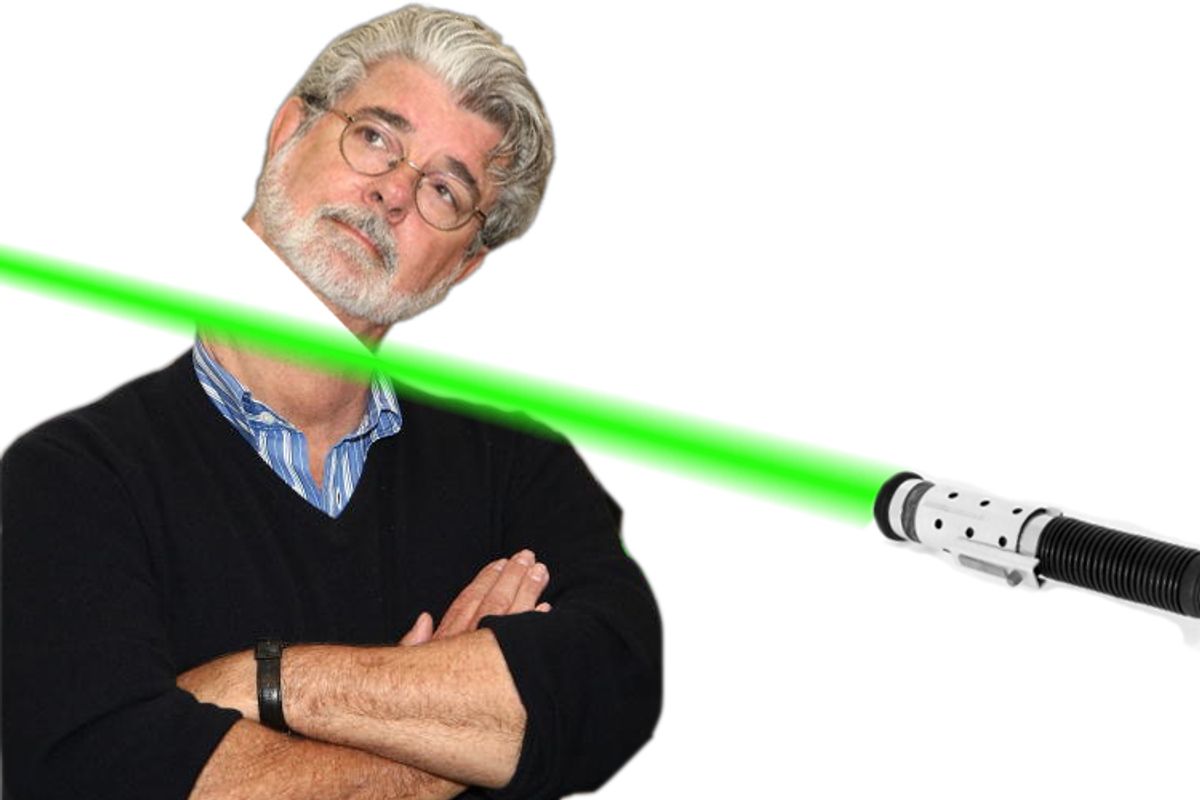 In 1977, George Lucas released "Star Wars," 121 minutes that changed what people thought about film. In 1999, Lucas released "The Phantom Menace," 136 minutes that changed what people thought about George Lucas. The film was panned by everyone save 7-year-old boys who fast-forwarded the scenes about trade embargoes and Senate votes of no confidence. Critics and fans were horrified, even betrayed, by the creative dissonance: How could the man who created Darth Vader give life to the bankrupt slapstick of Jar Jar Binks?

Alexandre O. Philippe's "The People vs. George Lucas," which recently debuted at SXSW, attempts to discover what went wrong. The Swiss-born Philippe conducted copious interviews and combed through fan-submitted videos — rants, puppet shows, 3D-animated shorts — and found no lack of fervor on the subject, both defending the man and vilifying him. But there was one party who refused to participate: George Lucas himself.

Salon talked with Philippe over the phone about who owns "Star Wars," why Midi-chlorians ruined the Force — and whether disappointed fans should just walk away.

Part of the challenge for us was that people thought we were out to demonize George Lucas, that we wanted to give "Star Wars" a bad name, and that we should die. I wanted to provide a debate. Some of the letters got pretty nasty and were actually a bit scary.

Could the same documentary be made for "Lord of the Rings" or "Star Trek"?

There is a unique conflict between George and his fans. There's nothing quite like it in pop culture. What sets "Star Wars" fans apart, at least the original generation, is their love-hate relationship with the creator. The film is an examination of that dysfunctional relationship.

What did the original "Star Wars" movies get right that the new ones got wrong?

What the original trilogy did was provide our generation with something we had never experienced before. It's hard for people to understand today. Even people who see "Avatar," for instance, think it's clearly magical and visually stunning, but there's still a precedence of special-effects movies leading up to it. "Star Wars" was unlike anything that we had ever seen, and it just blew us away in such a profound way that it became the story of our childhood.

Isn't part of the appeal of "Star Wars" the story itself?

The beautiful thing about "Star Wars" as a story is that it's not anything new. It's pretty straightforward in terms of archetypes. George found a way to put a unique spin on it and create well-defined characters that you instantly identify with. Looking at Hollywood movies today, obviously they've got their actors and special effects down, but where some of these movies fail is the scriptwriting. How can you put $200 million into a movie and have a mediocre screenplay? It's unfortunate. I can't think of a film that has a weak story and really succeeds.

Did fans expect too much from the new films? Would "The Phantom Menace" be a success if it weren't a part of the franchise?

I think if there were no precedent, "The Phantom Menace" would have flopped. I don't think we'd be talking about it right now. It's the fans' hatred that keeps it alive.

Did Lucas simply get complacent?

You have to try to put yourself in his shoes. What's it like when you're this young rebel filmmaker who is fighting against the system and creates this one thing that becomes so powerful that it takes over your life, and suddenly you find yourself at the head of this billion-dollar empire? Would any of us have done any differently? Would any of us have not taken advantage? What saddens me is that one of the most promising filmmakers of all time hasn't, as a director, made a movie since "Star Wars." He has not been able to break free, and that's the tragedy of George Lucas.

Are fans justified in claiming that Lucas has actually ruined the original movies with the later ones?

A lot of fans are saying things like the Midi-chlorians, for instance, ruined the idea of the Force. The fact that Jar Jar Binks essentially nominates Emperor Palpatine is a huge deal, because now Jar Jar Binks is not just this character you can forget about. He is an essential character in the "Star Wars" saga. That bothers people. But then again, fans also have a choice. They don't have to torture themselves.

Sometimes "Star Wars" fans act like they own the franchise. Does the public have any right telling Lucas what to do with his movies?

This is the central question of our film, and there's no real answer for it. You can look at it from both a legal perspective and a moral perspective. Legally, there's no question: "Star Wars" belongs to George Lucas. Morally, we're talking about a piece of art that has been embraced by culture for over three decades and has become a part of our national heritage. So you can certainly make the argument that "Star Wars" also belongs to the fans.

Unlike "Star Wars," your film has lots of fan participation. You hail it as one of the first digital democratic documentaries.

Participatory documentaries are becoming more and more common. I think the whole issue of intellectual property and copyright law in the digital age is a very tricky one. On the one hand, I understand the importance of copyright and owning your work. People who pirate it and make it available to everybody else — that's not cool. People work hard to do what they do and should be entitled to make money. But at the same time, we also live in a culture where we're sharing and remixing a lot of things, and as a result people are using copyrighted material.

Are you worried that people who don't care about "Star Wars" won't watch your film?

Not at all. From the response at SXSW it became obvious that this was wider than just a fan film. We're touching on issues that would be of interest to anyone interested in pop culture. I think it transcends "Star Wars" fandom.