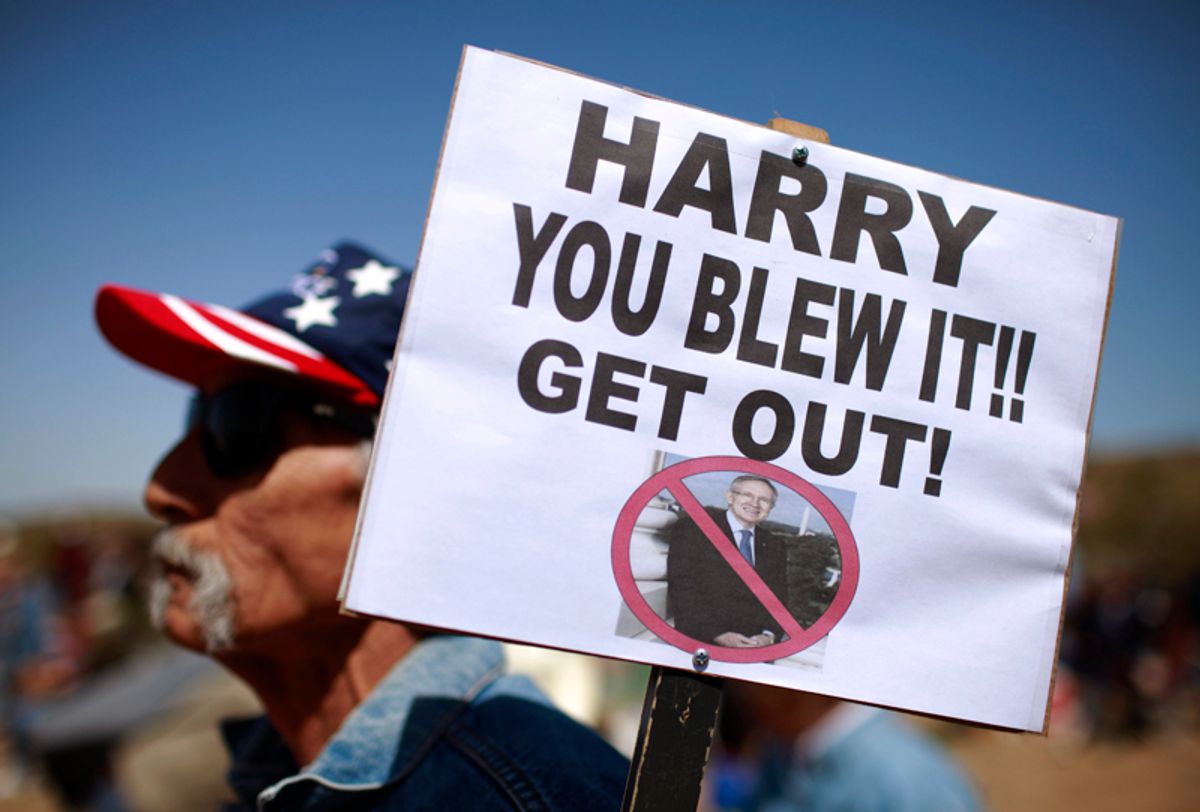 SEARCHLIGHT, Nev. — Before the business of bashing Senate Majority Leader Harry Reid could begin in a field outside his hometown, the leaders of the Tea Party Express just had to get something off their chests.

They had to call out Jon Scott Ashjian, the upstart U.S. Senate candidate who’s running as the representative of the brand new Tea Party of Nevada -- and whose presence in the race threatens to drain votes from the Republican column and potentially save the embattled Reid.

“We are united in opposing the Tea Party of Nevada, which never has been and never will be affiliated with grass-roots effort in Nevada,” said Debbie Landis of Anger Is Brewing.

Republicans, Libertarians, independents, Democrats and even members of the ultra-right Independent American Party all got a chance to speak at Saturday’s much-hyped anti-Reid rally. But not the tea party candidate himself. Maybe going rogue only works for Alaskans. The irony spoke volumes: Helping the Republican Party, it seems, is the top priority of the Tea Party Express.

This should be no surprise. The organization was launched by two California Republicans (one a consultant, the other a politician), and is already running an Internet ad campaign distancing itself from Ashjian. (Word apparently hadn’t reached some of the tea partiers in Searchlight. One attendee from Las Vegas said he was leaning toward Republican Senate candidate Danny Tarkanian, but hadn’t ruled out Ashjian.)

According to polls conducted by Mason-Dixon, a third-party spoiler is just about the only thing standing between the GOP and Harry Reid’s Senate seat. The Senate majority leader’s approval rating is at an all-time low in his home state, and the top three Republican candidates -- Tarkanian, Sue Lowden and Sharron Angle -- all win in head-to-head matchups. But if you throw a Tea Party candidate into the mix, then Reid snags a slim lead.

That’s why Ashjian has been accused of being a Reid plant and a saboteur of the GOP. (Tarkanian has even suggested that Ashjian’s candidacy is aimed at splintering the state’s Armenian vote.) Whatever you want to say about Ashjian, though, you definitely can’t accuse the guy of being a stooge for the GOP, a charge that can be leveled against the Tea Party Express.

Unseating Harry Reid is what brought the Tea Party Express and its 8,000 followers out to a Reid “retirement party” in this small Mojave Desert town more than an hour south of Las Vegas. Many people camped overnight in their R.V.s at the rally site, about two miles from town. Others left California, Utah and Arizona at 4 a.m. to beat traffic.

Most of them didn’t come really come for Reid. They were actually there to see Sarah Palin. The former governor of Alaska (for a half-term or so) came fresh from an appearance with Sen. John McCain, who is facing his own tough primary race in Arizona against a candidate with substantial tea party support. No one at the rally seemed to hold her association with a known RINO against her.

“She’s our Ronald Reagan,” said Henry Postma, from Mobile, Ala. “I’m not worried that she would [appear with McCain]. She’s loyal and she’s an honorable person.”

Palin, days after urging her supporters to “reload” in the face of President Obama’s healthcare reform victory, steered clear of any statements that could be construed as extreme. All the speakers made it clear that they weren’t advocating violence, undoubtedly a nod to the threats against pro-reform Democratic lawmakers that dominated the news this week.

“When we talk about fighting for our country, we’re not talking about violence,” Palin said. “Our vote is our arms.”

There was no talk of death panels. Nothing about President Obama’s birth certificate. It sounded like a stump speech, with a little Reid-related red meat to satisfy the locals. The crowd serenaded her with chants of “Run, Sarah, run!” that were probably audible from Reid’s house, just two hills over.

“The problems we face now are nothing that a good old-fashioned election can’t fix,” she said.

And an election campaign is exactly what it felt like. The grass roots never looked so slick. The Tea Party Express rolled up in a caravan of deluxe tour buses. Meanwhile, their followers had to rough it in unseasonably cold temperatures, on a graded field whipped by the wind. Most of the audience crowded into a small square in front of the stage, with a few of them spreading onto the rocky hillsides studded with Joshua trees.

Some of the speakers tried to put a positive spin on the awful conditions. They described the gusts as the winds of change (although they apparently discerned no meaning in the harsh sand that the winds carried).

The crowd was mostly white, polite and well-behaved, with most of its members approaching retirement age or over. License plates and cheers identified most of them as Californians, although Nevada was also heavily represented. Unlike tea parties past, it was tough to find political novices. William Temple of Georgia, who dressed as Declaration of Independence signatory Button Gwinnett, got involved in the movement last April, and has since attended conservative political conferences around the country.

These days, the Tea Party Express is pretty flashy -- especially for something that’s billed as a grass-roots movement. Skywriters took to the air to scrawl the messages, “No new taxes,” “We the people,” and “Vote Reid Out.”

If anything, Palin’s rock star presence undercut the rally’s anti-Reid purpose, even as it energized the crowd. Republican candidates for U.S. Senate were pushed to the end of the program, after Palin arrived, so the star wouldn’t miss her high-noon slot. By the time the GOP Senate front-runner, Sue Lowden, took her turn, the crowd had dwindled to about 1,000, many from California and Arizona. Tarkanian, her closest rival (and a favorite of many tea party activists in the state), didn’t even wait around. Lowden, like Palin a former beauty queen, said the schedule change didn’t bother her.

“We knew that was going to happen from the beginning,” she said.

She was reduced to asking for money, not votes, from the mostly out-of-state crowd. So much for the showdown: The two biggest threats to Harry Reid barely even got a chance to draw their guns.

Reid, who enjoys broad support in his hometown, set up his own supporters two miles down the road, inside the city limits. Early morning plans for a hospitality tent serving doughnut holes and tea had to be scrapped due to the wind. But about 200 supporters from Searchlight and the Las Vegas area braved the weather to show their support for the senator. Reid himself stayed away from his hometown, spending the day celebrating the completion of a public shooting park near Las Vegas that he secured funding for.

Searchlight is just a blip of a town, an old mining camp that barely survived the bust. It doesn’t have a single stoplight. Many residents live in trailers, and most commerce comes from travelers passing through on their way to somewhere else.

And that’s exactly what the tea party people did, almost as soon as Palin stopped speaking. Many of the Nevadans headed to Henderson, a suburb of Las Vegas, where Ann Coulter was scheduled to speak. They didn’t bother to hear from the candidates vying to oppose Reid. It’s probably because most of them have already made up their minds and know which candidate they like: Sarah Palin in 2012.

Amy Kingsley is a Las Vegas-based reporter. Originally from Austin, Texas, she got her master's in journalism from the University of North Carolina at Chapel Hill. Amy covers news and politics for Las Vegas CityLife.