Let's face it: The Red State blogger is just another conservative "sore loserman" who can't get over 2008 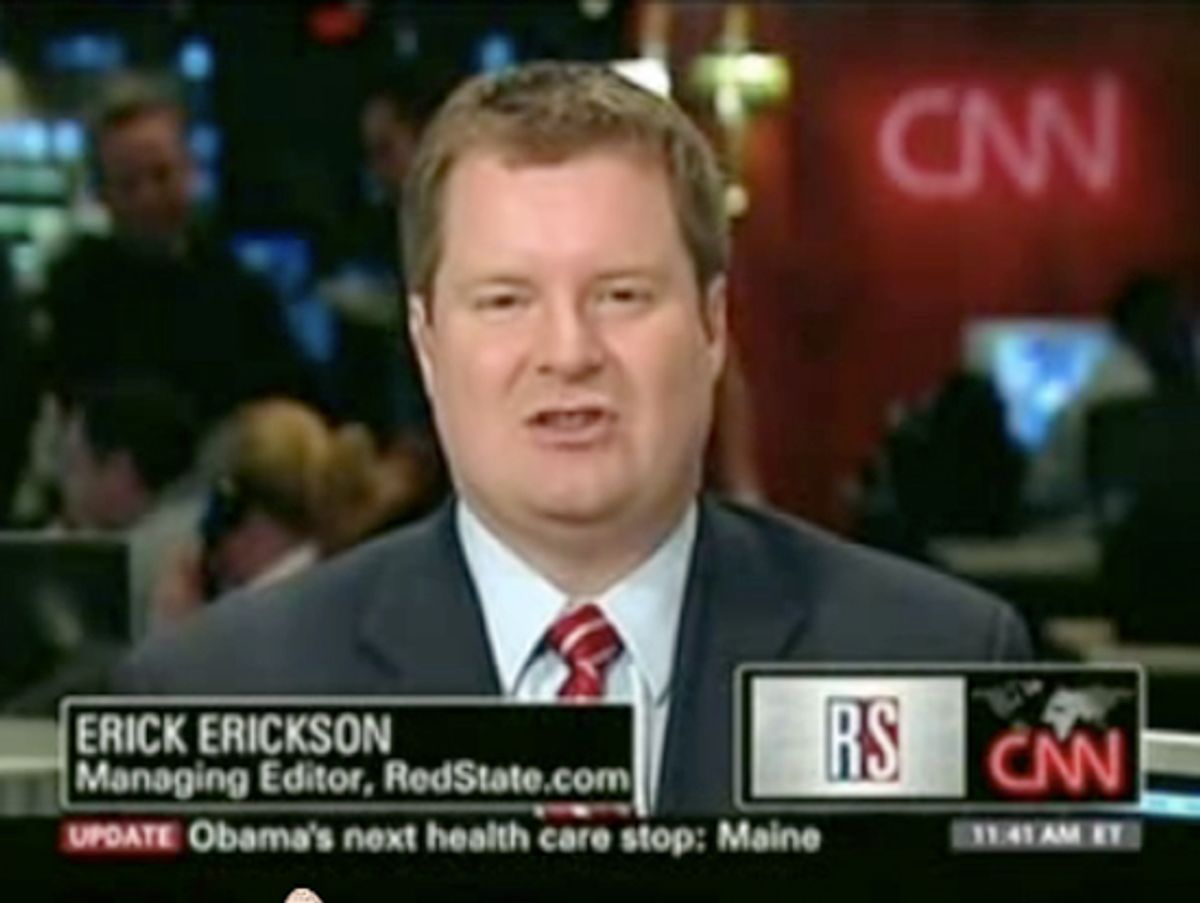 If you want to see a shining example of a right-wing moral cripple, meet CNN's newest gasbag, Eric Erickson. He appeared on Howard Kurtz's show today and C&L caught the exchange:

KURTZ: Erick Erickson made his debut this week as a CNN contributor. He is a Georgia lawyer, a church deacon, and managing editor of the conservative Web site RedState.com. Erickson's hiring generated a great deal of publicity, most of the decidedly negative variety.

I spoke with him earlier from Atlanta.

ERICKSON: Thanks for having me.

KURTZ: You have been getting hammered by liberal commentators since CNN decided to bring you on as a contributor to John King's program, and it all revolves around the things that you have written. So let's just go through some of them.

KURTZ: On the administration's health care spokeswoman, you wrote, "Linda Douglass is really the Joseph Goebbels of the health care shop."

You're comparing her to a notorious Nazi?

ERICKSON: Yes, to propaganda. I probably shouldn't have said that. And to be honest with you, I got her confused with one of the congressmen who, the same day she came out and was urging people to begin e-mailing in to the White House the -- forwarding on the e-mails from friends who were "misrepresenting" the president's health care plan, a congressman came out and referred to people as "brownshirts." And I got my wires crossed that day and thought, you know, if they're going to go down that road, I will too.

I probably shouldn't have, but I did.

The first lady, you wrote the following -- the headline was, "Is Obama shagging hookers behind the media's back?" And you write, "I assume not. I assume that Obama's Marxist harpy wife would go Lorena Bobbit on him should he even think about it."

Why would you describe Michelle Obama in those terms?

ERICKSON: Well, you know, back during the campaign trail in 2008, a lifetime ago, frankly, in blogging, I was very passionate, very aggressive in defending my side. And at the time that I wrote that, the Eliot Spitzer story was breaking, and the point was -- distracted by the language, obviously -- that Barack Obama was as much a creature of the media as Eliot Spitzer was. Neither have been investigated. And, you know, since that time, I've really learned, headed into, frankly, the David Souter comment, that I don't have to get personal in blogging to make my point. I've definitely evolved over time.

KURTZ: Well, let's deal with the David Souter comment. When Justice Souter announced his retirement, you said, you wrote, "The nation loses the only goat (EXPLETIVE) child molester ever to serve on the Supreme Court."

Do you regret writing that?

ERICKSON: Yes, absolutely. It was about the dumbest thing I've done.

You know, counterintuitively, I guess, some good came out of it. It was the very first time I realized, Howard, how what I do for a living affects my family as well. Having my 3-year-old heckled and booed in the front yard by a neighbor, having my wife be berated at her office, you know, being a blogger, up until that moment I always considered I was just a guy chatting with friends, even on Twitter. And I realized that I actually reached a point where people listen to what I say and care about what I say, and frankly it was a wake-up call to me that I had to grow up in how I write.

As utterly revealing as his little mea culpa was, I think this is actually more revealing -- and unintentionally hilarious:

KURTZ: Well, you know, at a time when there's this great debate about threats against Democratic -- mostly Democratic and some Republican lawmakers in the health care debate, I stumbled upon something you wrote about a Washington State controversy in which you said, "At what point do people march down to their state legislator's house, pull them aside and beat him to a bloody pulp for being an idiot?"

Now, I assume you were being metaphorical, but some people might react differently to that.

ERICKSON: You know, the left tried to blow that one up, and I've written subsequently about that with a legislator in New York who wants to ban salt in restaurants. And I think the point is valid. The left may not like it.

I'm a local legislator myself, and I am afraid and have been since that time that we're reaching a point where reasonable people are just going to get kind of crazy with government intrusion in their lives. The particular case in that situation was Washington State banning phosphates from dishwasher detergent.

There's nothing that will drive a good man or woman over the bend like banning phosphates from dishwasher detergent! Can you blame anyone for going down to their legislator's office and beating him to pulp when they are intruding on your life to such a degree that you can't buy phosphate-filled detergent? Where oh where will it end? When the jack-booted thugs can take away your phosphate detergent, you're just one small step away from the gulag.

Actually, now that I think about it, yes I have. Even more absurd is the fact that CNN has hired this fatuous fool, thinking that his point of view is even remotely indicative of anything other than a massive temper tantrum by a bunch of sore losermen who simply refuse to acknowledge that they are in the minority.