Women as terrorist weapons in Russia

Female suicide bombers, like those suspected in the Moscow attack, are stealthier and garner more media attention 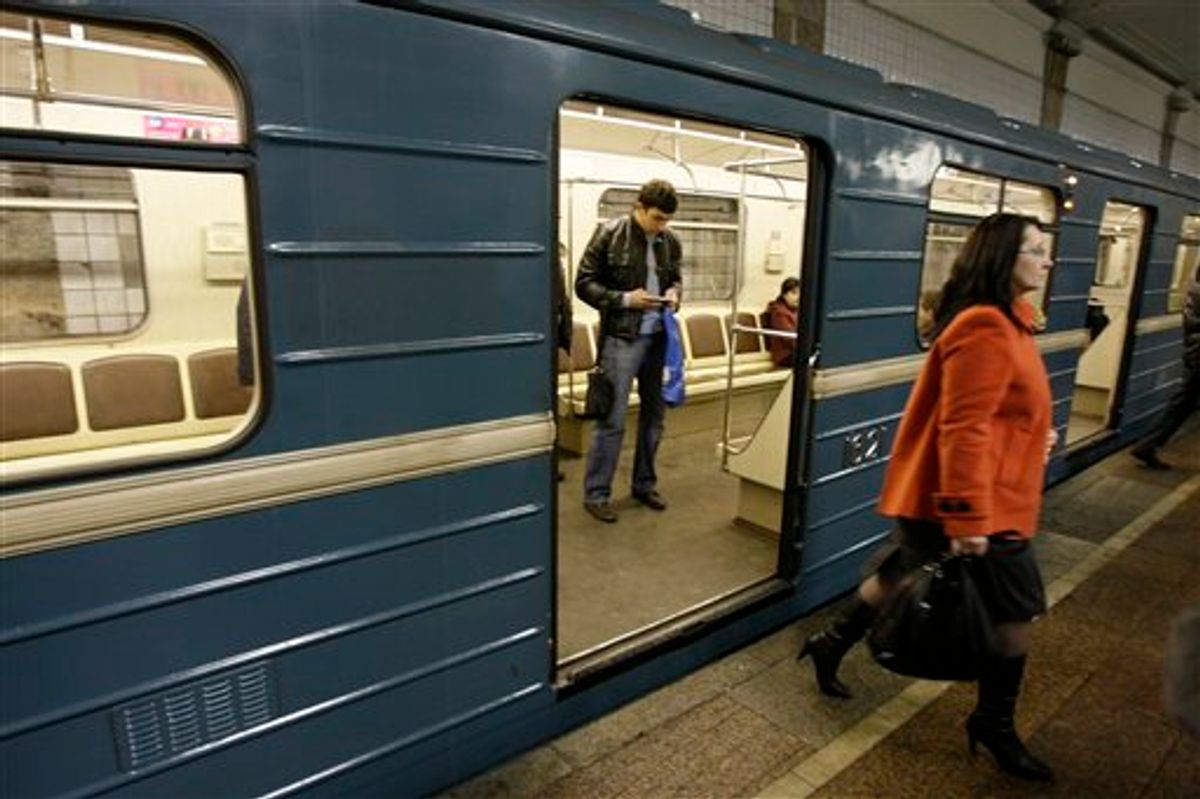 Few commuters, quite uncommon for Monday afternoon, in a subway train making stop at the Park Kultury subway station that was earlier hit by an explosion, in Moscow, Monday, March 29, 2010. Two female suicide bombers blew themselves up on Moscow's subway system as it was jam-packed with rush-hour passengers Monday, killing tens of people and wounding many more, officials said and blamed the carnage on terrorists from the restive Caucasus region that includes Chechnya. (AP Photo/Misha Japaridze) (AP)
--

The coverage of Monday morning's subway attacks in Moscow has been awash with devastating images of body bags and bloodied commuters. But even given these gruesome visuals, there is one particular detail about the attacks that stands out: The suspected attackers were women. In some cases, headlines have led with that fact over the actual death toll, and plenty of pieces, this post included, focus explicitly on the gender angle -- and that's a big part of why terrorists use female suicide bombers. They simply pack greater shock value and tend to get more news coverage.

The media is of course crucial in shaping the public perception -- both locally and globally -- of a terrorist attack, and the amount of attention an attack receives doesn't always depend on the degree of violence or the amount of damage done. As journalist Melanie Reid wrote several years ago in an article for the Herald (via the Strategic Studies Institute), "Women who kill or threaten to kill are hot news. It is a reaction that knows no state or religious boundaries." The emotional impact is profound: Women are supposed to be maternal and nonviolent; it's staggering to see society's caretakers turn to violent destruction. There is also the novelty aspect: Even though female terrorists have been steadily growing in number around the world -- including in Russia in recent years -- they still tend to be treated as an oddity.

All of these factors can lead to greater international media coverage, which makes the attack an even more effective recruitment tool for terrorists. There are other, more practical reasons for using women -- namely, they're less likely to be suspected, so it's easier for them to go undetected. In Iraq, we've seen the number of  female suicide bombers swell due in part to a resistance to having men search women at checkpoints. Essentially, they're stealth bombers.

The common assumption is that women have different motivations than men for turning to terrorism; some popular theories include mental illness, coercion and a desire to escape their second-class status. But as Lindsay O'Rourke wrote in an Op-Ed in the New York Times after spending several years researching cases of female terrorists, "the main motives and circumstances that drive female suicide attackers are quite similar to those that drive men." Which is to say: Revenge for slain loved ones or as a protest against a foreign military  occupation.

They might have a unique impact and tactical advantage, but female suicide bombers are not an unfamiliar foe.