Do we need a child abuse registry? 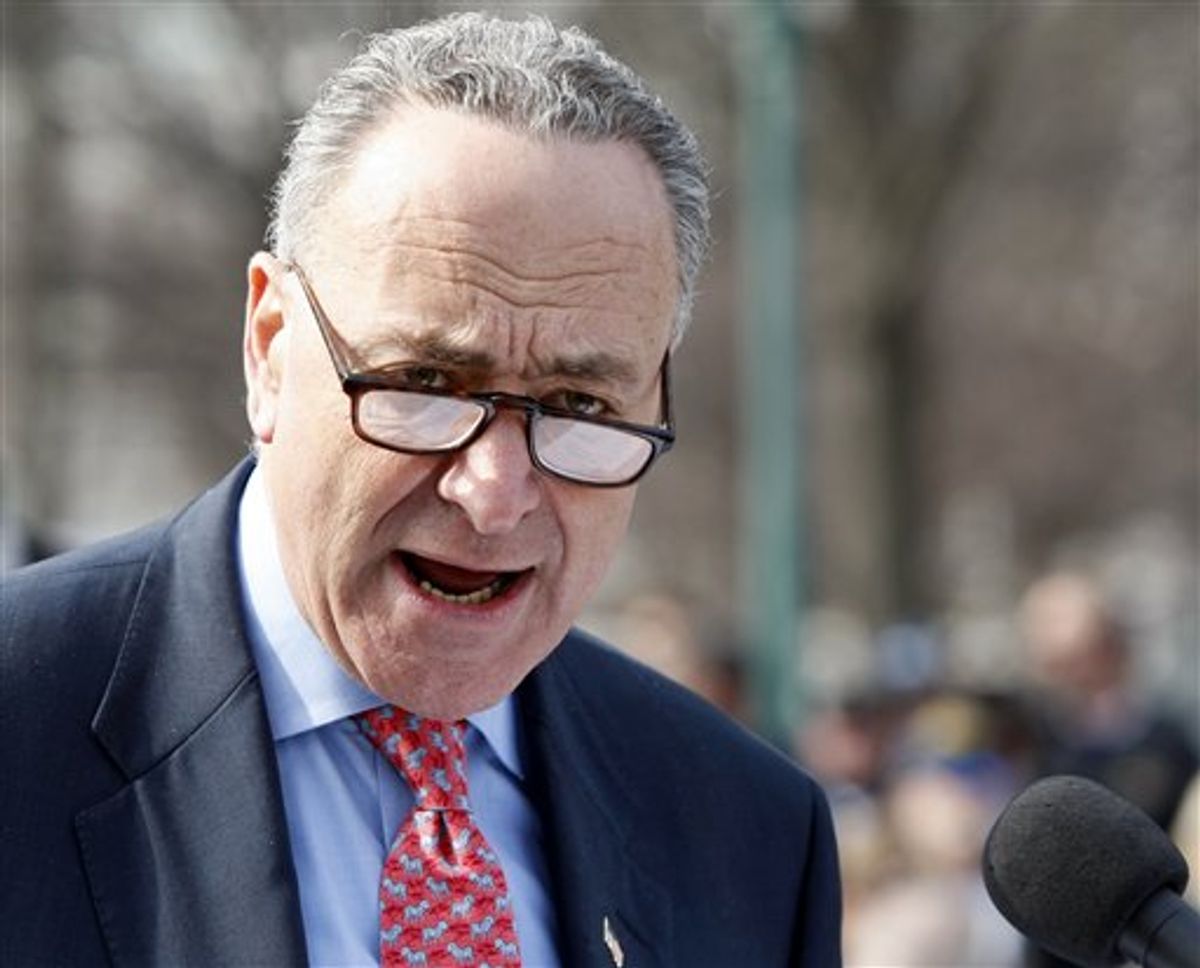 FILE - In this Feb. 24, 2010, file photo, Sen. Charles Schumer, D-N.Y., speaks at a rally on Capitol Hill in Washington. The largest voting machine company in the country bought its biggest competitor six months ago without advance fanfare. Now the Justice Department is investigating whether to unwind the merger that put a privately held Nebraska company in control of the voting machines in nearly 70 percent of the nation's precincts. Senate Rules Committee chairman Schumer has raised concerns about the purchase, in which Election Systems & Software Inc. of Omaha, Neb., bought the voting machine subsidiary of Diebold Inc. of North Canton, Ohio. (AP Photo/Luis M. Alvarez, File) (AP)
--

Senator Chuck Schumer, D-N.Y., is pushing for a national registry of child abusers. "Track child beaters like we do sex offenders," blares one headline. It sounds like a righteous idea, at first glance. But although it may look like a huge step, and is certainly being announced as such, ultimately it will only make it easier for people to find out what other people already know. And it's what we don't know, in cases of child abuse, that tends to do the most harm.

Registries for child abuse already exist, on the state level, though federal law doesn't mandate that states keep them. A key factor in the national registry -- which was authorized in 2006, but which has not yet been put into place (an extensive feasibility report was published in May 2009) -- is that it would centralize the information and allow child protective services easier access to it when abusers cross state lines.

Schumer compared the national registry for child abusers to registries for sex offenders. But that begins to make clear some of the potential shortfalls of the system: For one, tracking sex offenders is only one of the ways we work to prevent repeat crimes, and it doesn't always work. And, just as in the case of the sex offender registry, this system would only work to track abusers who have been reported -- which seems like a point so obvious it's not worth bringing up, until you think about how underreported child abuse actually is. A report by the National Center on Child Abuse Prevention Research, the "Child Maltreatment Fact Sheet 2006," gives a sense of it: In cases of fatalities caused by child abuse, only 16 percent of the families were known to child protective services.

A national child abuser registry sounds great, but it's just a drop in the bucket. In cases where child abuse is reported, and substantiated, and the child is removed from the abusive situation, it may help to prevent abusers from having further access to children. But people often avoid reporting abuse -- because they're scared of going to court, scared of tearing families apart, scared of putting a child in foster care (which can be a traumatic experience in its own right, even if necessary), scared of all the things that can happen when you identify someone as a violent criminal, or just scared because they are children and they don't know how to talk about it or to whom they should talk. Anything that can help to stop or prevent abuse typically is a good idea. But we also need to treat abusers, to teach parents to recognize and change their own potentially abusive behavior, and to teach children and the adults who work with them how to recognize abuse and respond to it. Without that, we might know where the abusers are, but we'll have no idea what to do once we've found them.