The unfunny business of Chelsea Handler

She's arguably the most successful woman in comedy. Why don't I feel good about that? 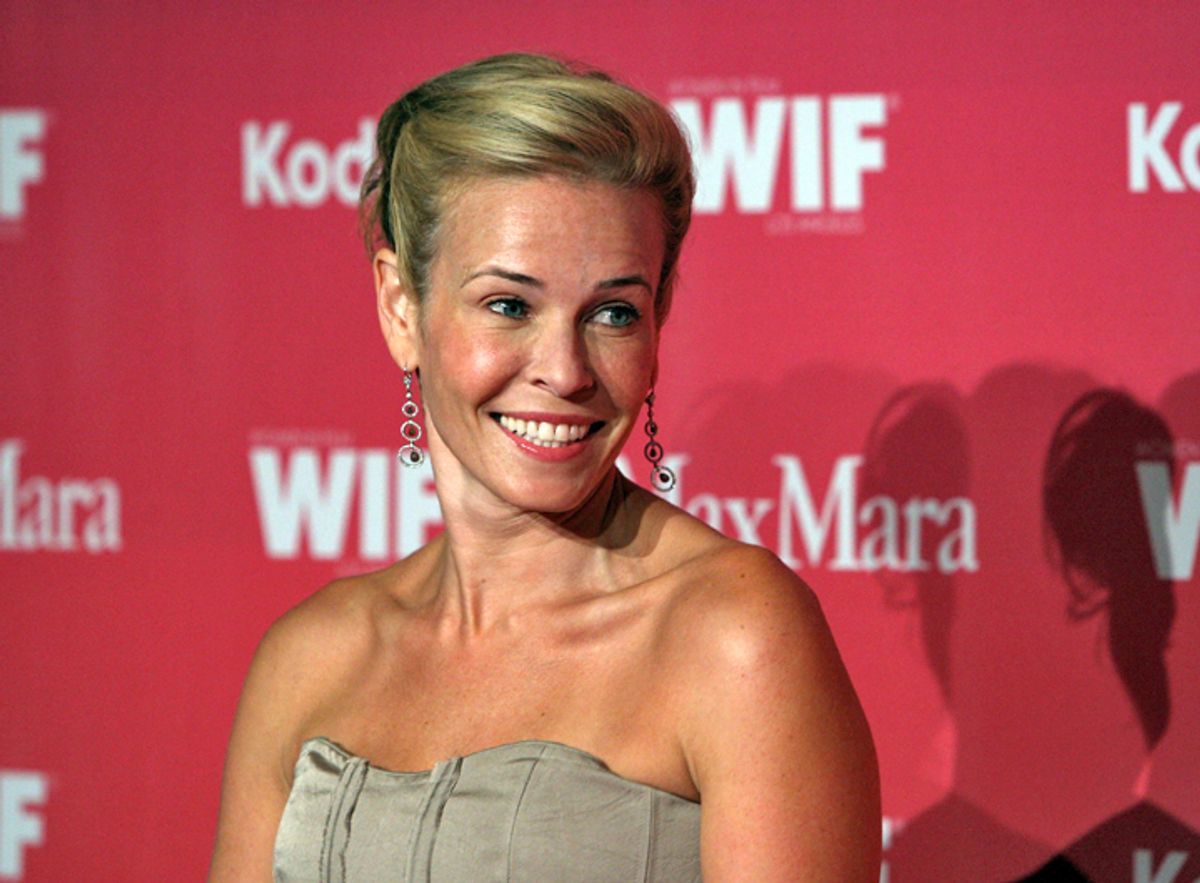 This week, Nicholas Sparks has two books on the New York Times bestseller list. Chelsea Handler has three. But that's not where the 35-year-old comic's world domination ends. Like David Letterman, Handler's got a hit late-night talk show, and, like Lady Gaga, she's gearing up for a massive multi-city tour. And in comedy, a field as rife with sexism as it is with fart jokes, she's proven that women can rise through the ranks. Why, then, is it so hard to feel good about her?

Of course, plenty of people feel just fine about the Garden State native. Her ribald tales of drunken escapades, wacky family and shame-free shags have won her a devoted legion of both male and female acolytes, drawn to her frank, bawdy style. As she laps up glowing reviews for her "hilarious" memoirs -- like the recently released "Chelsea Chelsea Bang Bang" -- she fills a niche no other female entertainer seems able to occupy. Handler's not a good girl, like Tina Fey. She's not a self-deprecating D-lister like Kathy Griffin. She's not a weirdo like Sarah Silverman. In many regards she's a dream come true -- the girl who puts out, and then laughs about it.

I speak on behalf of slutty, Belvedere-imbibing women from New Jersey when I say: I want to like Handler. But every time I hear how outraaageous she is, I wonder what I'm missing. This is a woman who delicately refers to the female anatomy as a "Pikachu" and defecation as "shadoobie," so excuse me if I'm not seeing the transgressiveness. On her talk show, "Chelsea Lately," she never seems like a loose cannon, ready to do something crazy at any moment. Instead, she's as stiff and rote as any other late-night host. She just gets bleeped more often. It also doesn't help her badass rep that she spent four years dating Ted Harbert, who, in addition to being filthy rich and 20 years her senior, is also the president and CEO of Comcast -- which owns "Chelsea Lately." The heart wants what it wants and all that, but therein lies the paradox that is Chelsea Handler: She's built a career on being the crazy chick with a taste for vodka and hookups, but what could be more conventional than a pretty girl dating the boss?

No one would blame a lady for being good-looking, or using that to her career advantage. I don't care that she dares to appear bikini-clad on the covers of Shape and Playboy. So what if those are comedy dues that Louis CK, Zach Galifianakis, Artie Lange and Patton Oswald didn't exactly pay? The problem with Handler is that she rests far too heavily on her supposed naughtiness. And like the wild friend who brags so much she makes a threesome sound tedious, Handler's bad-girl-in-a-bikini persona can feel calculated to the point of mechanical. It doesn't help when the bad girl herself took swift umbrage after Jay Mohr claimed he saw her drunk.

Handler could be forgiven, however, for not being the shambling, sex-crazy wreck she purports to be: We've got Courtney Love and Lindsay Lohan to pick up that slack. Her real crime is that for someone in the comedy business, her act just isn't that funny -- full of bits about "tooting" and, surprise, being wasted.  And as lame as she is with her written material, she's a deer in the headlights trying to be funny off the cuff. Most unforgivably of all, her tweets are really boring.

The sad truth is that, outside of her "I love to drink! Look at my ass!" comfort zone, Handler has remarkably little to say. But, hey, if college taught us anything, it's that a girl can go far on "I love to drink! Look at my ass!" Like, say, the New York Times bestseller list. Hey, Chelsea Handler is pretty and she seems nice enough and, wow, she's daring enough to opine that Jon Gosselin is "disgusting." She'll be around forever and bury us all. In that sense, I suppose, Handler is a groundbreaker. Like Dane Cook or Jeff Dunham of any number of high-profile, low-wit stars, she's proven that a woman in comedy can be just as lame as any man.