The search for an intellectual GOP presidential candidate

The tea party crowd boasts many would-be stars. But many thinking conservatives begin to worry: Who will lead them? 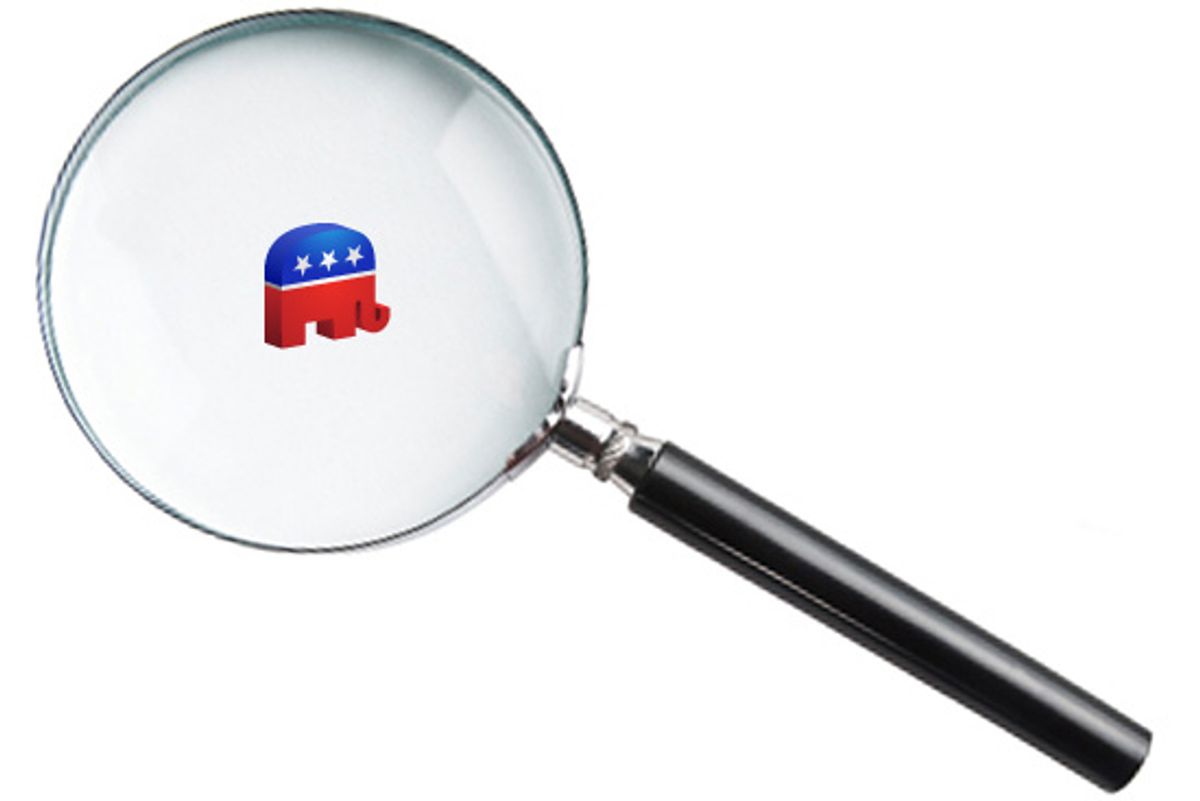 With so much attention being lavished on Sarah Palin, the tea party movement, and media blowhards like Rush Limbaugh and Glenn Beck, Republican intellectuals can seem like an endangered species.

In fact, an intellectual wing of the GOP does still exist, but it faces a major quandary. As the field for the 2012 presidential nomination begins to take shape, it is increasingly obvious that none of the five most talked-about contenders -- Palin, Mitt Romney, Mike Huckabee, Newt Gingrich and Tim Pawlenty -- possesses genuine cerebral appeal.

Romney's flip-flops on social issues like abortion and gay rights raise concerns about what, if anything, he really believes. Huckabee doesn't believe in evolution. Gingrich used to be a history professor but now panders to the base by labeling President Obama a socialist. Pawlenty can't seem to decide whether he's a centrist or a tea party clone. And Palin is, well, Palin.

"There is a void right now, and no one has really captivated the intellectuals," said Richard Brookhiser, the author and National Review senior editor who was a close associate of the late William F. Buckley.

David Frum, once a speechwriter for President George W. Bush, sealed his status as the preeminent media spokesperson for the discontented intellectuals last week. After penning a widely read blog post that lamented the excessive influence of "the most radical voices in the party and the movement," Frum was forced out of his post at the American Enterprise Institute.

Speaking to Salon before the furor reached its denouement, Frum emphasized that he was concerned about an ongoing, large-scale desertion of the Republican Party by "better-educated people." The nomination of someone like Palin would be a serious problem for a party already seen as "not valuing expertise," he added.

One person mentioned by both Frum and Brookhiser as a possible "candidate of the intellectuals" is Indiana Gov. Mitch Daniels.

Daniels transformed the Hoosier State's fortunes to the tune of almost $1 billion upon taking office in 2005: A deficit of $600 million became a surplus of $370 million. His reputation for fiscal conservatism is long-standing. As budget director for President George W. Bush, Daniels displayed a samurai sword in his office in a wry acknowledgment of his willingness to cut just about anything. Bush nicknamed Daniels "Blade."

Daniels doesn't identify closely with hard-line social conservatives, but there's little in his record to discomfit them, either. A speech he gave last year at a Butler University commencement ceremony made clear his distaste for the dominant social mores of his generation.

"As a group we have been self-centered, self-absorbed, self-indulgent and all too often just plain selfish," he told the crowd. "Our current baby boomer president has written two eloquent, erudite books -- both about himself."

But questions remain about whether Daniels really lives up to his billing as the thinking Republican's candidate.

In the Bush White House, he presided over the transition from Clinton-era surpluses to large deficits, belying his Scrooge-like image. He predicted in January 2003 that the federal budget was unlikely to return to surplus in the next decade, adding: "We ought not to hyperventilate about this."

Daniels also significantly low-balled the cost of the Iraq war. When White House advisor Lawrence Lindsey suggested in September 2002 that the war could cost up to $200 billion, Daniels derided the estimate as "very, very high." His own estimate for the conflict was $50 billion to $60 billion. The price tag is now about $700 billion.

Other problems are cosmetic, but not unimportant. Daniels, a small, balding man, just doesn't look presidential. And his tongue can be acidic, sometimes to his own detriment.

He caused outrage shortly after 9/11 by accusing New York politicians seeking federal aid of becoming involved in "a little money-grubbing game," and a later show of public contrition was undercut when Daniels lost his cool with reporters. "Is English O.K. or would Spanish be more plain?" he asked in the face of pointed questions.

Ramesh Ponnuru, a senior editor at the National Review, said the Indiana governor would "need some of the others to weaken," if his candidacy were to become viable.

This may be why others claim John Thune might fill the intellectual void. The junior senator from South Dakota came to prominence in 2004 when he knocked off Tom Daschle, who was then minority leader.

David Frum said that Thune "fits a lot of the bill" for thinking conservatives. He "certainly has the character [to attract support], and he has the capacity to be a very policy-oriented candidate," Frum added.

Thune is erudite, handsome and affable enough to elicit tributes even from ideological opponents. All these traits soften the edges of a trenchantly conservative record. He emphasized his opposition to gay marriage during his battle with Daschle, and is fiercely pro-life and pro-gun.

David Brooks devoted a New York Times column last November to praising the South Dakotan, whom he said "sometimes seems to have emerged straight into the 21st century from a more wholesome time."

Thune has shown a willingness to mix things up with the party hierarchy. In his first year in the Senate, his state's second-biggest employer, Ellsworth Air Force Base, was in peril of being closed. Thune responded by becoming conspicuously lukewarm about Bush's judicial nominees and his controversial choice as ambassador to the United Nations, John Bolton. Sending a thinly veiled message to the White House, he told a home-state newspaper, the Rapid City Journal: "What goes around, comes around." The base was duly saved.

It is unclear, however, whether Thune's geographical roots are an asset or a hindrance. Hailing from South Dakota burnishes his outsider credentials. And Ramesh Ponnuru asserted that the region is rich in political potential for Republicans.

"There is a sweep of six states from Montana to Michigan, and together they have only one Republican senator," he said. "That is not a true reflection of public sentiment in those states."

But South Dakota also places Thune a long way from any center of political or fundraising power. Conservative writer and historian George Nash noted that Thune and Mitch Daniels have one problem in common: "They are not well-known beyond the cognoscenti who follow these things for a living."

The credit card industry is a major employer in South Dakota, and Thune has defended its interests with vigor. In May 2009, he was one of only five senators to vote against a bill that sought to tighten restrictions on card issuers, obliging them to spell out their terms in plain English.

Thune might argue that the vote was a matter of looking after his constituents -- the other senator from South Dakota, Tim Johnson, was the only Democrat to vote against the bill. But his position suggests a willingness to place local priorities over the national interest -- precisely the tendency the GOP has inveighed against of late, most prominently in the case of Democratic Sen. Ben Nelson and the "Cornhusker kickback."

Beyond Daniels and (maybe) Thune, the pickings seem slim for right-leaning intellectuals.

David Frum, for instance, declared himself "a big admirer" of former Utah Gov. Jon Huntsman, a noted moderate, but questioned whether Huntsman, currently serving as U.S. ambassador to China, would be "available" for a 2012 run.

Ramesh Ponnuru threw the name of Mississippi Gov. Haley Barbour into the pot -- but plucked it out again just as fast.

"A lot of conservatives think very highly of Gov. Barbour -- as a conservative, as a competent executive and as a canny political operator," he said. "There is some skepticism, however, about how a Mississippi governor who used to be a lobbyist for the tobacco industry would fare in a nationwide election."

George Nash outlined a scenario -- one in which some kind of foreign crisis became central to American political debate -- in which Gen. David Petraeus could be a formidable candidate. "But I don't know if he'd even be interested," he added.

(Petraeus sparked speculation by giving a speech in New Hampshire last week, only to squelch it by declaring: "I will not ever run for political office.")

The string of names is evidence of how keenly a new figurehead is being sought by the segment of the GOP that fails to share the grass roots' ardor for a Palin or a Huckabee.

"There seems to be a grasping for some fresh face, someone who does not look like yesterday's man or woman," Nash said.

But it is an open question whether that longing can be fulfilled. The cerebral right may no longer have enough power to propel its preferred candidate to the head of a party in which anti-intellectualism and "heartland values" have become animating forces.

In the wake of his departure from AEI last week, David Frum told Politico: "The elite isn't leading anymore. It's trapped."