How did the "Sweet Hereafter" director end up making a movie where Julianne Moore and Amanda Seyfried get it on? 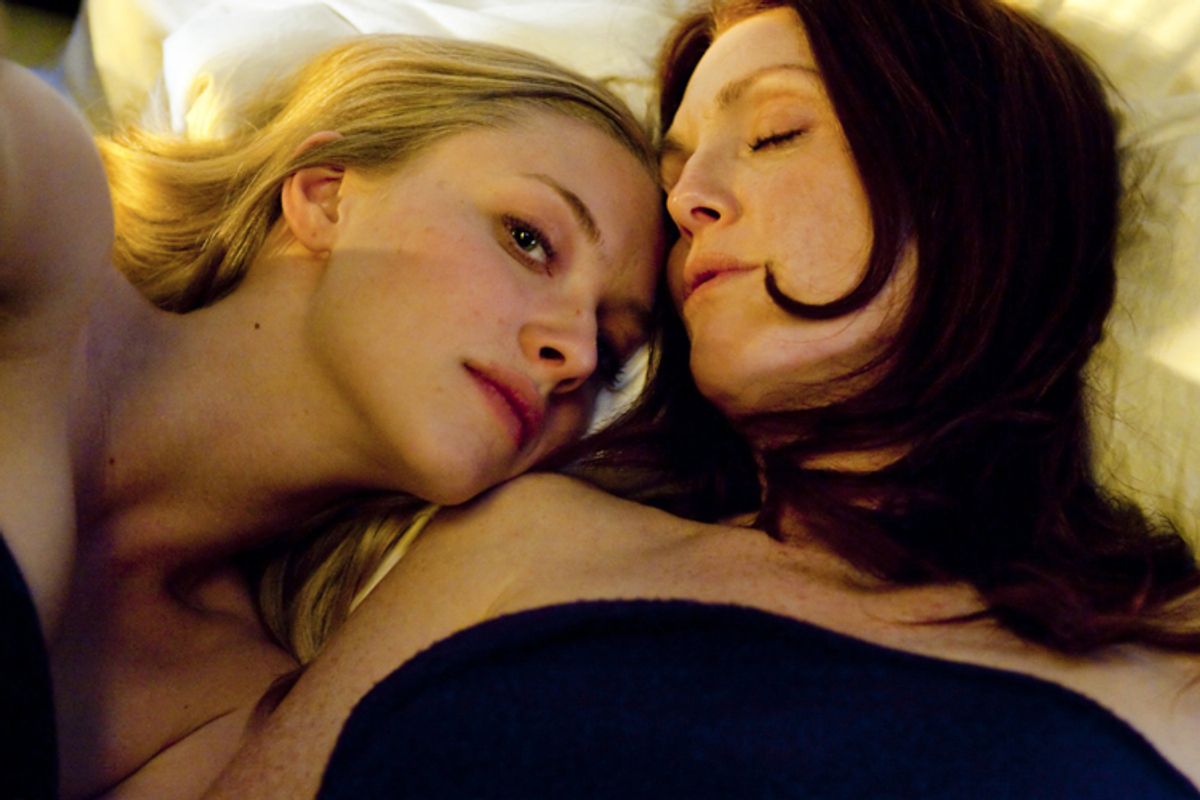 Atom Egoyan, the Canadian film director known for works of piercing emotional incision like "The Sweet Hereafter," is quick to cite his new movie "Chloe," which just opened in major markets, as the first film he's directed that he did not also write.

But that's not entirely accurate. Egoyan says that his favorite film, from among the dozens he's directed over the past several decades, is a version he made of "Krapp's Last Tape," by the occasionally inscrutable playwright Samuel Beckett, about a man's compulsive desire to document his life, to the point where the living, the recording and the remembering become one and the same.

It was Egoyan's love of Beckett that brought him a key member of his cast for "Chloe." Liam Neeson would likely not have taken what amounts to a classic "wife" role -- i.e., a supporting part -- had he not worked with Egoyan at Lincoln Center two summers ago on a somewhat obscure television screenplay by Beckett called "Eh, Joe."

Beckett is not the only writer other than himself around whom Egoyan has wrapped his keen directorial sense. His earliest work included made-for-TV tales of suspense and the supernatural that were shown as part of "Alfred Hitchcock Presents" and "The Twilight Zone."

It's not a reach to say that "Chloe" owes more to the latter than the former. Julianne Moore -- who stars in the film along with Neeson and Amanda Seyfried, who exudes such a glowing otherworldly beauty she could almost be a "Twilight Zone" alien -- says, "If you try to one-line this movie, it's about a woman who hires a prostitute to follow her husband to find out if he's cheating. And you're just like, 'Oh yeah, that happens all the time.'"

If that sounds like a thriller of the more breathless variety, that's not the half of it. During the course of their scheming, the stunning hired help Chloe (Seyfried) falls into an obsessive love with the lonely wife Catherine (Moore), culminating at one point in a fairly graphic sex scene. Many viewers will be hard-pressed not to see it as the movie's focal point. Egoyan said it's probably his favorite scene in "Chloe."

To backtrack, well-heeled Toronto gynecologist Catherine suspects her music professor husband David (Neeson) of cheating after he misses a flight home, and thus the surprise party she's planned for his birthday. After a chance meeting in the ladies' room of a posh restaurant, she hires call girl Chloe to try and seduce him, both to see how easily he'll wander and also to relearn what ignites his passions. But it's Catherine who ends up being seduced by Chloe's recountings of her trysts with David, and ultimately by Chloe herself.

The task then for this A-list artistic team was to take a somewhat overheated plot, housed in a screenplay by Erin Cressida Wilson, who also wrote the sadomasochistic comedy "Secretary," and give it the nuanced emotional honesty for which Egoyan is known.

Even for the level of talent assembled for "Chloe," it wasn't easy. After the film premiered at the Toronto Film Festival last September, some reviews dubbed the movie an art-house "Basic Instinct."

"Chloe" is loosely based on French director Anne Fontaine's "Nathalie," which got very limited distribution in the U.S. That film stars Fanny Ardant as the suspicious, wounded wife, Emmanuelle Béart as the prostitute and seductress, and Gerard Depardieu as the husband. "Chloe's" producer, Ivan Reitman, optioned the story and hired Cressida Wilson to write the screenplay for the U.S. version, which used the French film mainly as a jumping-off point. "Chloe," as Egoyan puts it, is "not so much a remake as a complete reinvention."

A few key changes make the French film much more subtle -- likely too subtle to have had much traction in the U.S., even by foreign-movie standards.

Unlike Neeson's David in the American film, Depardieu's character admits that he has strayed right off the bat. This fundamentally changes the bargain Ardant's character makes with the prostitute. Instead of wondering if he'll cheat, it's immediately more a question of what he likes, and wanting to rediscover how to love him.

Although Moore's Catherine arrives at a similar place, she at first seems more like she's trying to catch him in the act -- she is spy and trapper, rather than sly researcher. Furthermore, in "Nathalie" the sex between the women is implied, never shown, with the attraction more on the side of the wife. There is also no potboiler element to the plot, as there is at the end of "Chloe."

"I saw the original picture 'Nathalie' when it came out, and I liked it," says Egoyan. "It would never have occurred to me to remake it. That was Ivan's idea, and he had the taste -- really, the intelligence -- to hire Erin to write it." The director adds, "I think he also made it clear that he was thinking of directing it himself and decided that he wasn't the right person."

That set the stage for what Egoyan realizes is his most potentially commercial film to date, with a linear narrative and the biggest stars he's ever worked with.

"It was complex, it had amazing roles for these actors, and this material was close enough to me that I felt I could really embrace it. I mean, I read a lot of screenplays where I would go see the movie, but I couldn't imagine spending a year and a half of my life making it and then talking about it," he says. "This one just really seized me.

"I shot it in a more classic style than I would shoot one of my own films," Egoyan continues. "It's very focused on the close-up, and trying to concentrate on the performances, and it's not so involved in a more rigorous and formal approach to the filmmaking, which is what characterizes my own work."

The movies Egoyan writes for himself, likely could never attract the big-name stars attached to this project, because they develop more organically during the process of shooting and thus require longer schedules. "My own scripts are not classic narratives," he says. "They're unpredictable, they are nonlinear. They only really coalesce at the last moment as the film finds its form."

His cast seemed aware that the movie was something of a leap from Egoyan's other films. Says Amanda Seyfried, "He has such passion for everything that he does, even when he doesn't write it. And I think this was daring for him."

Despite its more typical Hollywood leanings, "Chloe" is far from a cookie-cutter sexy thriller, which is largely what drew this group of luminaries to the project. For one thing, it's a rare mainstream movie that seriously examines the real-life difficulties of marriage.

That aspect of the film was a big draw for Moore, who was struck by how unusual it was to see a relationship at that stage depicted on screen. "So many movies are about getting married, like, 'oh, I met this guy, is he going to ask me to marry him, oh he did, we got married, the end!'" she says. "In life marriage is long and complicated and it's not just the beginning -- after a while you barely remember the beginning."

People have expressed surprise to Egoyan that Ivan Reitman, the director and/or producer of Hollywood hits like "Ghostbusters" and "Beethoven," was the instigator behind "Chloe." But Egoyan has an answer in the form of "Dave," the 1993 romantic comedy Reitman directed about the presidential marriage, starring Kevin Kline and Sigourney Weaver. "It's very insightful about marriage as well," says Egoyan.

All the key players in "Chloe" were drawn to the film's exploration of what Cressida Wilson describes as a "calcified marriage." All of them are in long-term relationships: Ivan Reitman has been married for 30 years and Egoyan for 26. Cressida Wilson has been with her partner for 11 years, Moore has been married to director Bart Freundlich since 2003, and Liam Neeson had been married to Natasha Richardson for nearly 15 years when she died in March 2009, during the time he was shooting "Chloe."

"We all knew a long-term relationship, and it all rang very, very true to all of us," says Cressida Wilson.

In practice the damaged marriage in the film, although richly drawn by Neeson and Moore in just a few scenes, mainly serves as a backdrop for the unlikely icebreaker -- Chloe -- who also defies convention to a certain degree. After all how often, on screen or in real life, does a younger woman end up renewing an older one's sense of her own desirability?

While it's tempting to see Chloe as a villain -- hence the "Basic Instinct" and "Fatal Attraction" comparisons -- she is also the self-sacrificing hero, in the sense that she changes Catherine, the film's true protagonist, for the better. "I really related to the Chloe character for the first few drafts and felt a great empathy for her, and so I didn't write her as a villain, at all," says Cressida Wilson. "In fact I almost went too far in not writing her as a villain, but more as a broken, seductive, manipulative, but needy and empty girl who needed a family and needed love.

In addition to turning on its head the stock B-movie character of the evil seductress, the movie also plays role reversal with what Egoyan calls a classic dramatic scenario, one that appears in Shakespearean comedies and Mozart's opera "Così fan tutte": testing the fidelity of a spouse.

He also mentions a chapter of Cervantes' "Don Quixote" titled "A Tale of Impertinent Curiosity." Egoyan says, "It's a set-up of two men, bragging to each other about the fidelity of their wives, and one sort of saying to the other, 'Well, I can actually win your wife over,' and making a bet. It's usually men who do this in literature. It's kind of a male exercise of control and power to be able to seduce someone else's wife. So this is a very unusual take on that."

It's hard to say whether "Chloe" will ultimately be judged as something that sits uncomfortably between the loftier passions of its talent and its racy plot, or whether it's in fact a perfect bridge between those worlds, the nuanced art film that is also a sexy thriller.

"Maybe that's naive of me, but I thought of it as a great piece of drama," Egoyan says. "There's no question that it slips over into a thriller at one point. But I wasn't consciously thinking of any other films. As a matter of fact, I was trying to resist that aspect of it. Maybe that's one way of looking at it, but it wasn't what my approach was."