"Reporting" on Iran should seem familiar 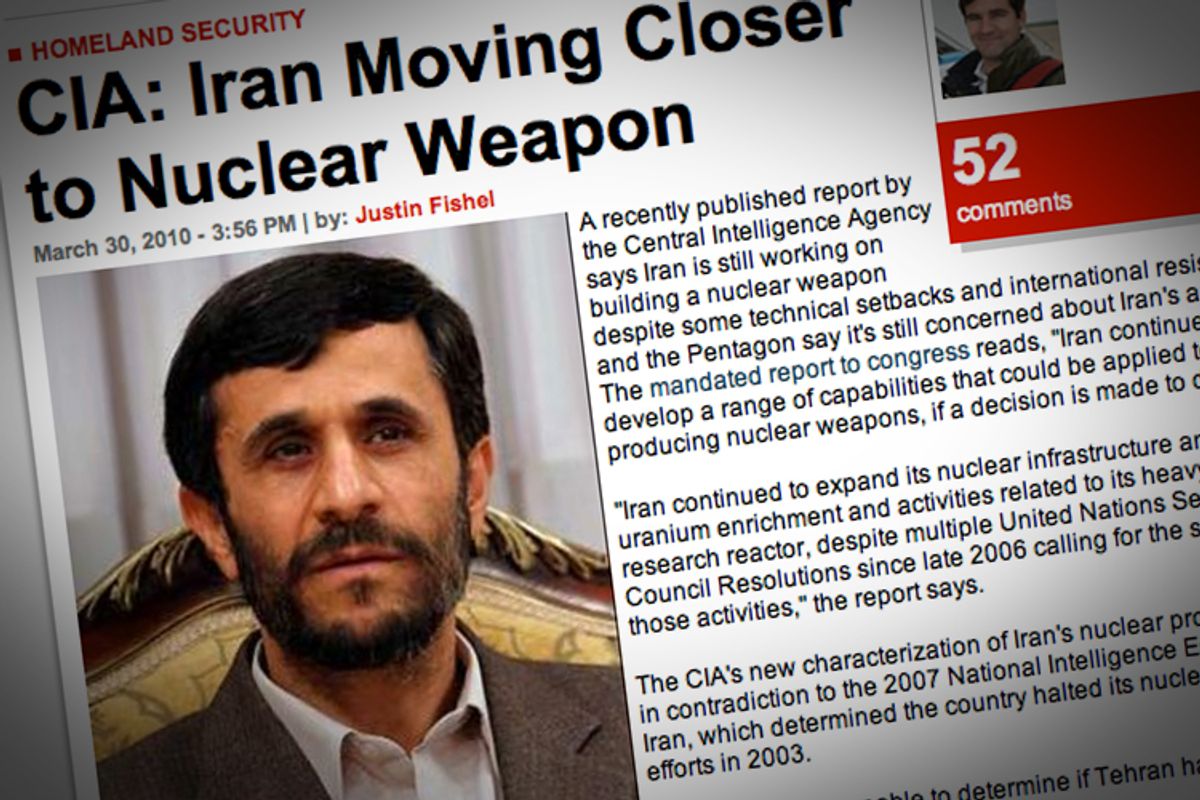 Fox News currently has an article at the top of its website that is headlined:  "CIA: Iran Moving Closer to Nuclear Weapon."  The report, by DOD and State Department correspondent Justin Fishel, begins with this alarming claim:

A recently published report by the Central Intelligence Agency says Iran is still working on building a nuclear weapon despite some technical setbacks and international resistance -- and the Pentagon say it's still concerned about Iran's ambitions.

But, as blogger George Maschke notes, that statement is categorically false.  The actual report, to which the Fox article links and which the DNI was required by Congress to submit, says no such thing.  Rather, this is its core finding:

The report says the opposite of Fox's statement that "Iran is still working on building a nuclear weapon."  And, of course, the 2007 National Intelligence Estimate which concluded that Iran ceased development of its weapons program has never been rescinded, and even the most hawkish anonymous leaks from inside the intelligence community, when bashing the 2007 NIE, merely claim that analysts "now believe that Iran may well have resumed 'research' on nuclear weapons -- theoretical work on how to design and construct a bomb -- but that Tehran is not engaged in 'development' -- actually trying to build a weapon."

[E]evidence has mounted raising doubts about whether Tehran is telling the truth when it says its nuclear program is only to produce peaceful atomic energy.

Particularly damning was a report in February from the U.N. nuclear watchdog, the International Atomic Energy Agency, that said Iran may be working to develop a nuclear-armed missile.

But as Juan Cole correctly notes:

This Reuters article also misinterprets the stance of the International Atomic Energy Agency of the UN, which continues to certify that none of Iran's nuclear material, being enriched for civilian purposes, has been diverted to military uses.  The IAEA has all along said it cannot give 100% assurance that Iran has no weapons program, because it is not being given complete access. But nagging doubt is not the same as an affirmation. We should learn a lesson from the Iraq debacle.

Meanwhile, The New York Times' David Sanger -- who is the Judy Miller of Iran when it comes to hyping the "threat" based overwhelmingly, often exclusively, on anonymous sources -- continues his drum beat this week.  In an article co-written with William Broad, Sanger warns -- "based on interviews with officials of several governments and international agencies" ("all" of whom "insisted on anonymity") -- that "international inspectors and Western intelligence agencies say they suspect that Tehran is preparing to build more sites in defiance of United Nations demands."  But rather than the secret, nefarious scheme which the NYT depicts this as being, these plans for additional sites were publicly announced -- by the Iranian government itself -- many weeks ago.

As I've noted before, it wouldn't surprise me in the least if Iran wanted a nuclear weapons capability.  If anything, it would be irrational for them not to want one.  What else would a rational Iranian leader conclude as they look at the U.S. military's having destructively invaded and continuing to occupy two of its neighboring, non-nuclear countries (i.e., being surrounded by an invading American army on both its Eastern and Western borders)?  Add to that the fact that barely a day goes by without Western media outlets and various Western elites threatening them with a bombing attack by the U.S. or the Israel (which itself has a huge stockpile of nuclear weapons and categorically refuses any inspections or other monitoring).  If our goal were to create a world where Iran was incentivized to obtain nuclear weapons, we couldn't do a better job than we're doing now.

But regardless of one's views on that question, or on the question of what the U.S. should do (if anything) about Iranian proliferation, the first order of business ought to be ensuring that the reporting on which we base our views is accurate.  A CNN poll from February found that 59% of Americans favor military action against Iran if negotiations over their nuclear program fail (see questions 31-32) -- and that's without the White House even advocating such a step.  As the invasion of Iraq demonstrated, the kind of fear-mongering, reckless, and outright false "reporting" we're seeing already -- and have been seeing for awhile -- over Iran's nuclear program poses a far greater danger to the U.S. than anything Iran could do.

UPDATE:  The always-smart Steve  Hynd adds some important additional thoughts to all of this.

UPDATE II:  I was on Joe Scarborough's radio program this morning discussing Iran and these reporting issues.  Those interested can listen to it here; my segment begins at 36:15.