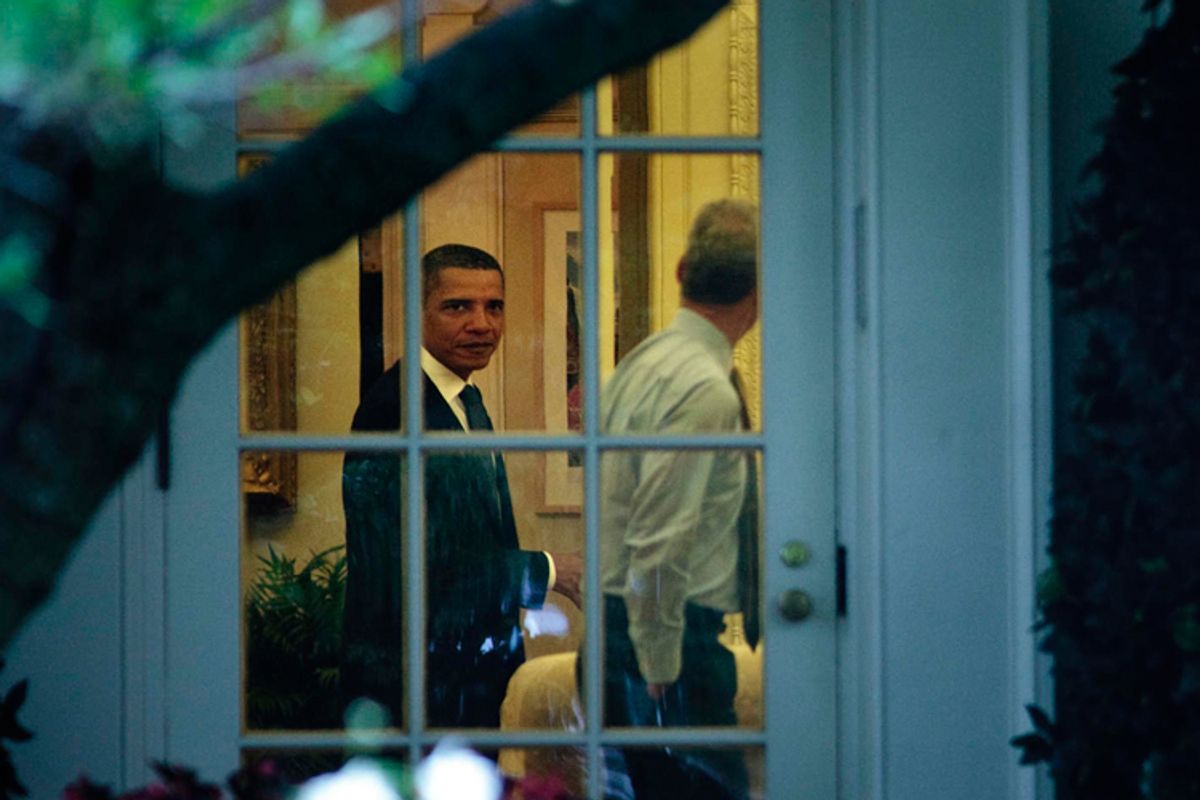 The Washington Post's Howard Kurtz reports that "the White House has practically been overrun by journalists pumping top officials for behind-the-scenes details for a growing roster of behind-the-scenes books."  He lists numerous Beltway reporters who are working on such books (The New Yorker's Ryan Lizza, NBC's Chuck Todd, Newsweek's Jonathan Alter, MSNBC's Richard Wolffe, The Washington Post's Bob Woodward), all of whom desperately need access to top White House officials and viciously compete with one another for it, because:

For the most part, the works in progress are not dispassionate policy analyses. What makes political books sell -- the backstage struggles, the fiery memos, the angry retorts in meetings -- can be gleaned only from the likes of Rahm Emanuel, David Axelrod, Robert Gibbs and, perhaps, Obama and Vice President Biden.

In other words, these are books about royal court intrigue and gossip, which cannot be written unless top White House officials cooperate with them by dishing to them their little secrets.  And why are these hordes of DC White House reporters so eager to be chosen by the White House to carry out this task?  Because:  "Time's Mark Halperin and New York magazine's John Heilemann, whose campaign chronicle 'Game Change' became a huge bestseller, have just signed a deal with Penguin Press to chronicle the 2012 contest -- for an advance reported to be about $5 million."

Inside-DC gossip sells, even (rather:  especially) when it's as tawdry and anonymous as the sleazy Halperin-Heilemann book.  So whichever of these political reporters wins the intense competition to curry favor with top government officials will be richly rewarded.  Even Kurtz recognizes the extreme conflict that poses to their "journalism":

Such contracts have caused high-level grumbling about reporters cashing in on their connections. . . .When it comes to pursuing sources, the authors who work for major news organizations have a key advantage. They are in regular touch with Obama aides for their day jobs and can obtain tidbits by agreeing to embargo them until their books come out. But they also face a delicate balancing act, since tough stories might alienate potential sources and flattering ones might loosen tongues.

That's an understatement.   Those oozing conflicts lead to things like this -- a glowing New Yorker profile of Rahm Emanuel so sycophantic it made the skin crawl -- followed up by an even more one-sided love letter to Larry Summers, both from the eager, wanna-be White House stenographer/author Ryan Lizza.  It's what causes Newsweek's Jonathan Alter to proclaim one day (when Obama favored it) that real health care reform "depends on whether Obama gets approval for a 'public option'," only to turn around less than two months later (once Obama said it was unnecessary) and proclaim that the Left is foolishly obsessing on the un-important public option.  Eagerness to serve the White House:  it's also what leads the desperate-for-book-access Alter to publicly insist that criticisms of Commander-in-Chief Obama help The Terrorists.  And it's what leads Chuck Todd on a daily basis, in the form of "covering the White House" for NBC, to serve as an amplifying vessel and justifier for whatever the White House happens to be saying at any given moment, from Todd's arguments against investigations of Bush officials to his disparaging of the public option.

The conflicts in having "journalists" report on the administration while simultaneously begging top White House officials for highly lucrative book-access are as self-evident as they are corrupting.  Richard Wolffe covered the Obama campaign for Newsweek at the same time he was writing an access-dependent book on Obama; when he left Newsweek, even Newsweek staffers complained about the prospect that he had used magazine funds to cover the campaign while withholding key stories from the magazine so he could use it in his book instead (the same controversy that has plagued Bob Woodward in the writing of his Bush-glorifying books while also working for the Post).  And that's to say nothing about Wolffe's overwhelming incentive to write favorable fluff pieces about Obama for Newsweek so that his desperately needed book access would continue to be granted.  Once he left Newsweek, Wolffe not only cashed in on his access with his glowing hagiography about Obama, but also by joining a "corporate communications" firm (run by former Bush aide Dan Bartlett) where his White House access undoubtedly was highly valued.  The success of his Obama-revering book has now enabled Wolffe to leave his communications job in order to write a second "behind-the-scenes", access-dependent book about Obama.

Is it even remotely conceivable that this stable of access-desperate reporters would write negatively about the White House or the President, or conversely, refuse to do their bidding?  Look at what Ryan Lizza writes to get the answer.  They're all vying for the lucrative position of unofficial royal court spokesman (which Bob Woodward occupied in the prior administration).  How can one possibly purport to be a "watchdog" over the very political officials on whom one's livelihood and hope for riches depend?  This conflict between (a) a need for access and (b) adversarial journalism is already acute enough -- perhaps even  unavoidable -- for those who report on a day-to-day basis on the White House and other officials.  But to then purposely compound that conflict by putting yourself in such a dependent and needy position vis-a-vis White House aides (with these "behind-the-scenes" books) proves how inappropriate the word "journalist" is for them.  They're motivated by many things; journalism plainly isn't one of them.