So far, "undecided" is easily winning the battle between Lee Fisher and Jennifer Brunner 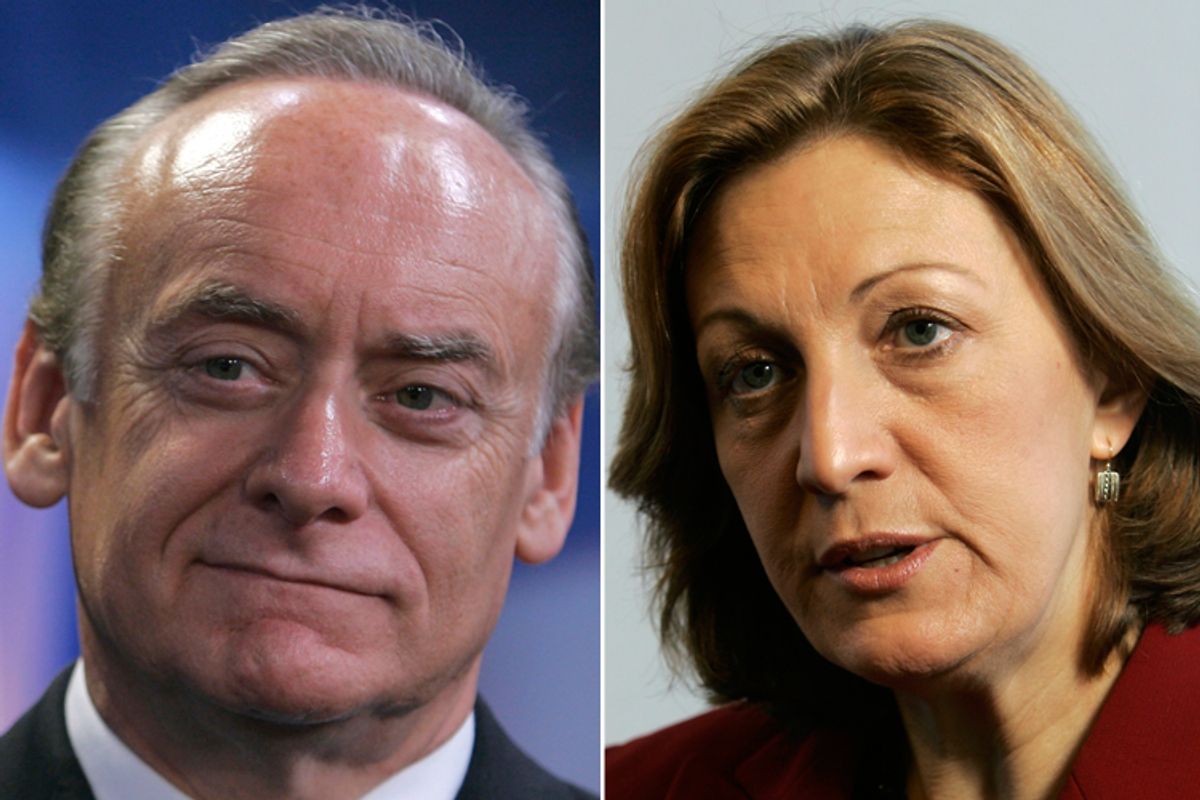 Government offices in Ohio opened bright and early Tuesday morning, ready to start processing the state's May 4 primary. Any voter who wants to can cast his or her ballot now, weeks before the election. Democrats around the state face a choice between Lt. Gov. Lee Fisher and Secretary of State Jennifer Brunner for the party's nomination for an open Senate seat.

Exactly how many voters realize an election is coming up, though, might be a different story.

A new poll out Tuesday from Quinnipiac University was just the latest to show that if voting ended this week, instead of starting this week, "undecided" would probably run away with the nomination. Despite decades in state government and the backing of the Ohio and Washington Democratic establishment, Fisher leads Brunner by only 33-26 in the Quinnipiac poll. Forty percent of likely voters hadn't made up their mind -- and two-thirds of those who had said they might change later. Brunner, meanwhile, is relying on volunteers to run her cash-starved, insurgent campaign -- trying to make a virtue out of necessity in hopes of pulling an upset.

Ohio, though, is high on a relatively short list of targets where Democrats have a real chance of victory this fall. The GOP nominee will be former House member and Bush administration official Rob Portman -- who Democratic strategists think could be vulnerable, in a state where jobs and the economy are far and away the top concerns. (Sen. George Voinovich, the Republican who has the job now, is retiring.) So even if Ohio voters aren't paying close attention yet, what happens there over the next five weeks could have people watching from far outside the state's borders.

"We think it's one of the prime pickup opportunities in the country," said Democratic Senatorial Campaign Committee spokesman Eric Schultz.

Which is what makes the lack of energy in the race so far a bit of a puzzle. Fisher was recruited last year to run once Voinovich stepped aside; Gov. Ted Strickland, his running mate in 2006, endorsed him quickly, and the party establishment promptly fell in line. (Strickland is now locked in what could be a tough reelection campaign of his own, against former Rep. John Kasich.) A few other potential opponents, like Rep. Tim Ryan, endorsed Fisher. The media firm founded by the people who ran President Obama's campaign, AKPD Message and Media, signed on to work for Fisher. The assumption was that the primary campaign was pretty much over.

Brunner, though, stayed in the race. She had become famous -- or as famous as a candidate for secretary of state can be -- to progressives around the country in 2006, when she succeeded her Republican predecessor, Kenneth Blackwell, in a win that Democrats particularly relished after the 2004 presidential election came down to Ohio. Her Senate campaign so far has tried to build on that buzz; progressive Ohio blogs endorsed her over Fisher, and her volunteers started door-to-door canvassing in December. Lacking the kind of establishment support Fisher got, Brunner is trying to run as an outsider, in a year when that label can't hurt. Still, so far she hasn't been able to generate the kind of national excitement among progressives that might help her raise more money. "The national netroots is for the most part disengaged from this primary," says Markos Moulitsas, founder of Daily Kos, where bloggers have been trying to get readers to donate to Brunner's campaign. "I don't see any major and aggressive netroots preference for Brunner. Whatever exists (and there is some) likely stems from the ages-old divide in this world: between insider (Fischer) and outsider (Brunner) candidates."

All along, though, Brunner has hung around in polls. One survey last week found she might do better than Fisher would against Portman in the fall. Fisher shook up his staff in early February, replacing his campaign manager Geri Prado and bringing in Jay Howser (who was suddenly available, since Sen. Chris Dodd, D-Conn., whom he was working for, announced he would retire). A few weeks ago, Brunner's supporters pushed hard to keep the Ohio Democratic Party's executive committee from endorsing Fisher, sending more than 74,000 e-mails to committee members; had Fisher won the endorsement, the race might have been over. In the end, Fisher didn't seek the endorsement, which his allies spun as the best way to ensure party unity no matter who won.

Whether Brunner can keep hanging around once television ads come into play is a little less certain. Fisher had more than $1 million in the bank at the end of December; Brunner had barely $60,000. Her campaign thinks early voting could have an unexpected impact on the result -- if voters send their ballots in before Fisher launches TV commercials, Brunner could benefit.

Neutral observers aren't sure what to expect. "Lee clearly has the funding to take a much more aggressive position in the primary than Jennifer does, though Jennifer appears to have a fairly large group of much more energetically committed volunteers," says Tim Burke, the Democratic Party chairman in Hamilton County, where Cincinnati sits, and the president of the Ohio Democratic County Chairs Association. "Whether that can make a difference, I don't know." Politically active Democrats know and like both of them, Burke says, but regular voters are pretty checked out.

In fact, Fisher's allies say part of the reason the race is still close is that voters don't really know who he is. "The reality is that people have a relatively short memory in politics," says Alan Melamed, a Democratic consultant in Cleveland and an unpaid advisor to Fisher's campaign. "The last time he actually ran himself at the head of the ticket was now 12 years ago. When you look at the polling, it's pretty clear that an awful lot of people may know the name, but they don't know him."

Fisher has been talking up green jobs lately, focusing on his work as the state's director of economic development while he's served as lieutenant governor; it's a good way to draw a contrast with Brunner, whose job deals with more esoteric election law matters, but it's also a potential pivot to dealing with Portman, whose record as the Bush administration's lead official for overseas trade is likely to draw heavy fire later in the year no matter who wins the primary.

For now, though, Portman aides don't sound too concerned. "Either job czar Lee Fisher or Secretary Jennifer Brunner would be a rubber stamp for the Pelosi-Reid-Obama job-killing policies and tax-and-spend agenda that's ruining Ohio's and our nation's chances for real economic recovery," spokeswoman Jessica Towhey e-mailed. "In stark contrast, Rob Portman has been traveling the state talking with working families and small business owners about a better way to put Ohioans back to work." He's also been raising tons and tons of cash -- he had $6 million in the bank at the end of December.

Which means whoever prevails in the Ohio primary will have to be ready to turn toward November quickly. Or all the hopeful talk about Democrats playing offense in a year when they're mostly playing defense won't matter much at all.