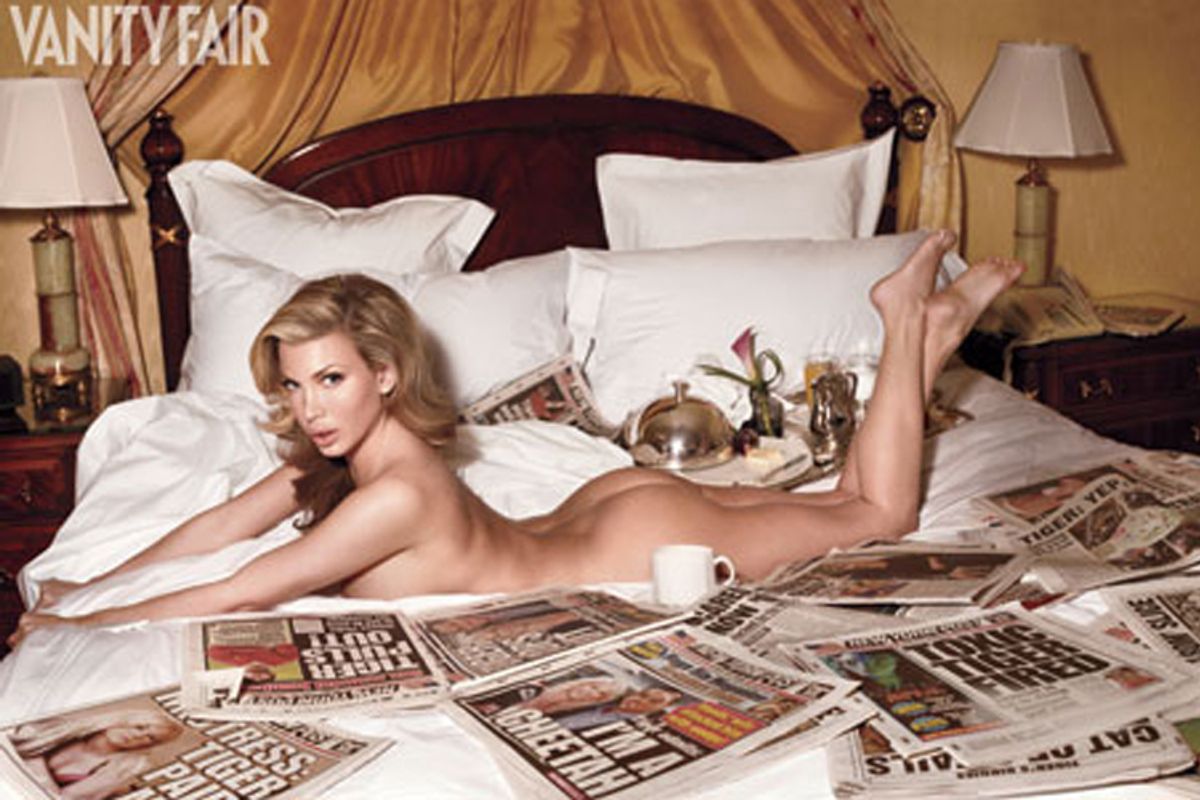 Today, Vanity Fair revealed new "shocking details" about Tiger Woods' affairs in a Web preview of an investigative piece the magazine promises is "the most complete account to date of the golfer’s secret life." But his mistresses, and their glamour-puss photo spreads, are the real stars of this story.

There certainly are some "shocking details" -- of the TMI variety -- for instance, that one of his lovers discarded her used tampon in a parking lot during a romp in Woods' car and then reporters from the National Enquirer, who had been trailing the golfer, allegedly used it to bribe him into doing an interview with a sister publication. The article's other major claims: Woods' inner circle knew all about his affairs, his late father had a drinking problem and he once bought mistress Mindy Lawton a chicken wrap from Subway -- no, say it ain't so.

I don't really care where Tiger Woods' mistresses choose to dispose of their tampons or which fast food joint they prefer for post-coital sustenance. In fact, I don't really care about his mistresses much at all. And yet, some people must really care, because here are four of them, being interviewed and photographed for Vanity Fair. All their dreams of fame and fortune have come true, only with an extra heaping of opprobrium. Just take a look at the magazine's behind-the-scenes footage (below) of the photo shoots: The women are primped and preened by a team of world-class professionals. In-between camera flashes, photographer Mark Seliger (what, they couldn't shell out for Leibovitz?) shouts, "Nice, nice, nice!"

Mindy Lawton is captured in a low-cut V-neck at the restaurant where she met Woods as a hostess; Michelle Braun is pictured busting out of her shirt; Jamie Jungers poses in garters in a corporate-looking office; and Loredana Jolie Ferriolo is shown butt-naked on a bed surrounded by a sprawling mess of tabloids and a room service tray (that's the image currently greeting visitors to the magazine's Web site). This isn't the first time Woods' mistresses have gotten the star treatment (Jaimee Grubbs already stripped down for Maxim and, of course, there was Howard Stern's "Tiger Woods Mistress Beauty Pageant"), nor is it the first time the "other woman" has gone glam for a mainstream publication. Earlier this month, Rielle Hunter posed for GQ wearing just an oversize dress shirt; and who could forget that other political paramour, Monica Lewinsky, who got a 1950s movie star makeover for her debut in the pages of Vanity Fair.

At this point, I wouldn't be surprised to see Michelle "Bombshell" McGee on the cover of the next New Yorker.