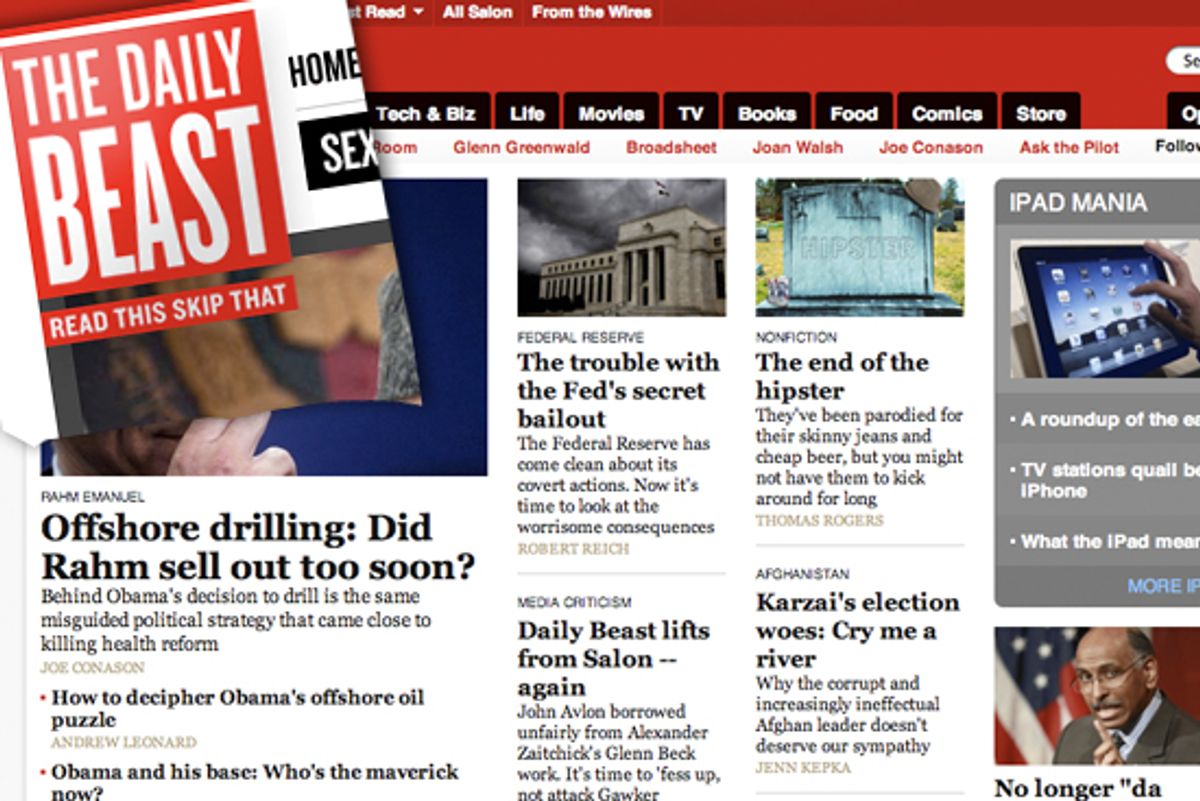 I was reluctant to wade into the problems with plagiarism at the Daily Beast the first time around, when correspondent Gerald Posner was forced to resign for borrowing material from other publications for many of his stories on the site. One of the stories he plagiarized that was never publicized happened to be a 2007 Salon story by freelancer Shaun McCanna, on heroin use by American military personnel in Afghanistan.

It took three weeks after McCanna confronted TDB with evidence of plagiarism, but finally the site added an editor's note crediting Salon.

When Gawker reported today that TDB again lifted from Salon -- this time "Wingnuts" author and "special correspondent" John Avlon borrowed liberally, without appropriate credit, from an Alexander Zaitchik story, "Glenn Beck's White Nationalist Fans" -- I was bothered, but I quickly reached out to editor Tina Brown, a longtime Salon friend, asking for an explanation, rather than responding publicly. I haven't gotten one yet; instead TDB's public relations person Andrew Kirk, in a rather shrieking statement, has asked Gawker to retract Hamilton Nolan's piece about Avlon's borrowings from Salon.

Nolan has nothing to retract. It's clear Avlon borrowed from Zaitchik beyond the bounds of fairness. In particular, he used four of the same quotes from the white nationalist Web site Stormfront.org, without credit. How do we know he got the quotes from Zaitchik? First of all, TDB already corrected an error in the piece; Avlon referred to the site as Stormfront.com, which hardly shows a great familiarity with the white nationalist Web world. Second, he quotes from obscure, long-ago threads that are hard to find; I worked with Zaitchik personally on the story to nail down the quotes and to link correctly. Even from long rambling threads, Avlon quotes what Zaitchik used verbatim, down to abbreviating and editing the same way. And he uses the quotes in the same order Zaitchik did, even though they're all from different threads.

Finally, the two articles end with the same Stormfront quote as their kicker.

Worst of all, Zaitchik went to TDB himself when he discovered Avlon's liftings weeks ago, and nobody at the publication ever got back to him.

It's bad enough to borrow this way from another publication; it's worse to accuse a third publication of getting its facts wrong and demand a retraction. TDB is a fairly young publication, and the breakneck speed of online journalism can cause all of us to run stories we later regret. But combined with the Posner case, and the failure to notify Salon that they'd uncovered an example of Posner plagiarizing one of our writers (let alone to apologize), I have to say, TDB has a problem that blaming Gawker isn't going to make go away. It's time for a correction and an apology to Alexander Zaitchik, who has his own well-researched book on Glenn Beck coming out in May.