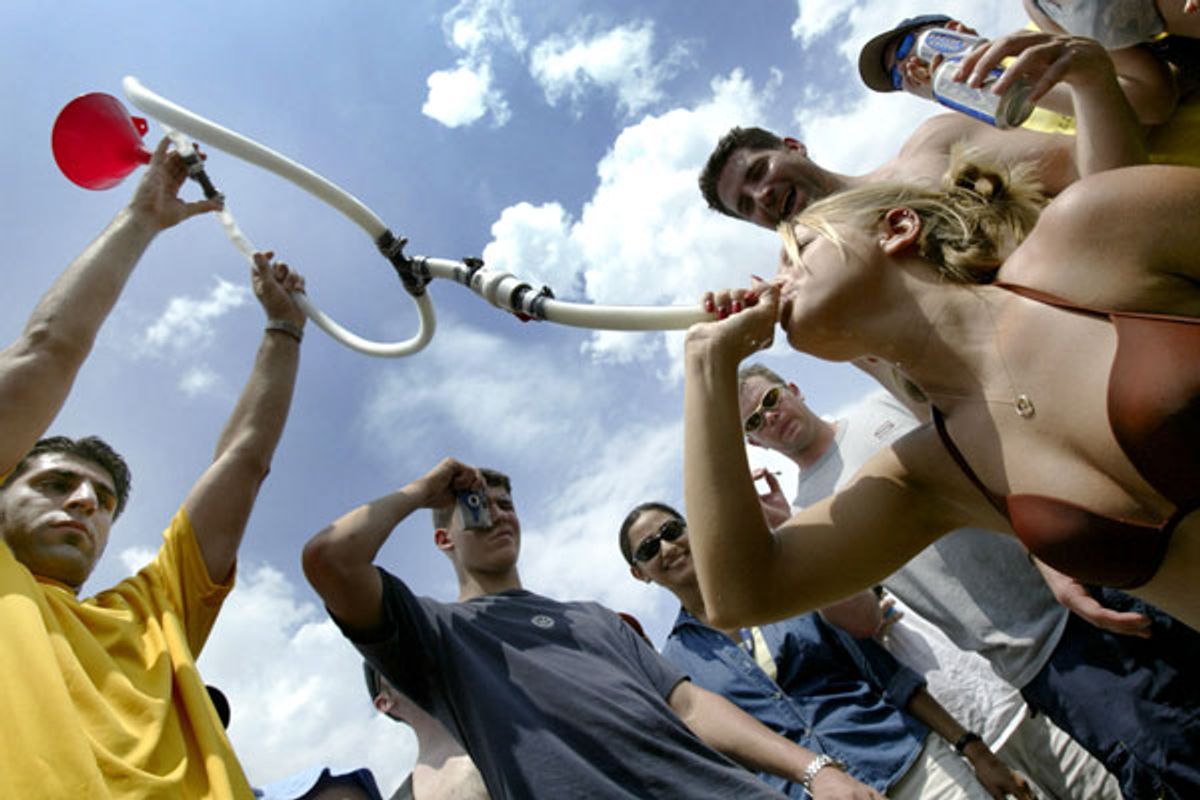 A college girl drinks beer through a funnel and pipe as thousands of college-age students gather on the infield in a traditional display of drunken fun on the day of the Preakness Stakes horse race at the Pimlico track in Baltimore, Maryland, May 15, 2004.
--

A rabble-rousing 20-year-old sparked such an uproar with a column about "date rape" for American University's student newspaper that it's gotten the attention of mainstream national media. Everything about Alex Knepper's article is designed for outrage: He calls out liberal activists for being a "sniveling bunch of emotional cripples" and defines feminist philosophy by the belief that "men are essentially born as eunuchs" -- and that's before the openly gay student even gets to his main point. By the time he does get there, he's thrown so many bombs that most feminist-minded readers will be too consumed with lobbing them right back in self-defense to really give his argument any consideration.

Not that such a flaming, gasoline-soaked polemic deserves delicate treatment. It isn't exactly delicate on his part to instruct his fellow female students to not "jump into the sexual arena if you can’t handle the volatility of its practice!" But I do think it's worth lending a patient ear to his frustrations, if only because I don't think they are all that unusual.

He writes, "Any woman who heads to [a fraternity] party as an anonymous onlooker, drinks five cups of the jungle juice, and walks back to a boy’s room with him is indicating that she wants sex, OK? To cry 'date rape' after you sober up the next morning and regret the incident is the equivalent of pulling a gun to someone’s head and then later claiming that you didn’t ever actually intend to pull the trigger." A more appropriate analogy, actually, would be that you walk into a gun shop, ask the clerk if you can take a look at one, and then decide not to buy it. In this clichéd frat party scenario, it's reasonable enough to suspect that these two randy coeds want to bone; that wouldn't exactly be a far-fetched reading of the situation -- but, it doesn't mean the girl has actually given consent, or that she's given up her right to refuse.

I suspect that what Knepper is trying to suggest is that sometimes young women head into a situation like a frat party with the intention of drinking away their inhibitions and getting a little wild, and then they wake up the next morning and feel a little embarrassed or regretful and they call it "date rape." It's a convenient straw-woman, because of course it isn't acceptable for women to decide that it was rape simple because they aren't happy with their choice the next morning. But what feminists are most often talking about when they talk about date rape are situations where a guy forces himself on a woman after she makes it clear she doesn't want to go any further or where she's drunk to the point of incapacitation -- in other words, we aren't talking about someone making a poor, regrettable decision, we're talking about someone being incapable of making a decision.

Here's where I actually agree with Knepper, though: "There’s rape and there’s not-rape, and we need a line of demarcation." But we don't achieve that by muddying the waters of consent, which he does by suggesting that certain behaviors -- for example, drinking at a frat party -- imply a "yes" to sex. I suspect Knepper is an immature, attention-seeking little twit, but there is a reason this is a perennial feminist debate: The gray areas do exist. How do we draw a clear line of consent, especially when alcohol is involved? Jaclyn Friedman and Jessica Valenti have suggested one idea: Relying on enthusiastic consent -- a "yes means yes" as opposed to a "no means no" model. It's a start, but we aren't likely to get much farther unless we keep having these conversations, preferably without the bomb-throwing.