What does it feel like to be a man beaten by your partner? Apparently, it feels like having your penis removed 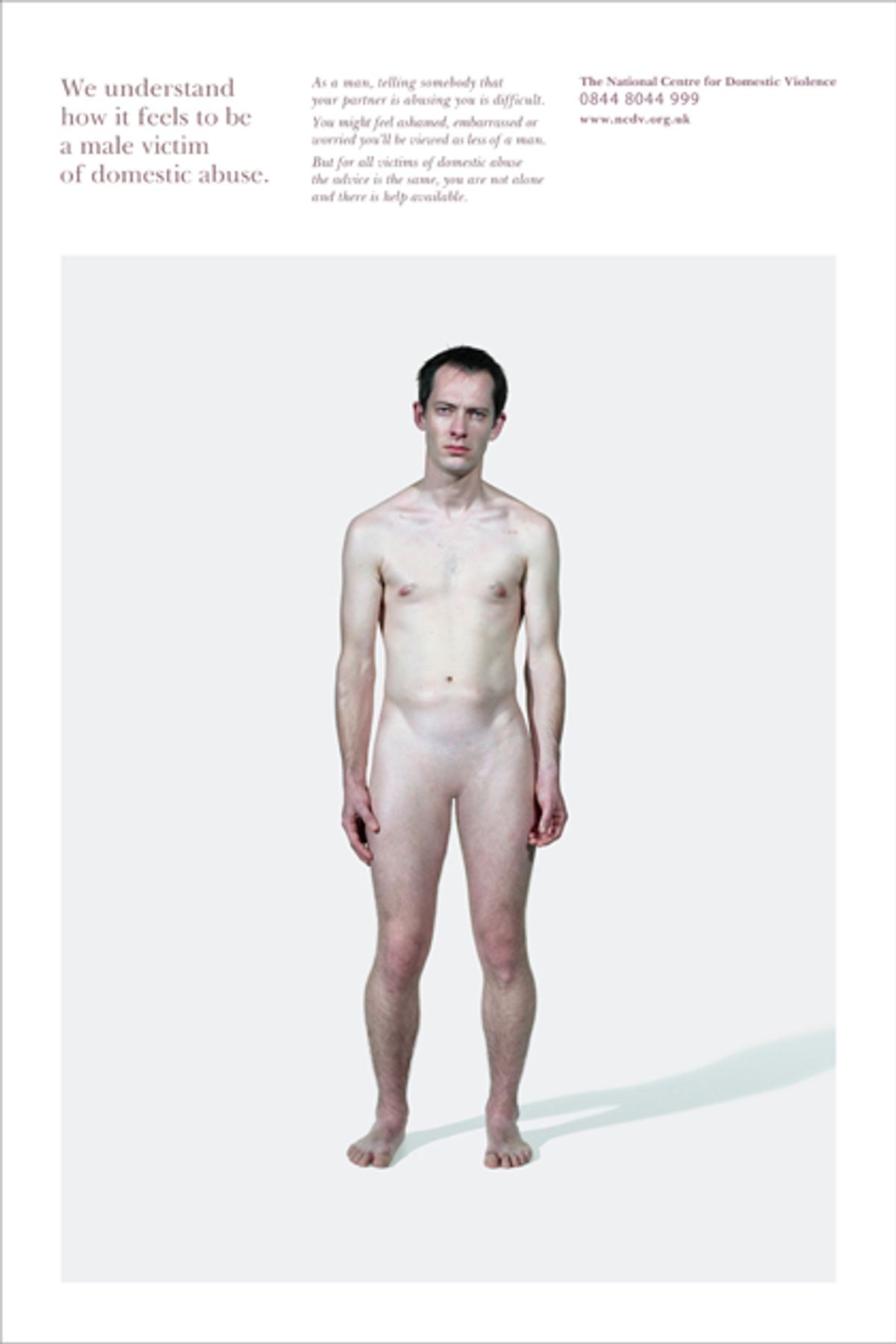 UK ad from the National Centre for Domestic Violence
--

Here is a list of ways being battered by a partner could make you feel: Betrayed, unsafe, compromised, unable to trust your partner or yourself. And here, according to one U.K. ad, is how it could make you feel if you are a man: As if you don't have a penis.

The ad for the National Centre of Domestic Violence, recently posted with no comment at Andrew Sullivan's blog, and with much comment at my Feministe colleague Cara Kulwicki's blog The Curvature, is meant to combat the fact that men often fear reporting their own abuse. It starts off well. "We understand how it feels to be a male victim of domestic abuse," the copy reads. "As a man, telling somebody that your partner is abusing you is difficult. You might feel ashamed, embarrassed, or worried you'll be viewed as less of a man." All good points. However, they are in relatively small proportion to the photo of a man with airbrushed-out, perfectly smooth genitals, which takes up over two-thirds of the ad space. The overall look is not so much "victim of ongoing abuse" as "somewhat hairier Ken doll." And, being a photo of a naked person with a somewhat disturbing crotch, it is far more likely to be remembered than any of the words printed above it.

Of course, intimate violence affects both genders. And it's true that ideas about masculinity -- that men have to be strong, in control, unafraid, invulnerable -- can keep men from acknowledging the seriousness of their situation, or from reporting it. However, it's unlikely that a man who feels his masculinity will be compromised if he reports abuse is going to be persuaded otherwise by an ad that basically says, "so, being hit by your partner made your dick fall off."

And then, there's the other implication: That having a penis is a sign of power, that not having one is a sign of powerlessness, that penises are nature's way of signifying a totally-not-abused person. An ad that means to tell us that men can be abused, and that this is serious and deserving of attention, is equating penises with invulnerability and the lack of them with victimization. It ends up reinforcing the same gender dynamics it protests. People who have dicks aren't abuse victims; people who are abuse victims don't have dicks. Being a man without a penis is terrible, largely because it makes you like all those other natural-born victims out there with a reputation for dicklessness. You know: women.