Some senators now offering a more realistic picture of cause's prospects -- not John McCain, though 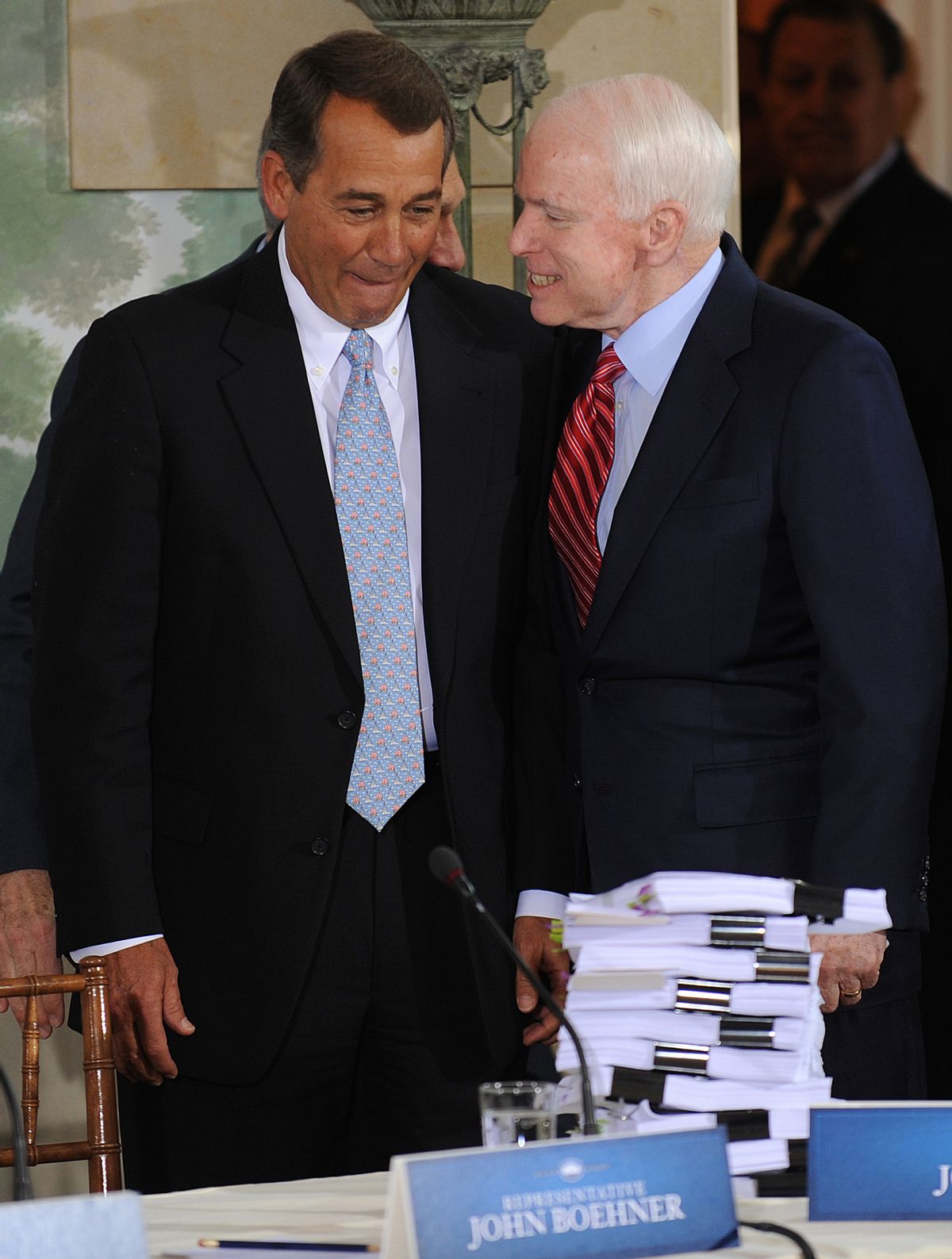 US Republican Congressman from Ohio John Boehner(L) talks with US Republican Senator from Arizona John McCain (R) prior to US President Barack Obama's opening remarks at a bipartisan meeting to discuss health reform legislation at the Blair House in Washington, DC USA 25 February 2010. President Obama is hosting a televised health care summit with Republican and Democratic lawmakers in efforts to craft healthcare overhaul legislation. (Pool)
--

After healthcare reform was passed, Republicans started talking a big game about running on repeal this year -- presumably toward congressional majorities -- and then actually repealing it next year. At some point, though, reality had to enter the picture: Even if the GOP did manage to capture both houses of Congress, there's no way they'd be able to override the inevitable veto from President Obama.

Still, conservatives have been dogged about pushing Republican politicians to support a strict line on repeal. For the most part, it's worked, as deviations from the party line have been quickly slapped down. But now some Republican senators are starting to paint a more realistic picture.

"It may not be total repeal at the end of the day," North Carolina Sen. Richard Burr, who's up for reelection, said in a recent interview. "It may be a series of fixes over the course of this bill getting enacted that allow us to change and possibly bend that cost curve down."

Meanwhile, Corker's fellow Tennesseean, Sen. Lamar Alexander, the Senate's third-ranking Republican, predicted that a larger debate about the role of government -- symbolized by healthcare reform -- will "define every congressional race" this year. "As a result of that debate, I think there [are] going to be at least big changes in the bill."

That language certainly sounds tough, but because it's hedged so far from repeal, it might not be enough to satisfy some conservative activists.

Then there's Arizona Sen. John McCain, who -- during a radio interview Thursday -- managed to sound both realistic and completely unrealistic about the prospects of a push for repeal.

"When I say repeal, people say you're not going to be able to do it," McCain said. "I am confident we will get majorities in both houses in the fall. And that means the power of the purse ... If we cut off the money, it doesn't take an override to a veto."

This statement has been taken seriously by at least one observer, as an indication the GOP is considering alternatives to outright repeal. But it sounds more like the words of a man running in an Arizona Republican primary against a more conservative candidate than anything else.

Congress' budget is subject to a presidential veto, as is any single piece of legislation cutting off the funding appropriated in the reform legislation. Republicans could try attaching such a measure to anything that moves in Congress, in the hope that Obama would finally meet some bill he was unwilling to veto, but considering that this is his signature accomplishment thus far, that seems like a long shot. Moreover, there are elements of the law that have nothing to do with Congress' power of the purse -- the prohibition on insurers discriminating on the basis of preexisting conditions, for example -- and cutting off the money while leaving those other sections untouched would make for a real mess.