The end of the hipster

They've been parodied for their skinny jeans and cheap beer, but you might not have them to kick around for long 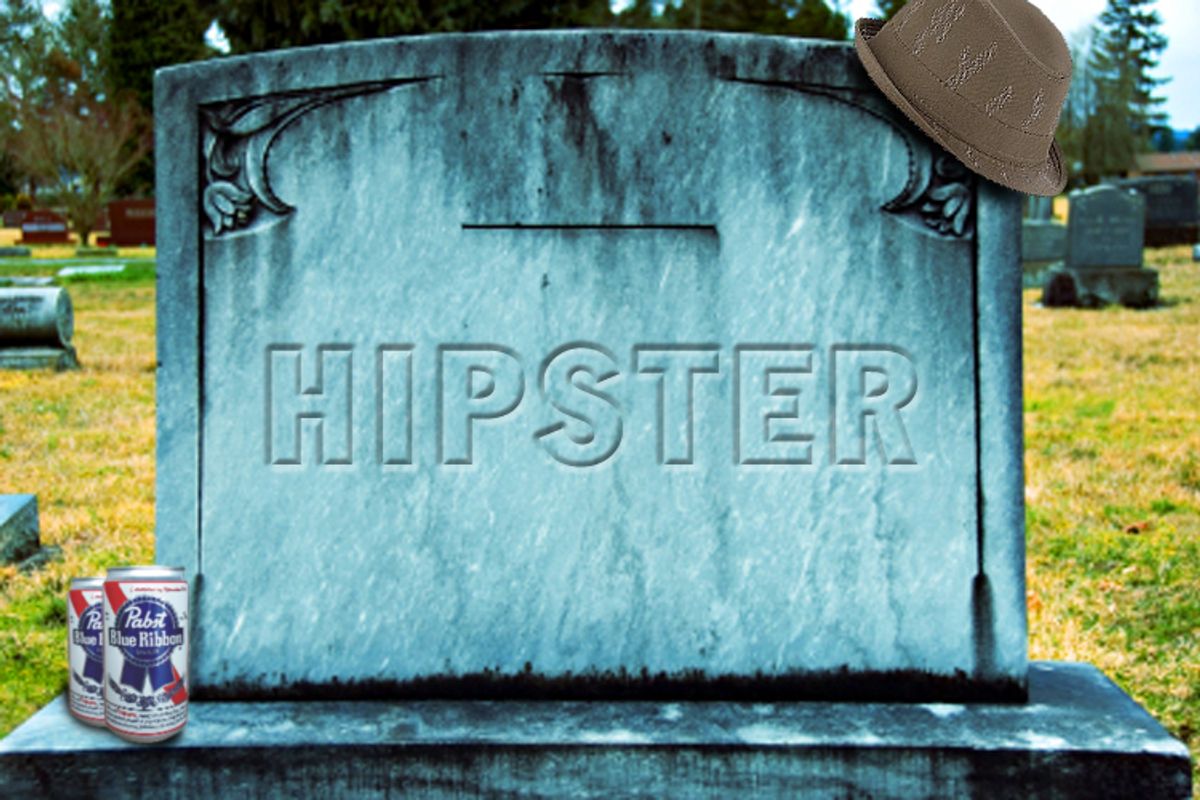 Mention the word "hipster" these days, and a few things come to mind: Young, white 20-somethings dressed in skinny jeans and lumberjack shirts, and wearing thick-rimmed glasses; neighborhoods like Williamsburg, in Brooklyn, and Silver Lake in Los Angeles; trust-fund kids; Chloë Sevigny; cocaine; ironic mustaches; and likely some mixture of contempt and hatred.

Of course, this is just the latest iteration of the term "hipster." Norman Mailer famously used the word to describe the middle-class whites who fetishized jazz culture in the 1920s, 30s and 40s, and in 1958 Jack Kerouac applied it to the members of the Beat Generation. For most of the twentieth century, it was used as a vague and usually pejorative term for a person with trendy countercultural interests.

The latest, turn-of-the-millenium incarnation -- usually represented by rich, white boho kids -- captures an aesthetic cemented by magazines like Vice, nightlife blogs like Last Night's Party, and stores like American Apparel and Urban Outfitters. In its brief time, it has managed to arouse a remarkable amount of scorn. The hipster has been parodied in online series like "The Burg," Gawker's now-defunct Blue States Lose photo feature, viral videos like "Hipster Olympics" and, most prominently, in the Tumblr blog sensation Look At This Fucking Hipster.

The brainchild of Williamsburg comedian Joe Mande, Look At This Fucking Hipster is a collection of pictures of young people doing stereotypically hipster things -- drinking Pabst Blue Ribbon, wearing tights, getting ill-advised tattoos of glasses on their face -- with Mande's mocking captions (a photo of a man wearing a green body suit is subtitled "I’m gonna CGI a bigger douche into this photo later"). Despite its simple presentation, the blog, which began in April of 2009, managed to capture the attention of thousands of readers and has now been turned into a book called, of course, "Look At This F*cking Hipster."

The timing of the book, however, seems rather ironic, given that the age of the hipster -- and of hipster hate -- seems to be winding down. In recent months, the word has been reaching saturation point, popping up in mainstream news outlets like the New York Post, the New York Times and, occasionally, Salon, often as a catchall term to describe young people. Foster Kamer argued for an end to the term in the Village Voice, and Gawker recently ran a poll to select a replacement. (The uninspiring winner: "Fauxhemian.")

Salon spoke to Joe Mande by phone about hipsters' self-infantilizing style, the homophobic nature of the backlash, and the impending end of hipsterdom.

How did you get the idea for your blog?

My parents were in town last year, so I took them out to dinner in Williamsburg, and my dad kept asking questions about the young people he saw walking down the street. He was asking: "Are they hippies? Are they against the war?" I was like, "No, it's not really about the war." A week later I had a couple of pictures on my iPhone I'd taken of people in my neighborhood, so I posted them. The short answer is that it was to help explain what hipsters were to my dad.

So what is a hipster, exactly?

It's a broad term, but I consider it to be rich white trash -- or people trying to stretch out adolescence as far as it'll go. It has to do with a person's attitude, and lifestyle choice, but it's also about fashion. They wear skinny jeans and ironic facial hair, and handlebar mustaches and V-neck shirts and dumb hats. They wear big glasses -- that's a key thing usually -- asymmetrical haircuts, wool caps in the summer, Yasser Arafat scarves [kaffiyehs], American spirit cigarettes, and drink Pabst Blue Ribbon or cheap beer. It's all about people trying so hard to look like they're not trying hard.

When I think of hipsters I think of adults who don't want to grow up.

Even though they're young adults and often college-educated, they have a certain kind of childish quality to them. They're like college-educated babies. I think it might have something to do with the fact that when we grew up everyone got trophies even when we lost. Everyone is special and everyone was in the gifted program. Everyone feels like a special snowflake, so we resent being lumped in a group. I think that's also why hipsters don't like being called hipsters. It's a giant country club where everyone's a member but nobody will admit it. I've had the biggest hipsters come up to me and say that they "love my Web site" and they "hate hipsters."

Why do you think there's this widespread hatred for hipsters?

There's something about people acting like children and having what seems to be no real serious problems in their life that people find annoying.

I definitely don't think it's cool to not have a job right now. It's good to be a productive member of society. I don't think it is that easy to be in New York and be out of college and not have a way to pay your bills right now, and I don't think there's that many people anymore with rich enough parents.

I know what you're saying. I'm grossed out by how many people send me submissions for the blog that just say "faggot," or, "Here's my faggot friend." But I'm sure that's the way many people who don't live in New York have always, to some extent, thought of New Yorkers.

At this point, even my sister, who lives in Edmonton, Canada, is making comments about hipsters -- and, trust me, Edmonton is not a very hip city. Why do you think they've exploded into mass consciousness in the last few years?

Hipsters have been around since about 2000 -- according to Paste magazine's "Evolution of the Hipster" chart. So people who were 18 then are 27 or 28 now. They're in society now. They're now at the age where they have actual jobs, where they have to deal with actual adults, which is why I think it's getting on more people's radar screens.

Do you think the term has become meaningless?

"Hipster" has just started entering newspapers and media, and I think it's largely just become a way for people to describe a young adult. I think that recent Gawker post touched on something -- the term is starting to lose its meaning.

I think it's an easy, loaded term that's condescending. It's easy for someone to call a young person a hipster -- it's way easier than saying aimless or stupid. When people hear "hipster," they get the idea that it means a person that doesn't have a job.

I think it's just becoming a way to define my generation. I don't even know what we're called, but it's becoming the name for us. You know how, when they talk about the '60s, they always use stock footage from Haight Ashbury, or show a montage of people with flowers tripping out and playing Jefferson Airplane? I'm sure in 50 years, when they talk about this decade, they're going to be showing people with ironic mustaches.

So the era of the hipster is coming to an end?

Part of me hopes it is, and part of me doesn't. But I hope it lasts at least another three to four months for the purposes of this book.

You were one of the most high-profile Tumblr-to-book deals. How did that happen?

It was overwhelming. I kept the site anonymous at first because I didn't know what to do with it. And then three weeks in, my traffic was just insane. I started getting these feeler e-mails from book agents asking if I wanted to make it a book. I found out through a friend in publishing that some guy was trying to schedule appointments with publishers saying he was me, trying to get a book deal. That's how the book deal happened. It was me trying to make sure this other guy wasn't going to get a book deal.

So this was a defensive book deal?

Yeah. People gave me shit about my artistic integrity when the book deal was announced. "How could you do that?" Who are you? Fuck you! What am I supposed to do, say no to writing a book? I can do whatever I want. It's a Tumblr! I didn't even buy my own Web space. I just used the default settings!