RomneyCare looks an awful lot like ObamaCare. Here's why the right might give Mitt a pass anyway 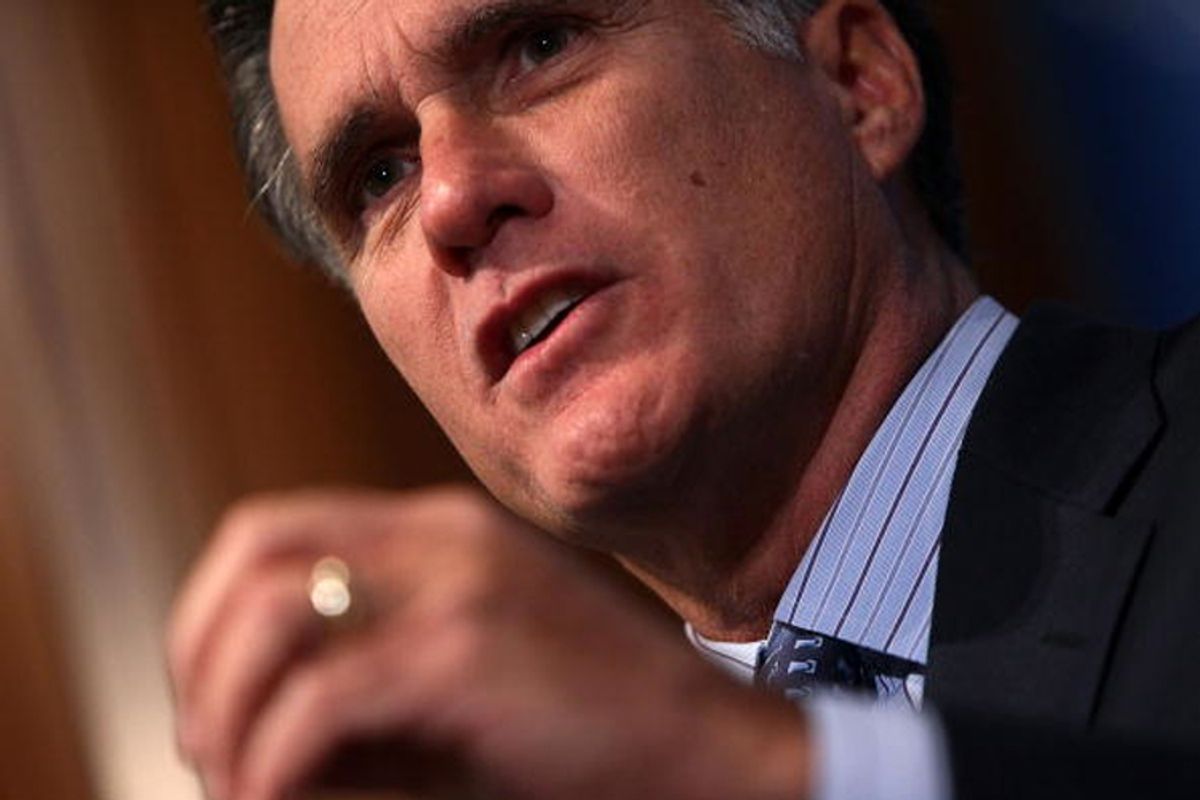 Mitt Romney in Washington on March 5.
--

If logic reigned in the world of politics, then yes, Mitt Romney would be a dead candidate walking right now.

By now, you know all about the one-time Massachusetts governor's healthcare problem: The plan he signed into law in the Bay State four years ago is pretty much the same (on a smaller scale, of course) as the plan President Obama and the Democrats just rammed down Americans' throats, to use the right's preferred parlance.

This has, understandably, prompted a flood of Romney political obituaries. After all, there won't be much daylight between the major GOP White House contenders on most issues, so Romney's healthcare apostasy should stand out that much more. Parallels are being drawn to Hillary Clinton's 2002 vote for the Iraq war, and how it came back to bite her in 2008.

In a Tuesday post titled "Romney Death Watch," the New Republic's Jonathan Chait wrote: "This is going to be the basis for a devastating attack, and I don't see how Romney answers it."

But there's a major flaw in this thinking: It assumes that voters -- Republican primary voters, to be exact -- are logical and rational creatures. But they aren't. Voters, we have seen over and over, are willing to excuse and rationalize apostasies, inconsistencies and outright hypocrisy when -- at a very basic level -- they like and identify with a politician.

The right's idolatry of Ronald Reagan is a perfect example. On paper, conservatives should regard the 40th president's tenure with very mixed sentiments. He grew the size of government, exploded the national debt, offered "amnesty" to millions of illegal immigrants, sold arms to Iran, appointed a pro-Roe justice to the Supreme Court, and championed a tax reform plan that raised corporate and some individual rates.

But to this day, conservatives accord Reagan godlike status -- and happily rationalize away his breaches of orthodoxy. Their adoration has something to do with ideology -- he did slash taxes in 1981, after all, and he did load the federal courts with right-wing judges. But it has a lot more to do with the feelings that Reagan, with his grandfatherly warmth, patriotic homilies, actor's stage presence, and lip service to right-wing causes, managed to evoke in them. They instinctively liked him and worked backward from there, inventing one reason after another to look the other way when he strayed.

Barack Obama benefits from this same tendency on the left. Just consider (as Salon's Glenn Greenwald has pointed out) how many liberals have made excuses for the president as he's pursued terrorism policies that they once decried as an affront to the Constitution, back when George W. Bush was implementing them.

Romney is no Reagan and he's no Obama, that's for sure. But he is, in his own way, a charismatic figure. Something about his confidence, his vigor, his ridiculously white teeth, his picture-perfect, wholesome-seeming family and his business background prompts conservatives to find ideological rationales for liking him.

We saw this happen in his 2008 campaign. As Romney prepared for that race, there was little reason -- on paper -- to suspect he'd be much of a player, given the moderate-to-liberal image he'd crafted in Massachusetts. He had, after all, once promised to do more for gay rights than Ted Kennedy. And he hadn't just called himself pro-choice; he'd gone on statewide television to tell a tear-jerker story about a relative who'd died after a back-alley abortion,  proclaiming that the incident had made him resolve never to let the government infringe on a woman's individual choice. And on and on.

And yet, Romney nearly won the GOP nomination in 2008. Outside of Massachusetts and Utah (and maybe Michigan -- sort of), Romney was largely unknown before the '08 campaign, and his initial poll numbers were minuscule. It's a testament to the power of his personal appeal that, by the early fall of 2007, he had actually taken the lead in Iowa polls. It was the Reagan/Obama phenomenon at work: Conservatives wanted to like him, and worked backward from there.

Yes, it's true that many on the right were not persuaded. All of Romney's liberal laundry was (exhaustively) aired, and it was enough to cost him Iowa and, thus, the nomination, But what was more remarkable was how many conservatives were happy to ignore it all -- to rationalize all of his past statements and actions and to embrace him as one of their own. He ended up garnering more than 4.5 million votes in the primary season, more than anyone except John McCain.

So it's actually not hard to see Romney skating on healthcare, at least when it comes to the race for the GOP nomination in '12. Sure, it will provide more fodder for the conservatives who already see through him, and it will turn off some independents (who can participate in some primaries and caucuses). But will it really cut into Romney's base? The same folks who saw the clips of him talking about back-alley abortions and gay rights back in 2007 and '08 -- and who signed on anyway? Chances are, they'll buy into his rationalizations on healthcare, too, no matter how irrational.

Moreover, McCain in '08 provided a road map for winning the GOP nomination even while alienating the party base on a key issue, immigration, in his case. Essentially, McCain cobbled together a coalition of some conservatives and just about all of the party's moderates and pragmatists, while his opponents chased votes on the right. He won key early contests with less than 40 percent of the vote, then cleaned up on Super Tuesday in the big states that have more pragmatic GOP electorates -- New York, New Jersey, Illinois and California, for example. At the same time, both Romney and Mike Huckabee held each other in check in the South. Neither was able to monopolize the region.

This strategy won't work if the right -- particularly in the South -- is united behind one other candidate. But, for now anyway, the right figures to be as fractured in '12 as it was in '08. A repeat of 1988, when George H.W. Bush built an impenetrable Southern firewall, or 2000, when his son essentially did the same, doesn't seem likely. So if Romney can make it past the early tests and hold his own in the South (as McCain did in '08), then he, too, can clean up in the big, delegate-rich and (sort of) moderate states. In other words, there's room for him to take a hit on healthcare and survive, just as there was for McCain two years ago.

Before the healthcare flare-up of the last two weeks, Romney enjoyed strong support from a big chunk of the party's base. He also faced intense skepticism from other conservatives, because of his past flip-flops or his religion (or both). And he was fairly well-positioned to claim the backing of the party's establishment in '12, as the "next in line" candidate. Here's guessing that healthcare won't alter this basic dynamic, no matter how much we hear about it between now and '12.