For the GOP, Michael Steele no longer "da man"

Republicans are abandoning their stripper-tainted organization, the RNC. So why won't they just fire its leader? 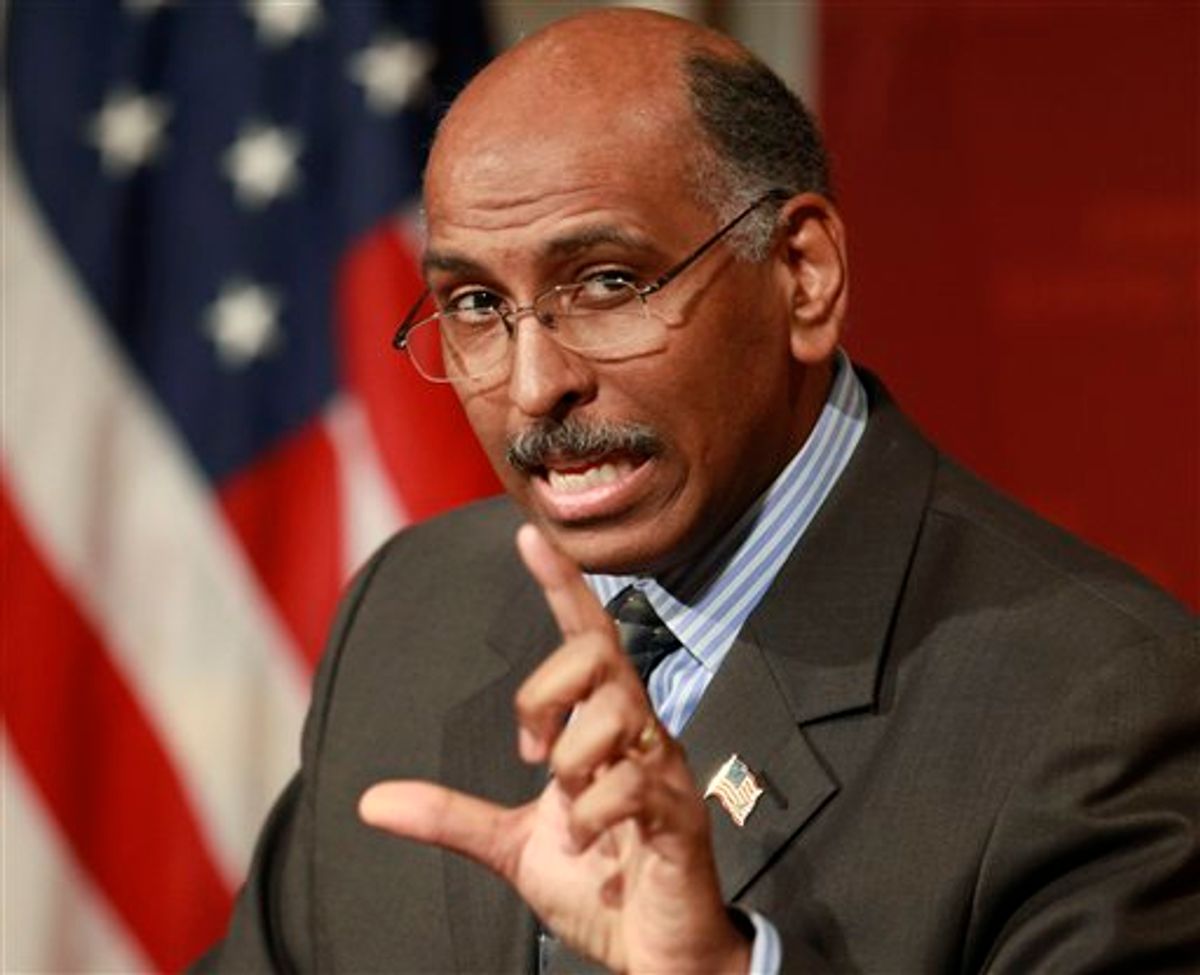 Happy relationships between a political party and its chief are all basically alike: if the boss hires a competent staff, raises a lot of money, disburses it effectively and delivers the message well on television -- well, that’s the job. Parties unhappy with their chief, on the other hand, are unhappy in their own special ways.

Take Michael Steele, current chief of the Republican National Committee. Since almost immediately after he was elected to his position, Steele has been on a job deathwatch. He’s attacked Rush Limbaugh, committed multiple gaffes in public and second-guessed the GOP’s electoral chances. He criticized his own party in his book, which he hadn’t told anyone he was writing, and traveled around the country giving paid speeches -- a totally inappropriate activity for a party chairman. There have also been continuous problems with his management of the staff of the RNC. Most recently, he's gotten in hot water for the party thrown on the RNC's dime at a southern California bondage-themed nightclub.

Although Steele has already caught flak for his fundraising, things are about to get worse. In light of the recent embarrassment, conservatives of various stripes may seek to cut the RNC out of the process entirely. Tony Perkins, head of the Family Research Council, is urging Christian conservatives to give directly to candidates they support. In his next newsletter, Perkins will tell supporters, "I've hinted at this before, but now I am saying it: Don't give money to the RNC. If you want to put money into the political process, and I encourage you to do so, give directly to candidates who you know reflect your values."

The Republican establishment is also seeking to create an organization through which wealthy business conservatives can support party efforts without having to give Steele their money. The new group, to be called American Crossroads, will be run by Mike Duncan, Steele’s predecessor at the RNC, and advised by other recent RNC chairs and Karl Rove. American Crossroads is seeking to raise $52 million, and by recruiting leadership of such impeccable insider credentials, is obviously presenting itself as a competent, shadow version of the RNC.

So if Steele's leadership is so bad that he’s forced Republicans to abandon their central party organization, why don’t they just toss the guy? This question has come up a few times since he became chairman, and there’s usually one answer: GOP leaders are afraid of how it would look for their all-white party to fire their first black leader. As one high-level operative told Politico in January, "You're not going to dump the first African-American chairman. That's the only reason. Otherwise, he'd be gone."

Here it's worth remembering the context in which Steele got the job. He came out on top of a short, intense and racially charged contest, in the immediate wake of the election of Barack Obama. Among the candidates he defeated were two different southern state Republican Party chairmen who’d revealed themselves as something less than paragons of racial egalitarianism.

The New Republic’s Jonathan Chait nailed the basic dynamic of Steele’s victory earlier this year, the last time Steele was fighting for his job: "The immediate Republican response to Obama has been to find their own black guy." Chait’s argument is that conservatives have come to believe that candidate Obama's race was an unfair boon, and so have attempted to ape liberal rhetoric and symbolism on race, but haven't appropriated any of the actual anti-racist content. The point for Republicans isn't actually to understand what racism is or where it comes from; it's to show, with an extreme level of self-consciousness, that of course they aren’t racist. Now can they please have some black votes?

The irony here is that, of course, it would be totally understandable for Republicans to fire Steele. He is, pretty indisputably, bad at his job. But because they have so little sense of what does or does not actually constitute racism, they're painfully tone-deaf. GOP leaders thought that electing a black chairman who talked about courting black voters in "urban and suburban hip-hop settings" with "fried chicken and potato salad" might actually work. As Rep. Michelle Bachmann, R-Minn., put it to Steele, "You be da man!"

Now they think firing him will be hell on their image, because they again have no genuine understanding of the real source of the near-universal African-American hostility to their party. That is, Republicans think racial politics in America is all symbolism. Putting Steele at the helm as a play for black support belittled the genuine, substantive and diverse concerns of black Americans, which the party has no real interest in addressing. Showing him the door might be embarrassing for a few days, but it probably wouldn't cost the party with black voters in the long term. Frankly, it couldn't: Republicans have no black support to lose.