Headaches and high ticket prices: Welcome to the future of movies 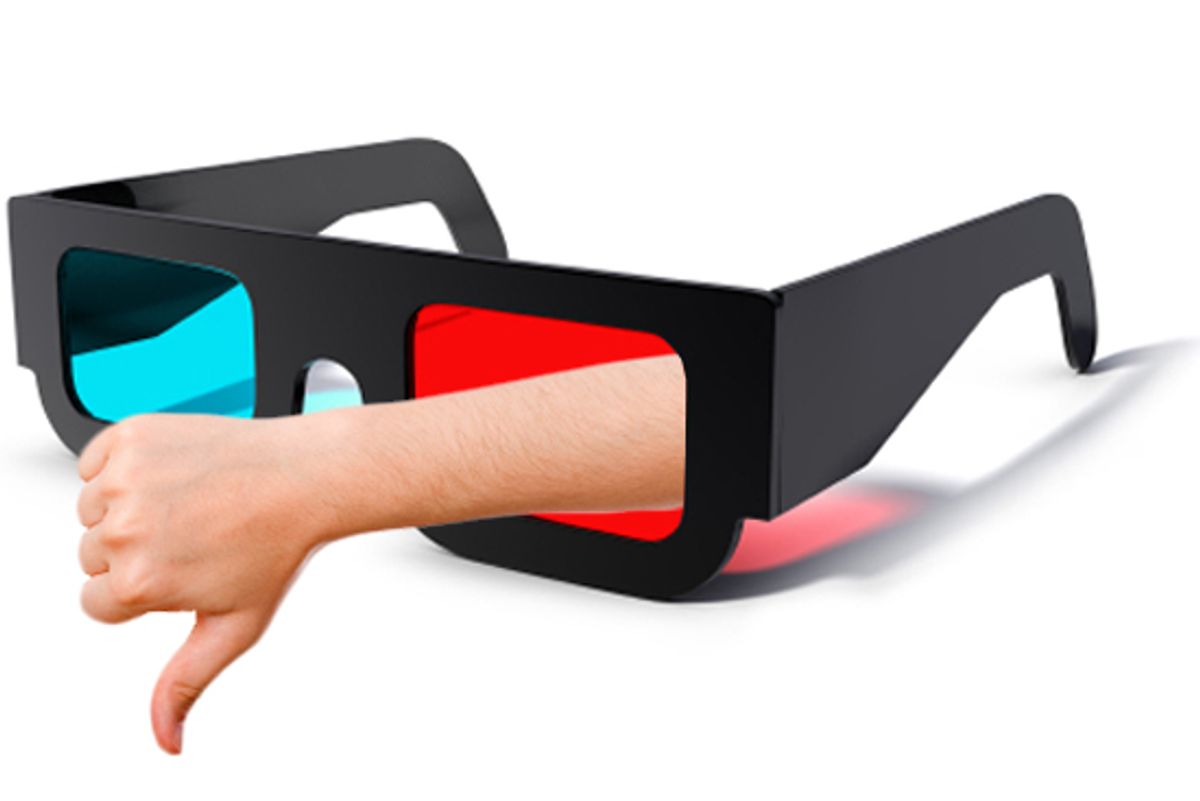 I knew it was all over a few nights ago, when I saw the Sears ad for 3-D television. After all, the current top two movies in the country are the 3-D fantasies "Alice in Wonderland" and "How to Train Your Dragon." Resistance is futile, non-immersive fogies. The future of entertainment is here, reaching out from the screen to grab you by the short and curlies, whether you like it or not.

The 3-D revolution has been a long time coming. The descendant of old-timey stereoscope photography, the form has been around since the 1920s. But even the spooky sci-fi movies of the '50s and the intermittent slasher flicks from the '80s and beyond never fully caught on as anything more than a fad. In the past few years, however, advances in technology changed all that, creating a small but substantial boom in action and children’s movies that leapt at their audiences. And then there was "Avatar." Over $2 billion and counting in worldwide box office. Nine Oscar nominations. And those words that are music to Hollywood's ears: repeat business. Game over.

And so, despite auteur Michael Bay's succinct observation that "You can't just shit out a 3-D movie," filmmakers have been scrambling to do just that, hastily converting this spring's big-budget epics to capitalize on our suddenly bottomless appetite for more intense fireballs.

I realize that a lack of enthusiasm for 3-D makes Michael Bay and me big old cranks, but crikey, we can’t be alone in this. I can’t be the only astigmatic who would prefer not to have to choose between wearing her own glasses and seeing a blurry movie, wearing the 3-D glasses and seeing a blurry movie, or wearing two pairs of glasses on top of each other. I can’t be the only migraine sufferer who doesn’t need much visual overload to trigger an episode that’ll leave me curled up in bed weeping in pain. I sure as hell can’t be the only mother who just about fainted dead when she saw the inflated ticket prices for "Cloudy With a Chance of Meatballs." Now throw in certain vulnerable people with myopia or neurological imbalances (a recent conversation on Epilepsy.com, for example, was full of moviegoers who claimed that "Avatar" had triggered seizures), add the financially pinched, plus a couple of high-profile filmmakers, critics and anyone who doesn’t particularly fancy having Jim Carrey’s claw coming at them, and I do believe I've got company.

I understand the appeal of 3-D. To an extent, I even appreciate it. I adore movies -- and not just the subtitled, Chekhovian kind -- and believe seeing them should be a big event. Sitting in the dark with other people, sharing the fantasy -- that’s magic. The night I observed a guy next to me on the subway watching "Gladiator" on his iPhone, I thought, we may be losing some of that cinematic experience here.

So I appreciate that filmmakers, faced with declining ticket sales, have tapped into moviegoers’ desire for a little razzle-dazzle. I understand the allure of the illusion of interactivity -- you can’t watch the movie unless you, the viewer, don the equipment and do something. No wonder 3-D has been a bonanza for the industry -- 2009 was Hollywood's best year in history. And if you want to spend 20 bucks to see Liam Neeson release the Kraken right into your lap, I say, knock yourself out. I’d just like the option of seeing that too -- in a format that won’t make me throw up.

Technology is in a perpetual state of refinement, and the day is imminent when we won't need clunky glasses to watch Buzz Lightyear do his thing, when movies will look more like real life and less like "Dr. Tongue's 3D House of Beef."  The 3-D effects in "Avatar" are proof of the indisputably superior potential of the form -- James Cameron managed to pack a lot of breathtaking images in a fairly unobtrusive way. So unobtrusive, in fact, I could have done just fine without any of it. And while I’ve certainly heard plenty of people comment on the effectiveness or lack thereof in recent 3-D movies, I’ve yet to hear anyone say they chose a film exclusively based on its number of dimensions.

But even if the technology becomes less nauseating, ticket prices likely won't. And the only thing even more wince-inducing than my migraine-prone brain and my failing eyes is my recessionary wallet. I don't need to feel like I'm sitting in the middle of a meatball shower. I need to feel like I can take my kids to the movies now and then without taking out a second mortgage. So while I'd love to be first in line for the next "Harry Potter,"  I won't be. It's just not worth all the headaches.

Clash Of The Titans