In Arizona, a conservative challenger hasn't caught up to McCain for the Republican nomination for Senate 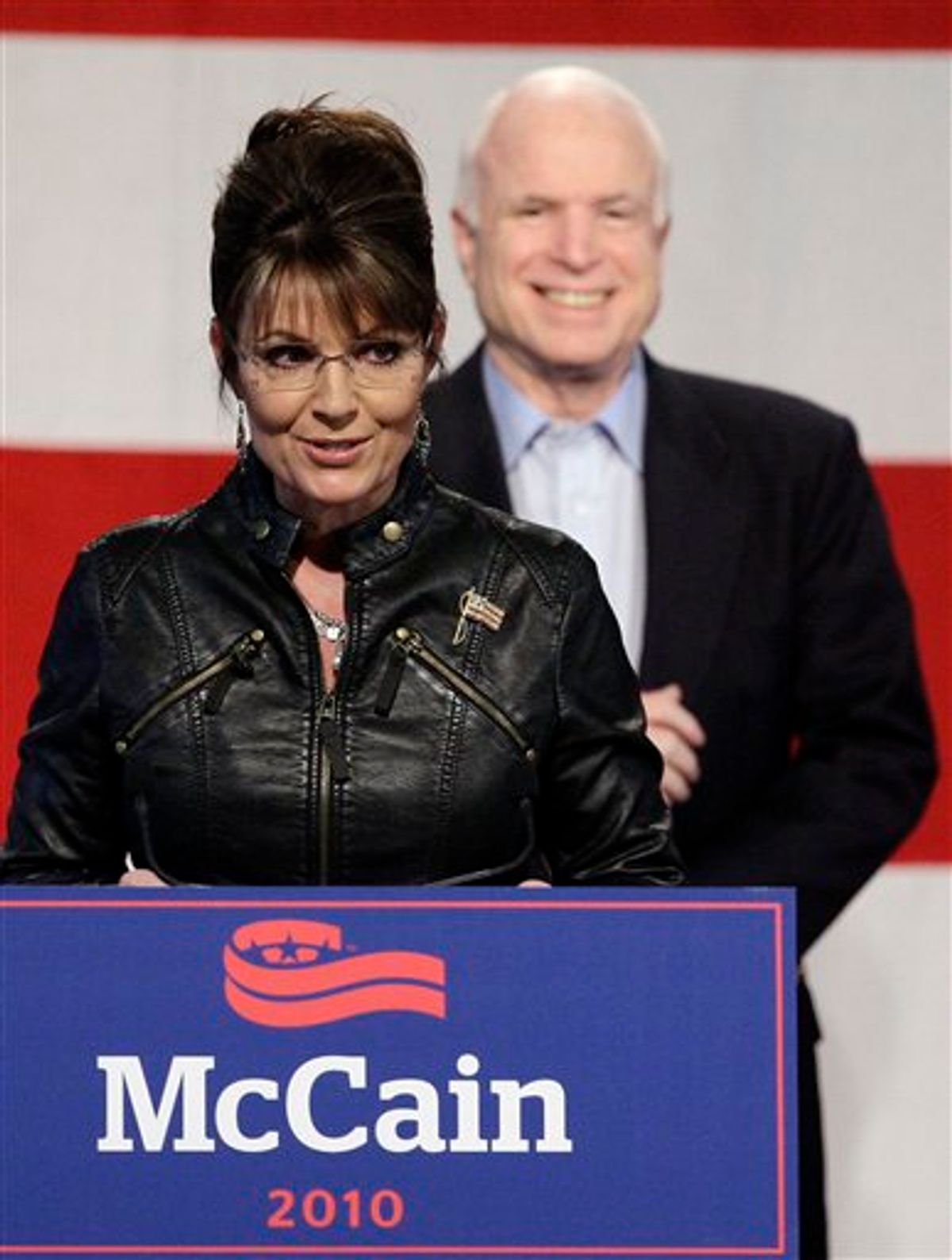 FILE - In this Friday, March 26, 2010 file photo, Sarah Palin, left, talks at a campaign rally for Sen. John McCain, back, at the Pima County Fairgrounds in Tucson, Ariz. Sarah Palin and thousands of tea party activists plan to descend on Sen. Harry Reid's hometown in the Nevada desert Saturday to call for the ouster of Democrats who supported the health care overhaul. (AP Photo/Ross D. Franklin, File) (AP)
--

So far, J.D. Hayworth's campaign to beat Sen. John McCain for the Republican nomination for McCain's seat in Arizona is looking like little more than a nuisance.

A new Research 2000 poll sponsored by Daily Kos, out Friday, showed McCain beating Hayworth easily, 52-37. Meanwhile, McCain ended the first quarter of 2010 with $4.5 million in the bank, after raising more than $2.2 million this year so far. Hayworth announced that he raised more than $1 million, but didn't say exactly how much. (And one of his top advisors, Arizona public relations mogul Jason Rose, recently quit because Hayworth couldn't, or wouldn't, give him a paying contract to keep working on the campaign.)

McCain is taking the race deadly seriously, running all over Arizona in an effort not to let Hayworth carve out much space to his right. His campaign aides push back against the slightest provocation from Hayworth with overwhelming force. And of course, Sarah Palin -- who he launched from Alaska to global superstardom in 2008 -- came through to rally the faithful for him last weekend. True, the state's Republicans are rabidly conservative, and some of them have never liked McCain; his push a few years ago for immigration reform hurt him among some segments of the GOP base. Hayworth has had some luck raising money from tea party groups outside Arizona who think McCain is an apostate.

But there's only been a couple of public polls that ever made it seem like the race would be close, both by the same company, Rasmussen Reports. The Daily Kos survey certainly doesn't give that impression. If Hayworth did somehow pull off the upset, Democrats might have a chance of taking the seat, the poll showed. But national Democrats are barely paying attention to Arizona (except to direct attention to the GOP primary). And chances are McCain will win both the primary and the general election handily, for a fifth term in the Senate.