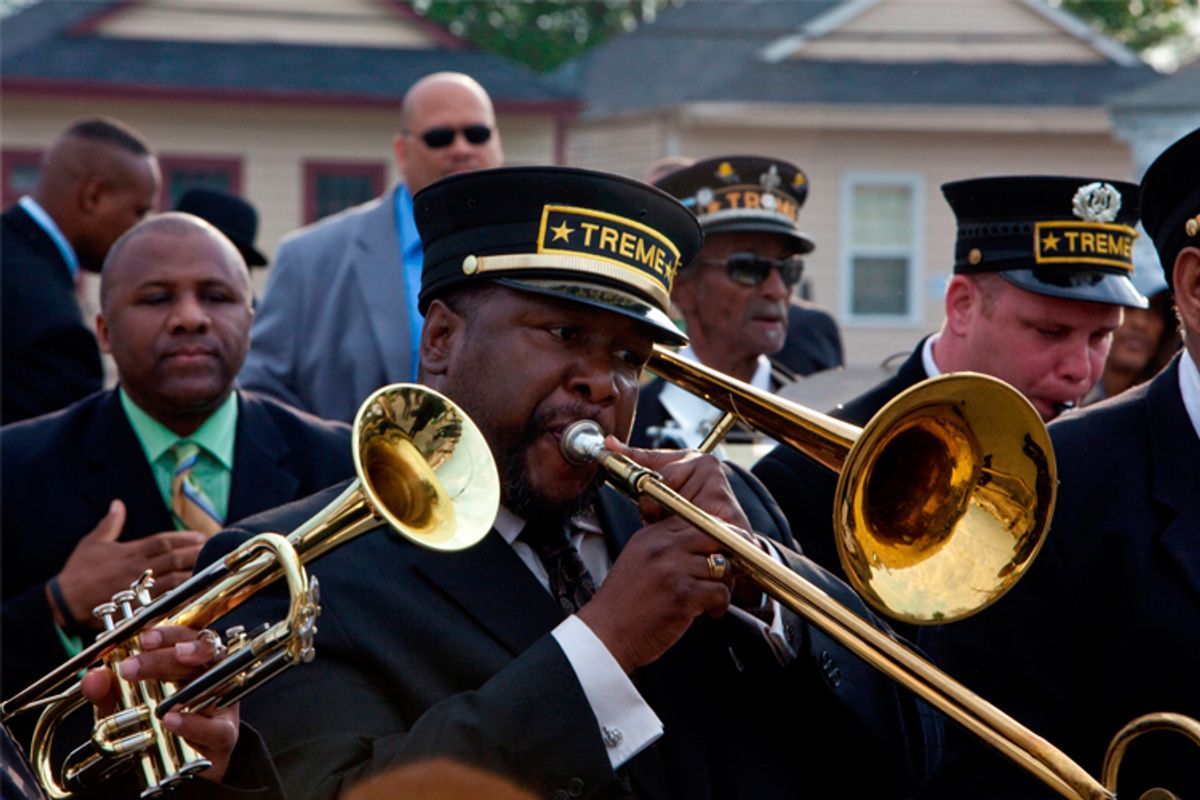 Oh, New Orleans. For most Americans you're nothing but a Mardi Gras road trip or a drunk weekend at the Jazz Festival or a pleasant stop for Bloody Marys and étouffée on a cross-country tour. Even though we might have read a few Anne Rice novels or enjoyed Dr. John singing "Iko Iko" at Tipitina's or spent several weeks wandering your Spanish-moss-draped streets, most of us don't really know you that well, not really.

Then along comes David Simon to bring the joys and sorrows of New Orleans alive for us, once and for all. In their new HBO drama "Treme" (premieres 10 p.m. Sunday, April 11), Simon and co-creator Eric Overmyer offer up such an intimate portrait of this strange, soulful American city that watching it makes you feel as if you're there, mopping your brow over a cold beer in a dark corner bar, taking in a jazz band at a club, tapping your foot along with a parade on its streets. Suddenly, all the talk of the uniqueness of New Orleans culture, the passionate embrace of its music, the struggle to revive the Lower Ninth Ward and bring its natives back home in the wake of Hurricane Katrina, all of it comes together and you can feel the heartbreak of this city, from the second-line parade that opens the first 80-minute episode to the slow funeral procession that ends it.

"Treme" epitomizes the sort of great storytelling we all thirst for on TV but rarely find. We meet characters briefly but want to know more about them. There's Janette (Kim Dickens), a chef who's struggling to keep her restaurant open in the wake of Katrina; Antoine (Wendell Pierce, Bunk from "The Wire"), a trombone player who's living hand to mouth, taking gigs just to pay for the cab that brought him across town; Davis (Steve Zahn), an idealistic radio DJ who balances ambition and fantasy with an underlying hunger for sticking it to the man; Albert (Clarke Peters), a musician who returns to New Orleans alone despite his son and daughter's urging him to move on. ("Just wait. When the insurance settles ..." Albert tells them, but we know how that's likely to turn out.)

These characters may sound familiar on the page, but they're strikingly original in the midst of the chattering, buzzing realism of "Treme." Each rambling moment of easy talk between these natives, each quiet pause of reflection on how their lives have been frayed or broken by the flood, adds up to a visceral experience of their disappointments and hopes. Simon and Overmyer unveil each character's path slowly, treating us to fragments of their lives that feel authentic, then weaving these threads into a cohesive whole that has an emotional impact beyond the sum of its parts.

"How's your house?" Janette's sous chef Jacques (Ntare Mwine) asks her. "Don't ask me about my fucking house," she replies. We can only imagine, and we're left to imagine, until the story winds back around to her. In the meantime, here's legendary trumpet player Kermit Ruffins playing to a packed crowd at a club; here's Albert sweeping up an abandoned bar in the middle of the night; here's Creighton (John Goodman), an English professor, raging to a camera crew about the unthinkable negligence of the U.S. government; here's Creighton's lawyer wife, Toni (Melissa Leo), investigating the disappearance of a man in police custody after the storm hit; here's Davis, lamenting that his boss at the radio station would expect him to air "Iko Iko" and other overplayed New Orleans greatest hits during the station's pledge drive.

These are characters who can't fix what's broken, but who still keep struggling for redemption or salvation or justice or just a little peace of mind:

"I married a goddamn musician. Ain't no way to make that shit right," says Ladonna (Khandi Alexander) of Antoine, her ex.

"This is not a natural disaster, this is a man-made fucking catastrophe of epic proportions!" shouts Creighton to anyone who'll listen.

"Play for that money, boys. Play for it," Antoine tells his fellow horn players right before they put their instruments to their lips.

"Treme" concerns itself with survival -- of a culture, a city, of downtrodden individuals -- but it also dares to explore the highs and lows of a passionate life. The series captures the romance of those fleeting moments when your whole existence rests on a few staccato notes, tripping out across a crowded room, but also digs into the dark times when you can't afford to pay your utility bill or buy a sandwich for lunch. This fragile balance, walking the line between creative rapture and destitution, not only personifies the artist's life, but reflects the at once ethereal and impoverished nature of New Orleans itself. Even in a few of the clunkier scenes, where Creighton's daughter laments the unbearable oppression of Catholic School or Davis sticks it to the man by stealing his CDs back from a closed-down Tower Records, some struggle to transcend the ordinary can be found.

And if the residents of New Orleans, from the very wealthy to the very poor, have something in common, it may be this shared drive to achieve something richer and more satisfying than the average life. Likewise, Simon and Overmyer's characters want to shrug off the rules of the straight world and follow their bliss wherever it leads, whether to the jam session or the poorhouse, if that's what it takes. In fact, Davis, Zahn's utterly convincing slacker DJ, may be the most ambitious of the lot, since ambition for the rest of these characters means doing something that feels right, that feels worthwhile. When Davis tries to get Kermit Ruffins to introduce himself to Elvis Costello (who came to hear him play) and Kermit shrugs it off, Davis is incredulous.

Davis: You're just standing there and telling me that all you want to do is get high, play some trumpet and barbecue in New Orleans your whole damn life?"

But nothing feels sad about Kermit's satisfaction with the gifts he's been given. That spirit pervades "Treme" and reflects some rare, essential quality shared by its characters, no matter what kind of dire situation they're in or how bitter they might be about their circumstances at times.

As you'd expect from David Simon, "Treme" is big and rambling and ambitious, but not every single scene is pure genius. As with any attempt to capture such a wide range of experiences, particularly one that sometimes features non-actors, there are one or two awkward scenes in each episode. Nonetheless, Simon's almost experimental willingness to throw everything but the kitchen sink into his dramatic gumbo, when taken together with the romantically ramshackle setting, the unmatchable cast, the infectious music, conspire to make this epic tale feel intimate and humble. Most of all, the scenes where musicians play songs together -- and people gather, dancing through the dusty streets unself-consciously -- give this snapshot of New Orleans such immediacy that when it ends and the credits roll, you can hardly believe that you don't live there.

"Treme" is a true gift, a way to finally appreciate and embrace one of our most beloved but neglected cities. Sure, we're just a bunch of outsiders, but this drama has captured our hearts and now we're in love -- silly, awestruck, enchanted, sobbing, swooning love. "Treme" will do it to you, too. Just you wait.