"In Pursuit of Silence": How noise really is killing us

From noisy Starbucks to shrill tea party protests, America is getting louder -- and we're paying the price 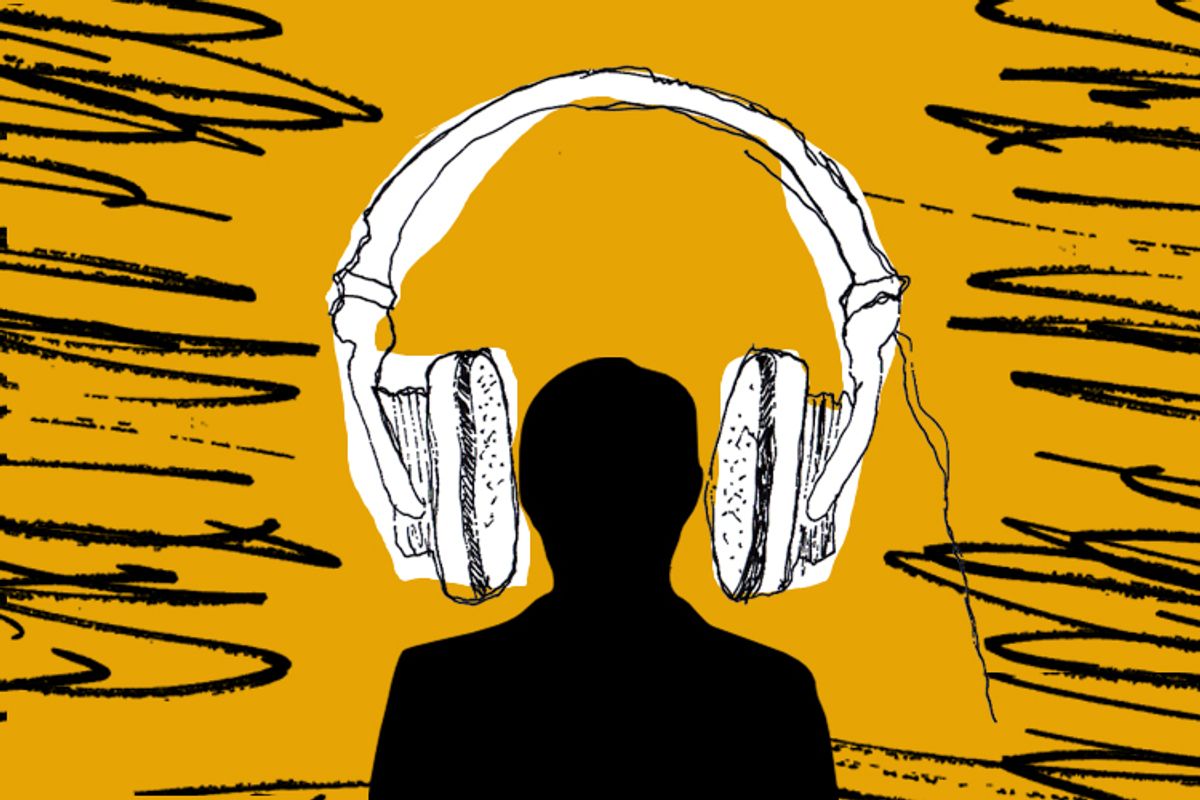 For most Americans, silence is hard to find these days. Traffic and airplane noise fill most major cities. Cellphone conversations have taken over the parks and sidewalks, buzzing electronics have invaded our homes, and each store has its own carefully shaped "sonic environment."

Most of us accept these noises as a normal byproduct of our gadget-obsessed times, but in his new book, "In Pursuit of Silence: Listening for Meaning in a World of Noise," George Prochnik argues that this barrage of noise is more than just a nuisance; it poses a real threat to our cardiovascular system and mental health, our ability to concentrate, and, perhaps most dangerous of all, it turns our political discourse into a shrill barrage.

A self-described lover of silence, Prochnik attends "boom car" competitions in Florida -- where owners compete to create the loudest sound from their audio system -- spends time with a shopping mall sound designer, and visits "soundscaping" projects in Europe, where designers use sound maps and hypermodern technology to decrease noise pollution. In the book's most fascinating moment, he looks at the way the peculiar pitch and volume of Hitler's voice may have seduced Germans into following his ideas.

Salon spoke to Prochnik over the phone about the younger generation's passion for noise, the torture of mall music, and why Americans are so much louder than the rest of the world.

Why do you love silence so much?

I just always had a natural affinity for silence, but I found myself increasingly frustrated living in New York. When friends would complain about life in New York, noise invariably ranked high on the list, but these were the same people who would go home and turn on the TV or plug in an iPod the minute they walk into the room. I felt we couldn't begin to unravel how we got to this point, with this world of noise, without better acknowledging what the appeal is.

You live in New York. Do you think life in this city is getting louder?

If you were to go to many cities in the 19th century, in particular during the Industrial Revolution, life would have been louder than what we have in New York. But I think the noise we suffer from today is more incessant. We have a different set of issues -- nighttime noise and air traffic being some of the most obvious culprits -- but in the 19th century, even people from the working class often lived in situations where it was easier to find an actual quiet space or a space where the sound of civilization was mixed with some kinds of natural sounds. It's important to remember that not all noises are created equal, and many surveys have demonstrated that people's reactions to noise vary wildly depending on whether they're natural or mechanical. Even at loud volumes sounds like birds singing and waterfalls are soothing.

Is this noise really hurting us? Haven't we just gotten used to it?

Noise wreaks havoc on all different parts of our bodies. The heart rate accelerates. We get vasoconstriction. It's been shown that the elevated blood pressure from nighttime noise continues all through the day. Even if we're not fully aroused by noise, sleep is fragmented. Loss of sleep is tied to all kinds of immune and heart problems, and a real laundry list of ailments. The really scary thing is even if we do habituate mentally to noise, that doesn't change what's happening to our bodies.

One problem we have in this culture is the idea of noise sensitivity associated with weakness or preciousness or a kind of fuddy-duddy crankiness. There are these pejorative associations. Culturally and for commercial reasons noise is viewed as a part of our pursuit of happiness -- our drive to have fun.

I think that ties into the American emphasis on individualism -- like it's a right to play our music as loud as possible. Traveling outside the United States, I've also noticed that Americans do tend to be louder, in general, than most people from other countries.

When it comes to tourists, there are the invariable clichés about the loud American. We just do speak more loudly in public places. An Austrian friend of mine went to a party in New York recently -- a small party of four or five people -- and he felt that people were trying to speak at the top of their lungs as a way of asserting their identity, whereas he said in Austria you'd have 15 people in the same size room speaking as silently as possible.

I think individuality is key. We do really have this profound sense of the right to our happiness. Noise is a bigger issue than the danger to our cardiovascular system. It's something that extends to all kinds of problems in American culture. There's a line I cite early on, from Felix Frankfurter, celebrating the idea that the authors of the Constitution had the street outside of Independence Hall covered with earth so their deliberations wouldn't be disturbed by traffic noise. Think about that as a contrast to the noise that comes out of Capitol Hill these days. These days, it's a reactive as opposed to deliberative process.

If you think about the debate over healthcare, for example, political discourse in American does seem to be getting a lot louder.

Speaking of totalitarianism, you write about the peculiar impact of Hitler's voice in the book. Was there really something unique about it that predisposed people to follow him?

Leni Riefenstahl described the effect of his voice as conjuring an apocalyptic vision. In the recording, you can listen to the real shifts in the frequency spectrum of his voice. He managed to change pitch in a very intentional concentrated way. He would rise, go deep down and get very raspy. There's an interesting guy at Kenyon College, named Andy Niemiec, who is looking at the ways that changes in harmony intervals may hit us at a particular vulnerable point in the auditory cortex. He and others are looking at this notion that everything has a fundamental frequency. Hitler's voice may have intentionally gone against its natural resonance to produce some of these emotional effects on its audience.

You spent time in a Texas shopping mall with a woman who creates sound environments for shoppers. Why are stores so loud these days?

If you're going into a store that's trying to appeal to younger people, with the possible exception of some Apple stores, you're going to get a lot of amplitude. There have been all sorts of studies that have been looking at what music speed and volume do to the time people spend in the stores, and weirdly, most of the studies find you can turn it up almost indefinitely without turning people away. The noise acts as a magnet.

One of the things that I found scary was how much thought is put into making these sonic store environments. Starbucks was one of the first to do this -- to be sonically consistent. They put you into a cone of brand identity, with certain sets of associations they've focus-grouped a million times, to create a sense of rebellion, melancholy, or whatever. We are being very comprehensively manipulated.

Do you think that the younger generation is just less accustomed to silence?

I certainly think that younger people have a much more difficult time escaping noise than people did not so very long ago. I think the environment is oversaturated with stimulation in a way that's quite recent. If you look at the changes in electronic entertainment, a lot of homes have computer games and the TV on simultaneously. There's less and less of an experience of silence and there's maybe a generational difference.

I ended up speaking with a number of young people from one fairly troubled area in New York, and it came across that they didn't know what silence was like. It began to seem callous of anti-noise activists to tell these people to be quiet when they've had no positive experience of silence. We have to make a much more concerted effort as a society to not just position silence as this necessary inward journey but to make quiet spaces democratically accessible in disadvantaged neighborhoods.

I recently spoke with people involved in prisoners' rights issues, and people in jail, particularly in mid- and low-security facilities, live in huge dorm-style prisons where there is never a break from electronic buzzing or loudspeaker announcements or other noise. I can't help but think this is going to be jacking up aggression levels.

I ride the subway to work every day, and I often turn up the music on my iPod just to drown out the noise from the subway. I find it exasperating. It's like I'm forced to choose between two different kinds of noise.

There's a reason people are turning their iPod volume too high. People are responding to several generations of mounting infrastructure noise. We are so loud in part because we have to create our own personal noise so that we don't feel like we're being held hostage to the grind and clash of the environment. I went to Florida, where these people were using their cars to blast super-loud music. But the places where these people live is horrifically noisy. When you're dealing with that kind of environment, I can really see the temptation to blast something that at least you like.

These days it's also so easy to fill in any silence. You just click a button on your iPod, or on YouTube, and you've got music or noise.

I was asking my eldest at one point what he thought about his generation relative to mine. He said: "We're the most distracted generation in history. We all seem to have attention deficit of some degree." Maybe it's that we've become so accustomed to noise that it's an addiction -- it's a 45-second hit of distraction -- we crave noise as a way to keep from feeling like we're drowning in information and stimulus.

I saw a study this past week about our problems multitasking. It found that when, for example, you're reading a book and a fire truck goes by, the brain is so overwhelmed by the external stimuli that it can't link up with the goal-directed activity [reading the book]. You're incapable of doing it for a considerable time afterwards. So think of the way we're always being blinded by sonic and visual surprises, and the implications for deliberative thought are scary.

Realistically, though, is there anything we can actually do about this noise?

I saw things in London and Sweden and Denmark, where people are peeling back some of the layers of noise that have accrued and exposing people again to some of the iconic sounds, like church bells or wind rustling. There have been interesting studies about how, even if a neighborhood has loud road traffic, you can introduce natural noise, block sounds, or reflect sounds and people will perceive noise to be lower. You can create enclosed areas in which you plant with specific kinds of foliage that are sound-absorbing and do interesting things when wind passes through them, and when people are looking at images of nature or soothing imagery their sense of auditory noise goes down by a number of decibels. You can create these kinds of spaces at much lower cost than reducing the noise in SoHo by three decibels.