After being trapped for in a flooded mine for a week, dozens of Chinese miners are pulled out alive 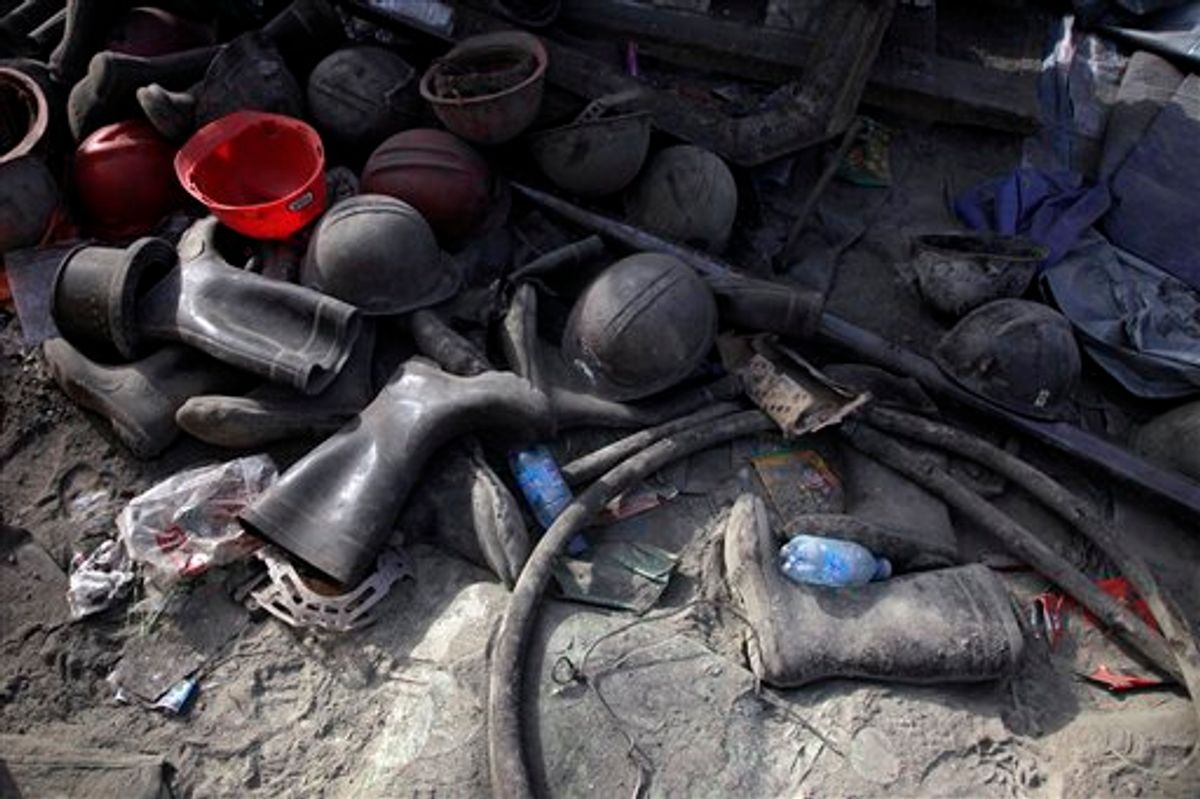 Helmets and boots pile up in the dust outside the shaft to the Wangjialing Coal Mine in Xiangning county in north China's Shanxi province, Sunday, April 4, 2010. Search and rescue continue almost a week after water flooded a mine, trapping 153 miners. (AP Photo/Ng Han Guan) (AP)
--

More than 100 Chinese miners were pulled out alive Monday after being trapped for over a week in a flooded coal mine, where some ate sawdust and strapped themselves to the shafts' walls with their belts to avoid drowning while they slept.

Rescued miners wrapped in blankets, some with their light-sensitive eyes covered but their feet bare, were hurried to waiting ambulances that sped wailing to nearby hospitals. One clapped on his stretcher and reached out his blackened hands to grasp those of rescuers on either side.

Rescuers in tears hugged each other at the scene, which was broadcast live on national television. The sudden surge in rescues was a rare piece of good news for China's mining industry, the deadliest in the world. A rescue spokesman said 115 survivors had been pulled out as of 4:30 p.m. local time (0830 GMT; 4:30 a.m. EDT).

"A miracle has finally happened," Liu Dezheng told reporters Monday morning, after the first nine miners were taken out shortly after midnight. "We believe that more miracles will happen."

Of the 153 initially trapped, there are still 38 miners in the shaft. Rescuers expressed confidence Monday they could be saved but did not say whether there had been any contact with them.

Rescuers have been pumping water out of the flooded mine since last Sunday, when workers digging a tunnel broke into an old shaft filled with water. The first signs of life from underground came Friday, when tapping could be heard coming up the pipes. Divers first headed into the tunnels over the weekend but found high, murky water and emerged empty-handed.

As the water level continued to drop, rescuers with rubber rafts squeezed through the narrow, low-ceilinged passages late Sunday and pulled out the first nine survivors just after midnight. Eleven hours later, the large wave of rescues began.

The miners spent eight days underground and some were soaked through. Some had hung from shaft walls by their belts for days to avoid falling into the water when asleep. Later, they climbed into a mining cart that floated by.

One miner described eating sawdust and tree bark and drinking the murky water, the leader of one of the rescue teams, Chen Yongsheng, told a news conference Monday afternoon.

As the rafts approached the first trapped miners, one of them asked, "Can you get me out of here?"

Liu Qiang, a medical officer involved in the rescue, said the survivors had hypothermia, severe dehydration and skin infections from being in the water so long. Some also were in shock and had low blood pressure.

"This is probably one of the most amazing rescues in the history of mining anywhere," said David Feickert, a coal mine safety adviser to the Chinese government.

Chen said two or three of the underground mine platforms had not yet been checked for survivors. Conditions remained complicated by high murky water.

Families of the survivors were thrilled. "He called and managed to say my sister's nickname, 'Xiaomi,' so we know it's really him and that he's alive," said Long Liming, who said he received a call around midday from his rescued brother-in-law Fu Ziyang.

A doctor then took the phone and said Fu had to rest, Long said. "He was trapped underground for so long, so he's very weak. But we are very relieved to know that he made it out safely."

Officials said most of the rescued miners were in stable condition, but state television said seven were in serious condition.

In a sign of government concerns over possible social unrest, family members of the trapped miners said they have been kept under close watch in hotels and are not allowed to leave unless accompanied by minders.

Rescuers then scrambled to understand the complicated situation underground and send down packages of glucose, milk and letters of encouragement. One read: "Dear fellow workers, the Party Central Committee, the State Council and the whole nation have been concerned for your safety all the time.... You must have confidence and hold on to the last!"

Some workers appeared to be trapped on upper platforms of the mine; their access to the entrance of the V-shaped shaft was blocked by an area swamped with water.

"The situation underground was a bit more complicated than we predicted," Luo Lin, the director of the State Administration for Work Safety, told state television.

It was unclear Monday how deep into the mine the rescued workers had been found.

"The miners in the lowest levels will be in the most extreme danger," Feickert said. "Just think of a tall building, with people on different floors, if that suddenly filled up with water."

China Central Television said one of the newly rescued workers still was holding his mining lamp.

China's coal mines are the world's deadliest. Accidents killed 2,631 coal miners in China last year, down from 6,995 deaths in 2002, the most dangerous year on record, according to the State Administration of Coal Mine Safety.