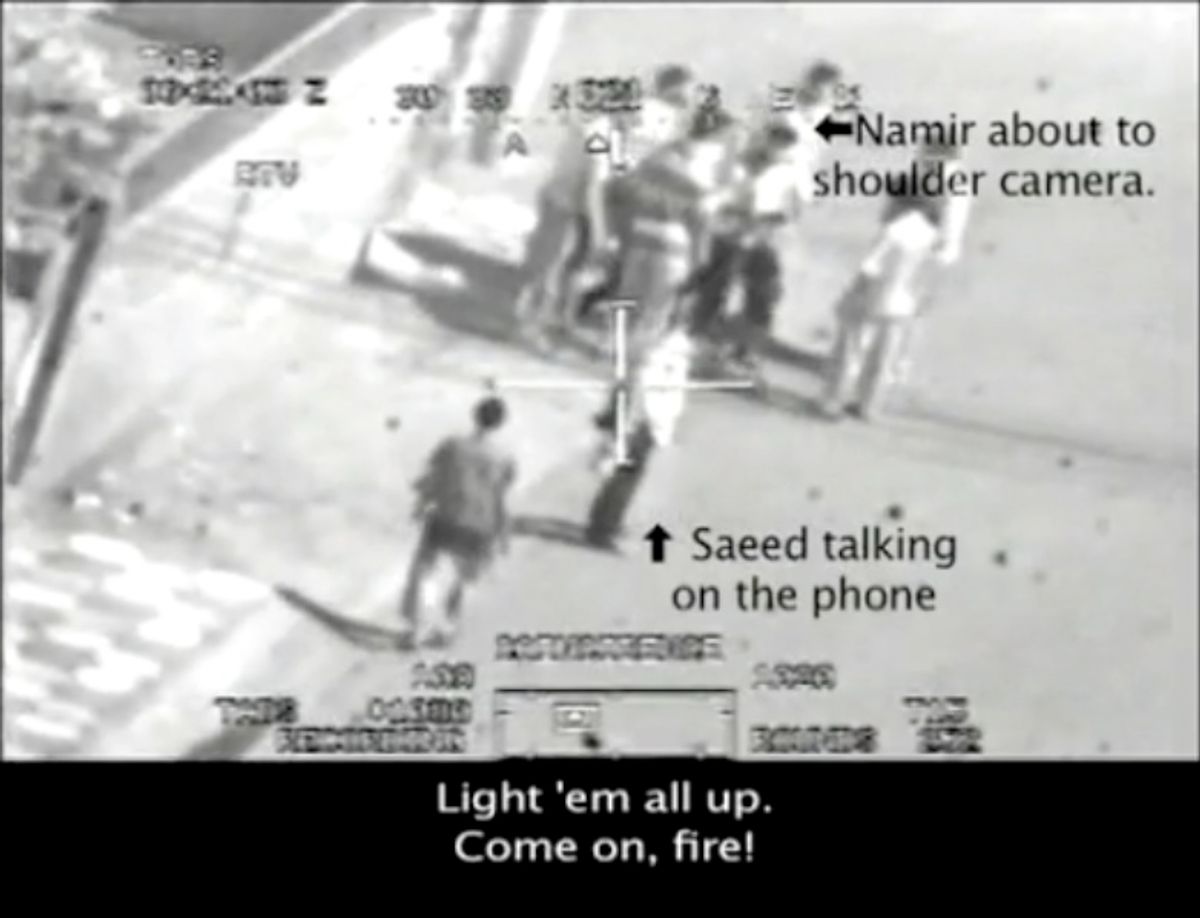 Previously classified footage of a July 2007 attack by U.S. Apache helicopters that killed a Reuters journalist and several other non-insurgents was published on WikiLeaks Monday afternoon.
--

A week ago, I wrote about the war being waged on WikiLeaks by the Pentagon and other governments and corporations around the world, and noted at the time -- as a result of my interview with editor Julian Assange -- that WikiLeaks had obtained classified videos that were highly incriminating of the Pentagon and was planning on releasing them shortly.  Earlier today, I wrote about the cover-up by the U.S. military in Afghanistan of the deaths of five civilians, the Pentagon's forced retraction of its story, and the way in which the U.S. media (as usual) mindlessly disseminated their original false claims.

Those two stories came together perfectly when WikiLeaks today released a video of the U.S. military, from an Apache helicopter, slaughtering civilians in Iraq in 2007 -- including a Reuters photojournalist and his driver -- and then killing and wounding several Iraqis who, minutes later, showed up at the scene to carry away the dead and wounded (including two of their children).  The video (posted below) is truly gruesome and difficult even for the most hardened person to watch, but it should be viewed by everyone with responsibility for what the U.S. has done in Iraq and Afghanistan (i.e., every American citizen). Reuters has been attempting for two years to obtain this video through a FOIA request, but has been met with stonewalling by the U.S. military.  As Dan Froomkin documents, the videotape demonstrates that military officials made outright false statements about what happened here and were clearly engaged in a cover-up:  exactly as is true for the Afghanistan incident I wrote about earlier today, which should be read in conjunction with this post.

I was on MSNBC earlier today -- along with WikiLeaks' Julian Assange, Iraq expert and (surge architect) Brett McGurck, and Lt. Col Anthony Shaffer -- to discuss this incident.  This discussion, led by Dylan Ratigan and posted below, was genuinely quite good.  My participation begins at the 10:30 mark, but the whole discussion is very worthwhile (I'll also be on Democracy Now, at 8:10 am EST, to discuss the Iraq and Afghanistan events, along with Assange and Jerome Starkey, the Times of London reporter who broke the Afghanistan story and whom I interviewed earlier today by podcast).

As The National put it:  "Wikileaks has probably produced more scoops in its short life than The Washington Post has in the past 30 years."  If they had not obtained and then posted this video, we would not know about what happened with this incident.  I wonder how WikiLeaks is able to break so many stories without publishing "beat sweeteners," spending tens of thousands of dollars to be seen at the White House Correspondents' Dinner, and currying favor with White House officials in exchange for access?

The video released by WikiLeaks is here:

UPDATE:  The important thing to keep in mind when watching this video, as well as reading about the Afghanistan massacre, is this:  they hate us for our Freedom!