My antidepressant gets harder to swallow

As studies shed doubt on certain psychiatric drugs, I wonder: Do I really need my little white pill? 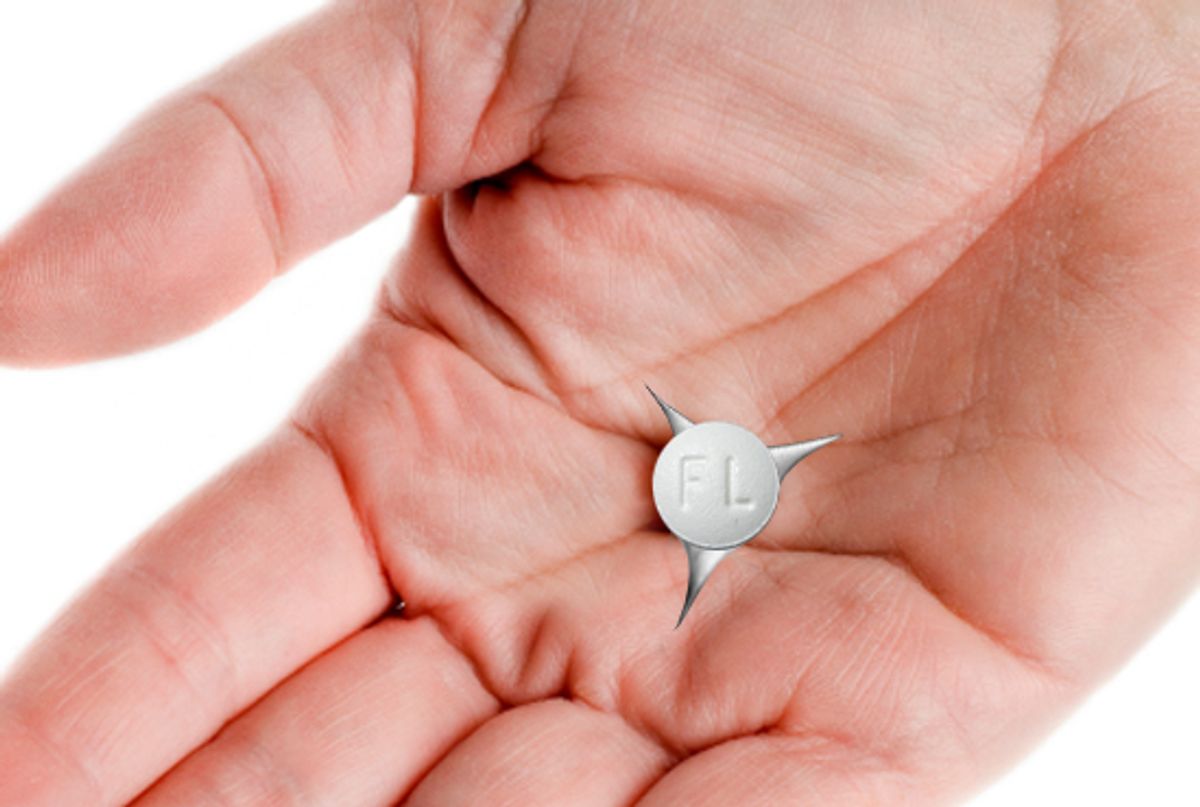 I take it every morning, right after I brush my teeth. A single white pill, with the letters F and L stamped on one side, the number 10 on the other. It's so small it nearly disappears into the folds of my palm. You could drop it in my orange juice or my breakfast cereal, and I'd swallow it without a hitch.

And, for the last three years, I have been swallowing my Lexapro -- and everything that comes along with it. And, apparently, I'm not alone.

Between 1996 and 2005, the number of Americans taking antidepressants doubled. According to the Centers for Disease Control, antidepressants are now the most commonly prescribed class of drugs in the U.S. -- ahead of drugs for cholesterol, blood pressure and asthma. Of the 2.4 billion drugs prescribed in 2005, 118 million were for depression. Whether the pills go by the name of Lexapro or Effexor or Prozac or Wellbutrin, we're downing them, to the tune of $9.6 billion a year, and we're doing it for a very good and simple reason. They're supposed to be making us better.

Which leaves a quite massive shoe waiting to drop. What if these costly, widely marketed, bewitchingly commonplace drugs really aren't fixing our brains?

The implications are troubling, and not just for the pharmaceutical industry. In a study published last January by the Journal of the American Medical Association, scientists conducting a meta-analysis of existing research found that antidepressants were unquestionably "useful in cases of severe depression" but frankly not much help for the rest of us. "The magnitude of benefit of antidepressant medication compared with placebo," the study's authors concluded, "may be minimal or nonexistent, on average, in patients with mild or moderate symptoms."

In other words, antidepressants work, but only because we believe they're working. If we're not seriously depressed and we're taking a tricyclic or a serotonin reuptake inhibitor or a norepinephrine booster, we'd fare about as well with a sugar pill. Which means that antidepressants are, to borrow the phraseology of Newsweek writer Sharon Begley, "basically expensive Tic Tacs."

And so, like millions of Americans, I'm left with the problem of it: that little white pill that travels down my gullet every morning. What is it really doing down there -- up there? What if it's not doing anything? Is there any good empirical unassailable reason that I should be swallowing it day after day after day? If I stop believing in it, will it stop working?

More than half a century has passed since the first antidepressants were prescribed, but it's fair to say that the opposition to them coalesced in the 1990s, with the explosive sales growth of Prozac. As critics like David Healy and Ronald W. Dworkin warned that Big Pharma was medicalizing sadness for profit, the widespread usage of ironic terms like "happy pills" conjured up visions of smiling zombies wandering through sinister dreamscapes. Eric G. Wilson, in his overwrought "Against Happiness," actually envisioned a day when antidepressants would "destroy dejection completely" and "eradicate depression forever."

Looking back, we can see that both critics and advocates were working from the same premise: that these drugs change us in some fairly profound way. (Even pro-drug Peter Kramer, in his bestselling "Listening to Prozac," worried about the cost of making people "better than well.") But as researchers like Irving Kirsch and Guy Sapirstein are increasingly finding, the truth may shade more toward the comic end of the spectrum. Far from transforming us, antidepressants are leaving us pretty much as they found us. Emperors in gleaming new clothes.

The more I ponder my experience, the less surprised I am. I turned to medication because I couldn't stop crying in public places -- Starbucks was a popular spot -- or imagining my death. (Crucially, I never got around to planning it.) And because I realized that although I was meeting life's core requirements, I was not always exceeding them. And because, after a couple of years of sessions with an empathetic therapist, I came to believe that my wiring really had shorted out, that some form of grayer matter had fastened itself to my brain and was hard at work, siphoning away my joy.

I remember watching the camcorder footage of my son's first birthday party and being shocked by the sight of myself, staring back at the camera with sad eyes. Depression had always been a sporadic companion, but in my 43rd year, it began to take up permanent residence. I felt like I was walking around on rotting floorboards. I cried. I lost my temper on the flimsiest of pretexts. I saw myself dead.

At which point medication seemed like a reasonable alternative. Before another week had passed, I had secured a low-dosage prescription for Lexapro, prescribed not by my therapist but by my primary-care physician. (Even that's not quite true. It was the doctor who was taking my doctor's patients while she was on vacation.)

"Who's going to monitor this drug?" my partner asked.

When it came to Lexapro, all my responses had the same interrogative lilt. If someone asked me how I was feeling, I'd say, "Better, I guess?" When asked if I would recommend Lexapro to others, I'd say: "Maybe kind of?"

This was the most surprising part of the whole experience: that the transformation or malformation I had expected to feel never quite arrived, that in the course of ramping up my serotonin levels, I should remain so freakishly myself.

It is, in fact, one of the amusing side effects of living in the age of pharmaceuticals that you can always compare your lack of progress with those nearest and dearest to you—in this case, my mother. Not a lunch goes by that one of us doesn't say to the other:

Agnosticism, I've found, is a common refrain among my medicated friends. We're feeling OK, thanks. Is it the pill? Natural cycles? A good week at work? The fact that the sun is shining? Not always apparent. The only thing we're really clear on, honestly, is our side effects. Nausea, nightmares, hypomania, agitation, headaches, decreased sex drive, decreased sex performance … the list is exquisite in its variation. My first two nights on Lexapro, I lay for hours on the precipice of unconsciousness, unable to take the last plunge. To fall asleep, I had to get a prescription for Ambien, which I then spent another week weaning myself off. To this day, the prospect of sleep holds a mild terror for me that it never did before.

Oddly enough, the side effects are often the pills' best advocates. If we're feeling that crappy, we figure something of great moment is happening inside us. What's harder to accept is the alternative explanation -- that, when it comes to depression, we're still wandering in the dark. As Charles Barber, author of "Comfortably Numb," argues, scientists don't really know how antidepressants work. "They change the brain chemistry, but the infinite spiral of what they do from there is very unclear."

So if you don't know how something works, and you can no longer credibly claim it does work (even some industry spokesmen are beginning to qualify their claims), you're not left with much of a fallback position. The placebo effect is real -- the body actually does heal itself when it believes it is being healed -- but it is founded on faith, and in the wake of the JAMA study, it's becoming harder and harder to maintain that faith except through a rather larger act of denial.

Of course, even the most ardent critics of antidepressants caution strongly against sudden withdrawal. (Those side effects suck, too.) And few scientists will deny that drugs help people with severe unipolar depression. But what of the rest of us? Should we find some way to make ourselves believe in our little white pills again? Or should we find other things to believe in? Should we, in fact, begin to rethink our relationships with our brains?

I don't bring much in the way of ideology to these questions. I've always felt that the rise of Prozac and its ilk at least had the salutary effect of removing the stigma attached to depression. Reconfigured as a chemical condition, it could now be owned and acknowledged and treated. But by translating it from the personal to the pharmacological, we may have left people even less empowered to combat it.

It's bracing to see how depression is treated in other countries, where the relationship between drug manufacturers and physicians isn't quite so hand-in-glove. Great Britain's National Institute for Health and Clinical Excellence, for example, recommends that, before taking antidepressants, people with mild or moderate depression should undergo nine to 12 weeks of guided self-help, nine to 12 weeks of cognitive behavioral therapy, and 10 to 14 weeks of exercise classes. They should, in short, work on themselves before they can be worked upon.

Unfortunately, as Barber notes, that's work, and not always pleasant. If we are to be honest with ourselves, we should admit that the drug companies aren't the only ones who want that pill. We want it, too. If every last antidepressant were to vanish from the market today and a new one were to appear tomorrow, promising greater benefits than before, which of us would not line up? There is, after all, a strength in numbers, whereas grappling with yourself -- your self -- is a lonely business.

But it is, finally, a necessary one. The little white pill sits in my palm. In the glare of the bathroom light, I give it a good hard searching look. And then once more I clap it in my mouth and swallow it down.

I will say only this: I no longer count on Lexapro to make me well. Which is to say I no longer fret if I miss a day or two, I no longer rush to the drug store to get my refills, and I place far more importance on getting my life in order: regulating my alcohol consumption, getting a decent night's sleep, exercising (I'm not the only depressive who's become an amateur triathlete) and, corny as it sounds, pausing at intervals to ponder my blessings. And also appreciating the ways in which my brain and body regulate their own climate through such time-honored techniques as the crying jag. Which is no less effective for happening in the middle of a busy Starbucks.

Three years and however many dollars later, can I honestly say Lexapro has made me a happier person? No. Has it usefully complicated my thinking? Maybe. In my pre-pill days, I regarded happiness as a form of grace, descending upon me whether or not I was worthy of it. Now I think of it as something that, however elusive, is there to be sought. Swallowing a pill every morning is not, in my mind, an act of obedience but a tiny spark of volition, a sign that I'm willing to find the light wherever it's hiding. My Lexapro may be no better than a Tic Tac, but it's a daily reminder that I won't take depression's shit lying down.