The director spins his whitewashed film as a triumph of cultural diversity. Here's why he's wrong 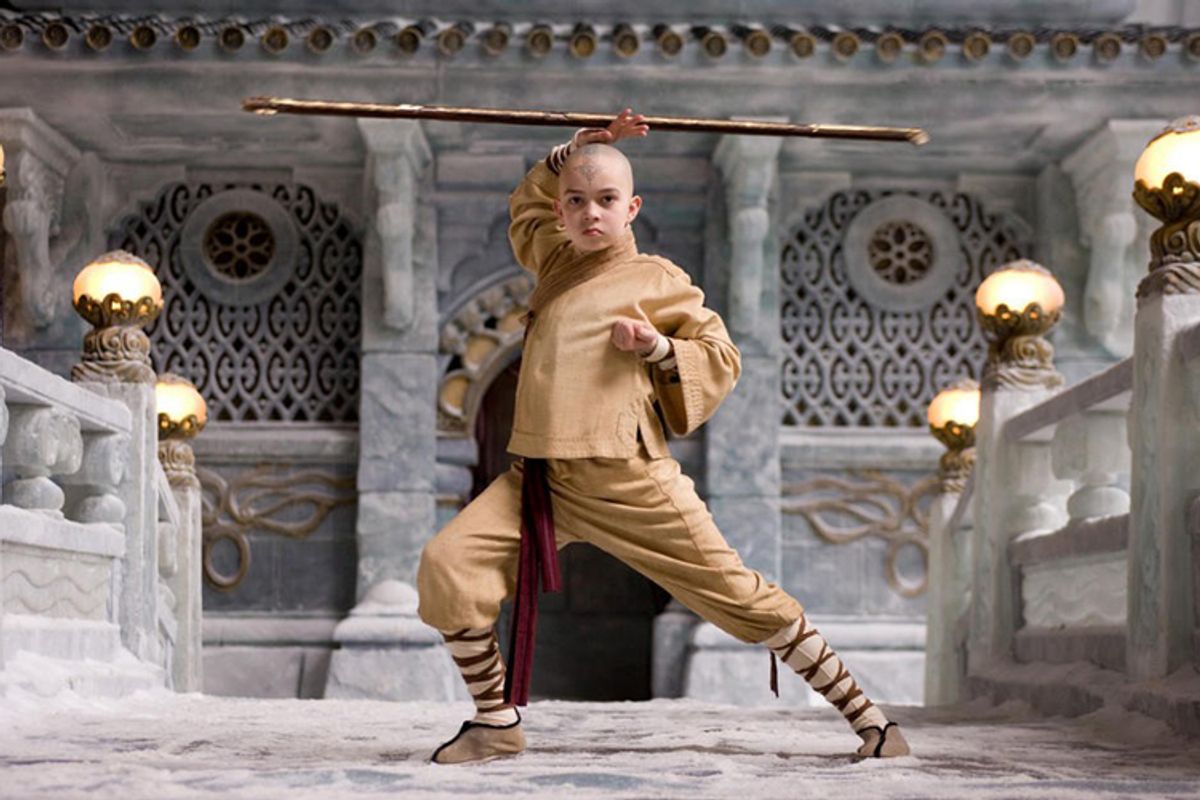 Noah Ringer in "The Last Airbender."
--

Poor M. Night Shyamalan. Apparently he's been caught off guard by the protests over white actors playing many of the lead roles in his movie "The Last Airbender." It's ironic, he told UGO movie blog writer Jordan Hoffman:

[I]t is the most culturally diverse tent-pole movie ever made. And I’m proud of it. It’s part of what drew me to the material, to see the faces of our whole world in this new world. And only time will assuage everyone and give them peace. Maybe [the protestors] didn’t see the faces that they wanted to see but, overall, it is more than they could have expected. We’re in the tent and it looks like the U.N. in there.

Last week, Shyamalan sat down for a breakfast interview with several film bloggers, journalists, and what Hoffman calls "three stoked webmasters from Airbender fan sites" in a love fest for the movie and its auteur. The live-action film, based on a Nickelodeon cartoon series, opens July 2.

There's plenty of room in the public forum for a sophisticated analysis of race and culture. Many writers have noted that race is a social construction, not a biological absolute, and to reduce all debates about difference to skin color is to miss everything else that influences the way others perceive us.

The problem comes when invocations of "culture" or "cultural diversity" — the new watchwords — end up erasing racial and cultural inequality. In this case, the casting practics of Hollywood, that maker of dreams, are on display.

It is ironic. There's no better illustration of the global melting pot than the anime-inspired Airbender franchise. The original series was created by two white Americans (Mike DiMartino and Bryan Konietzko), who cite Asian martial arts and Hayao Miyazaki as influences. Most of the cartooning was done in Korea. Now an Indian American is at the movie helm.

But as an update of "We Are the World," Shyamalan's vision begs the question of why white actors are playing three key roles. This includes Aang, the main character for which the movie is named.

Shyamalan's critics are not interested in the usual Hollywood multicultural mix—all those extras and bad guys who could be pulled from Los Angeles jury pools. Blogs like Racialicious are full of responses to him "spouting a load of BS," in the words of one commenter:

I don’t see how anyone who has ever taken the time to step outside of their own cultural box can look at [the Airbender cartoons] and see 'white'. The series is filled with cultural markers that are blatantly Asian in depiction, so when people go on about Aang being white (or even Sokka and Katara, who are obviously browner than everyone else…), I really have to question whether they’ve ever stepped outside or are they just so used to white appropriation that they see everyone as white...

We haven't reached post-racial nirvana yet. We may have a biracial president who identifies as African American, but a casual perusal of tea party websites should convince anyone that racism is not dead.

While Shyamalan says anime is racially "ambiguous" — it is indeed a cartoon realm in which characters often have big blue "power" eyes and pale skin — many fans would argue right back that these characters are culturally Asian (and, more specifically, East Asian). Back in 2005, the "Airbender" creators said in Animation Insider that they "wanted to base [their mythos] in Asian rather than European background."

I've written before about my own disappointment over "Airbender" heroes like Katara and Sokka getting white makeovers. My young son, a Vietnamese adoptee, deeply identifies with these cartoon characters.

What makes this all so complicated is that cultural affiliation is many-layered, even if you aren't an international adoptee. For example, there's Vietnamese culture (and the subcultures and dialects of Vietnam). There's mainstream American culture. And there's pan-Asian-American culture, which is marked by physical appearance more than a set of beliefs. That's just for starters.

Regardless, I know my son wants to be the hero in his favorite stories. Of course those fictional heroes don't always have to be Asian, though these days, they often are. He didn't like being stuck in the role of Yoda, as he was when playing "Star Wars" with white friends in kindergarten.

This should not be a big leap for Shyamalan. Women professionals from Laura Bush to Sonia Sotomayor have cited the importance of Nancy Drew as a role model. In fact, the "Airbender" cartoons are popular with many progressive moms because of the strong female characters.

So imagine you're an Asian American boy (your background may be Vietnamese or Chinese or Korean or Japanese, but the American part matters, too). On TV, you see a slang-talking teenage hero named Sokka with a black top-knot of hair and brown skin. Sokka throws a boomerang in battle, tells bad jokes, and gets to kiss the moon goddess. You see yourself.

In the movie, Sokka is played by Jackson Rathbone in an Eskimo parka.

I'm trying to give Shyamalan the benefit of the doubt. His "Last Airbender" does include at least one Indian actor in a lead role: Dev Patel as Prince Zuko (although this casting change came after the protests started). In some of the other online pieces spun from his breakfast interview, the director reflects at length about decisions he made in creating the various nations in this fantasy world. Shyamalan seems to have thought hard about why racial mixing, for example, might make sense in a culture of nomads like the Air Nation.

But his explanation, quoted by Hoffman of UGO, of why he's changed the pronunciation of character names from that of the original cartoons comes off as a defensive slap against his critics:

Now this is, for me, because, at the end of the day a South Indian guy directed the movie. It’s a personal thing. So 'Aang' is not [like Tang] but 'Aang' [like Tong.] It’s 'Ang Lee.' See, my first name is Manoj [as Man-oh-j] and everyone mispronounced it in school and butchered it as 'Man-ahhj.' So, this is coming from a specific place, from a multicultural appreciation.

He's the auteur, all right. He doesn't want to be roped into a boring paint-by-numbers franchise in which he's beholden to fans. I can see the pickle he's in, and his "multicultural appreciation" may pay off. But changing the pronunciation of names from a long-running TV show seems benighted. It's like focusing on your own little tree in a huge forest.

Fans have a culture, too. So why isn't there room for them in M. Night's "tent-pole movie," especially when their protests say a lot about our own changing but very real world?