The president may create another Guantanamo -- in Afghanistan. Here's why it could backfire on him in a big way 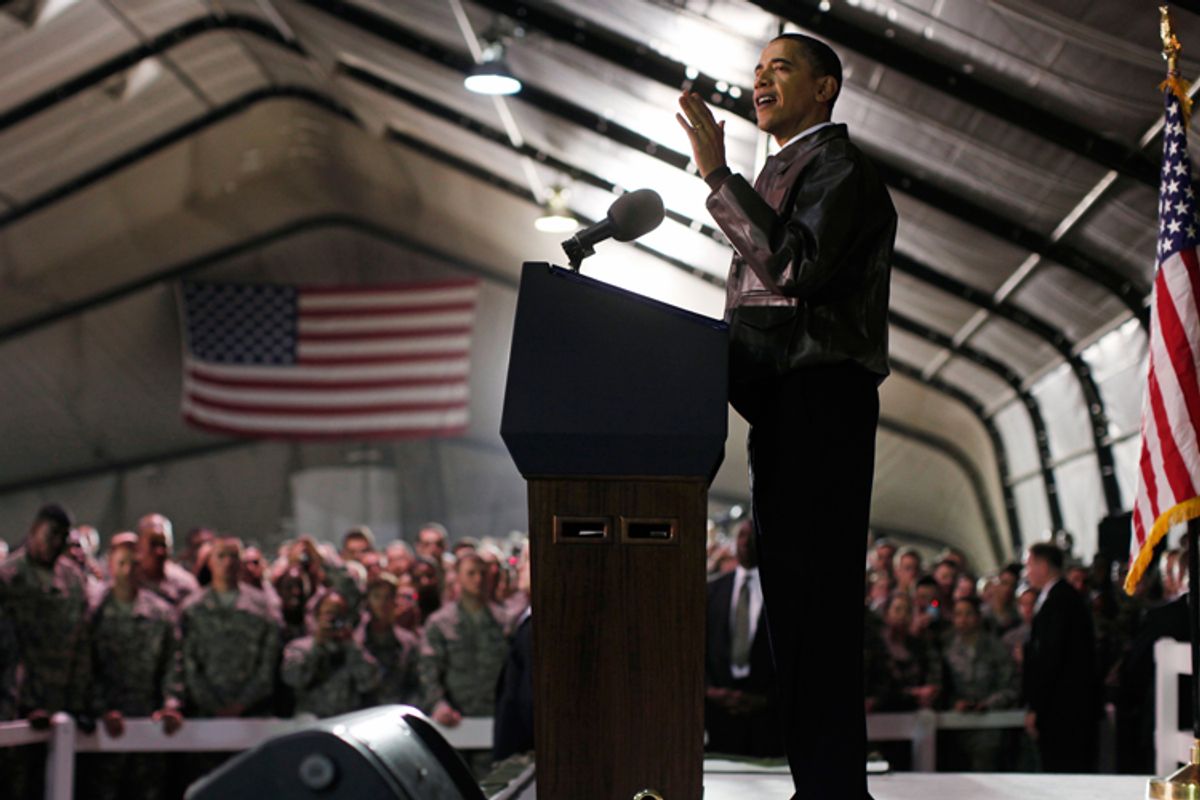 President Obama meets with troops at Bagram Air Base in Kabul on March 28.
--

President Obama, having promised to close the Guantánamo Bay detention facility, is now struggling to find a suitable alternative for housing suspected terrorists.

Reports are now emerging that the White House is considering making Bagram Air Base, the main U.S. detention facility in Afghanistan, the functional replacement for Guantánamo.

Understandably, this has provoked significant outcry from civil liberties advocates, who charge that any such move would be a conscious effort to evade the rule of law. But it might actually be a blessing in disguise, because if the administration does pursue this course it would set the stage for a long-overdue court ruling that could very well vest Bagram’s prisoners with the right to challenge their detention.

At issue is the precarious reach of the writ of habeas corpus -- the time-honored legal right to petition a court to ensure that the executive has sufficient cause to detain an individual. In 2008, the Supreme Court held in Boumediene v. Bush that Guantánamo detainees are entitled to habeas. As the Boumediene case resolved only whether habeas applies to detainees at Guantánamo -- and not other international post-9/11 American facilities -- it remains unclear whether foreign detainees at Bagram can invoke the habeas writ.

Indeed, this very question is at the heart of al Maqaleh v. Obama -- an ongoing legal battle between several current Bagram detainees and the Obama administration. Because these Bagram detainees have not yet been accorded the habeas right, there is concern that the administration’s proposal would place all prospective foreign terrorism suspects beyond the rule of law, without fundamental habeas protections.

In reality, though, this could actually open the door to the al Maqaleh court ultimately holding -- against the government -- that habeas does extend to foreign detainees in Bagram. In other words, in resolving an important policy question, the administration could seriously weaken its legal case.

In 2009, a federal district court issued an initial opinion in al Maqaleh. The court, guided by Boumediene, determined that habeas exists for foreign detainees in Bagram because "the United States appears to have near-total operational control at Bagram." Several factors support the court’s conclusion. For example, under the express terms of a lease agreement between Afghanistan and the United States, Afghanistan consigned the land and facilities at Bagram for the "exclusive, peaceable, undisturbed and uninterrupted" use by the United States. The lease expires only when the United States deems that "the premises are no longer required for its use."

The government has appealed, arguing that the district court got it wrong. The United States does not possess sufficient control over Bagram, according to the Obama administration, because the American presence in Bagram is "limited" in duration and because any American operational control over the base is "constrained" by considerations of Afghan sovereignty and by the fact that other coalition forces are able to use the facility.

A White House decision to house foreign detainees in Bagram would undermine these same positions. With respect to the length of the American presence, the continued and expanded use of a U.S. detention facility, for purposes on par with Guantánamo, would be difficult to square with claims that the United States will be in Bagram for a temporary, defined period of time. And by building a permanent structure within which to imprison detainees, the U.S. would only solidify the prospect of an indefinite American presence in Bagram.

It is true that the United States has indicated its interest in passing control of the Bagram facility to Afghanistan authorities. But an American decision to bring foreign terrorism suspects to Bagram would preclude this transfer of power. The U.S. would undoubtedly want to maintain control of a facility into which it will feed the "worst of the worst," rather than delegate this critical gate-keeping role to the beleaguered, unproven Afghan security forces.

The Supreme Court has made it clear that the government may not "game" the system -- that the habeas writ "cannot be contracted away" and that the administration can’t decide for itself "when and where [the Constitution’s] terms apply." For this reason, when the government posited that habeas proceedings cannot take place in Bagram because it is an "active theater of war," the district court responded by pointing out that it is the government that was responsible for bringing the detainees, captured outside of Afghanistan, to Bagram.

Justice Robert H. Jackson understood decades ago that, in wartime, it’s easy for the government to try to reduce basic liberties to a shadow. Should the administration settle on Bagram as the new Guantanamo, it will validate this principle. But take solace: it will have also sabotaged its case.

Dawinder S. Sidhu, an attorney whose practice focuses on individual rights in the national security context, is co-author of "Civil Rights in Wartime: The Post-9/11 Sikh Experience." He wrote an amicus brief on behalf of constitutional law scholars in the al Maqaleh case, at the appellate level, in support of the Bagram detainees. The views expressed herein are his own and do not necessarily reflect those of the signatories to the brief.

Dawinder S. Sidhu, an attorney whose practice focuses on individual rights in the national security context, is co-author of Civil Rights in Wartime: The Post-9/11 Sikh Experience. He wrote an amicus brief on behalf of constitutional law scholars in the al Maqaleh case, at the appellate level, in support of the Bagram detainees.