Thanks, Boss, for putting the romance (and politics) back into tabloid scandal 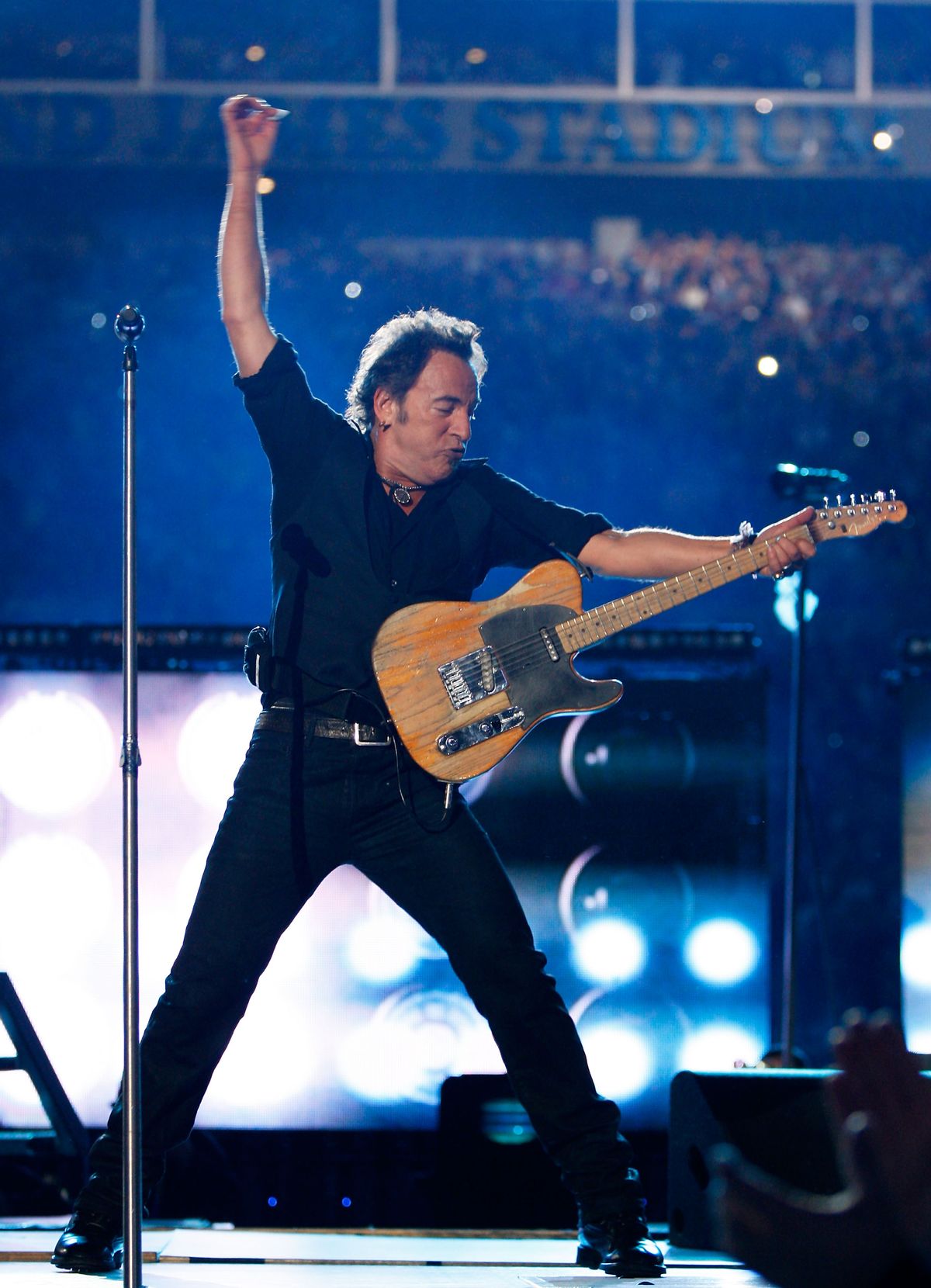 Musician Bruce Springsteen and the E Street Band perform at the Bridgestone halftime show during Super Bowl XLIII between the Arizona Cardinals and the Pittsburgh Steelers on February 1, 2009 at Raymond James Stadium in Tampa, Florida. (Jamie Squire)
--

It is a testament to the tawdry depths of recent celebrity scandals that I found myself strangely pleased this weekend to read about allegations that Bruce Springsteen, the celebrity for whom I feel the most regard, cheated on his wife Patti Scialfa, whom I also admire.

Yet, there I was, shaking my head with relief and amusement as I flipped through "Swing Steen," the New York Post's ingeniously headlined tale of Springsteen's reported dalliance five years ago with a woman from his hometown. I grinned as I read the story, not just because of the ample Boss puns ("Springsteen's 'Human Touch' made her melt;" "[T]he Jersey girl got lost in a ‘Tunnel of Love'"), but because after a year of John Edwards, Tiger Woods and Jesse James, even after the none-of-our-business-but-nonetheless-dispiriting splits of Susan Sarandon and Tim Robbins and Kate Winslet and Sam Mendes, the Springsteen infidelity feels like a clean mineral rain washing away months of grimy revelations.

When rumors about the 60-year-old musician and a married 45-year-old housewife from Red Bank, N.J., were first reported more than a year ago, I was saddened. I am always saddened when I read about Bruce Behaving Badly, especially when the behavior seems likely to endanger his two-decade marriage to E Street Band member Patti Scialfa, a marriage in which I have an inappropriate emotional investment. I am that rare Bruce Springsteen fan who loves Patti Scalfia. I have written thousands of words about how much I love Patti Scialfa. In fact, if you have been to a Bruce Springsteen concert and have heard -- over the chorus of grumbles and "boos" that traditionally greet Bruce's introduction of his wife -- a voice bellowing "Patti!" as loudly and supportively as possible, then you have heard me.

But the celebrity train wrecks of the past year have made the details of Springsteen's alleged fling -- revealed now in the divorce papers of New Jersey mortgage broker Arthur Kelly filed against his wife Ann, Bruce's reported co-adulterer -- seem like an episode of "The Courtship of Eddie's Father," especially if the episode were viewed immediately after a "Jersey Shore" marathon. It's like dipping into the story of Edward Ferrars and Elinor Dashwood in "Sense & Sensibility," after having just read "Poor Little Bitch Girl" by Jackie Collins. Instead of cringing and holding my hands over my ears to block out news of my idol's personal transgressions, the details of Bruce's alleged infidelity made me want to wrap my arms around him, his purported paramour, his talented wife, and the New York Post, bestowing on all of them a big wet kiss of thanks for not being gross and horrifying.

According to the Post, which based its story on the Kellys' divorce proceedings, Springsteen first began checking out Ann Kelly at the swank gym they both attended. Reportedly, they lunched together so often that Kelly's daughters, who frequently joined them, took to calling  Bruce "Bruce." (If I have children, I can promise that they too will call Bruce "Bruce." And I have never had an affair, or even lunch, with the guy.) Apparently, at the height of their supposed liaison, local whispering about Springsteen and Kelly got so disruptive that Ann's father urged her to quit the gym. Hear that? Quit the gym. As opposed to quitting Ambien, random cocktail waitresses, call girls, the campaign for the American presidency, or couch sex at your office with a tattoo-covered woman who was not your wife and had a thing for the Third Reich.

As far as I can tell, there were no Nazi outfits or salutes involved in this story. No used tampons or violent text messages. No one's wife had terminal cancer, no one got a mistress pregnant. No one had a business card reading "Truth Seeker" or one reading "Being is Free." There was not even a "ping-pong impresario" involved in this story. Also, Springsteen's scandal has not prompted veiled public apologies, hiatuses from the sport; no press conferences or girlfriends who have follow-up press conferences to your press conferences. Just some bitingly angry lyrics from Scialfa's 2007 album "Play It As It Lays" (on "Play Around," she sang, "You've got all the toys/That money can buy/But still you come to me like a little boy/So unsatisfied") and a statement from the Springsteens reading, simply, "Bruce and Patti continue to have a terrific marriage and are very devoted to each other and their children."

While Tiger Woods reportedly texted one of his lady friends, "Hold you down while I choke and Fuck that ass that i own Then im going to tell you to shut the Fuck up while I slap your face and pull your hair for making noise," Bruce reportedly hung around Ann at the treadmill and told her that she had the "'nicest ass' in the gym." Where Tiger reportedly scraped up enough change to offer one of his mistresses a chicken wrap sandwich from Subway, Bruce may have sent Ann unsigned Valentines and given her front-row seats to his rehearsal shows at Convention Hall in Asbury Park, as well as two lefty books in the hopes that they might prompt her to reconsider her conservative politics.

Which gets at one of the reasons this story sounds practically wholesome in comparison to the grunge that has floated to the surface in recent months. While, if true, Springsteen's behavior was likely painful for his family, it seems on its face not to have been built on the degradation, objectification, hatred for or cruel treatment of wives or mistresses, but on appreciation for a specific, normal-looking 45-year-old woman who happened to be a dead ringer for his wife. When viewed in the light of celebrities who have sex with multiple, seemingly interchangeable women half their age, who hire staff to cover up for them, who have sex with interlopers in their spouse's beds and choose as sexual partners fame-seeking publicity generators, the aged rock star who flirts awkwardly and tries to change the politics of the age-appropriate(ish) lady at his gym is practically chivalric.

I feel bad about feeling so good about Bruce's alleged missteps. I really do. I don't want to lionize the guy for lying to his wife, for possibly hurting his family. I don't want to pretend that just because infidelity does not include car crashes or Nazi paraphernalia that it is not agonizing to the people it damages. But I'm not the only one feeling this wave of affection for the slightly corny nature of Bruce's breach, for the straightforward purity of his alleged misdeeds.

Sheila Weller, author of "Girls Like Us: Carole King, Joni Mitchell and Carly Simon and the Journey of a Generation," was so struck by the retro-chaste quality of the story that on Monday she posted a message on her Facebook wall about the "Updike-esque" tale of "two decent, respectable, age-appropriate, long-married, probably bored people in a leafy suburb [who] meet and try to be discreet. It's 50s-60s quaint, next to every other celebrity affair we've heard about." Weller told me later by phone that she'd "always thought Springsteen was a very decent guy – I think we all do – and it just seems so old-fashioned in comparison to all this other stuff! It seemed like a 'Mad Men'-era affair. I mean, it's never good to be unfaithful, but these things happen. If you're going to do it, that's the way to do it."

And Weller’s friend, the writer Jesse Kornbluth, held a contest on Monday on his site, Head Butler, offering a prize to the reader who offered the best guess as to which two political volumes Bruce gifted Ann. Weller guessed Taylor Branch’s "Parting the Waters." My money is on "Journey to Nowhere: The Saga of the New Underclass" by Dale Maharidge and Michael Williamson," a book I have heard Springsteen mention in concert. Hopefully, unlike the ceaseless stream of information about the vulgar proclivities of Springsteen's faithless fellow celebrities, this particular detail will remain shrouded in mystery.