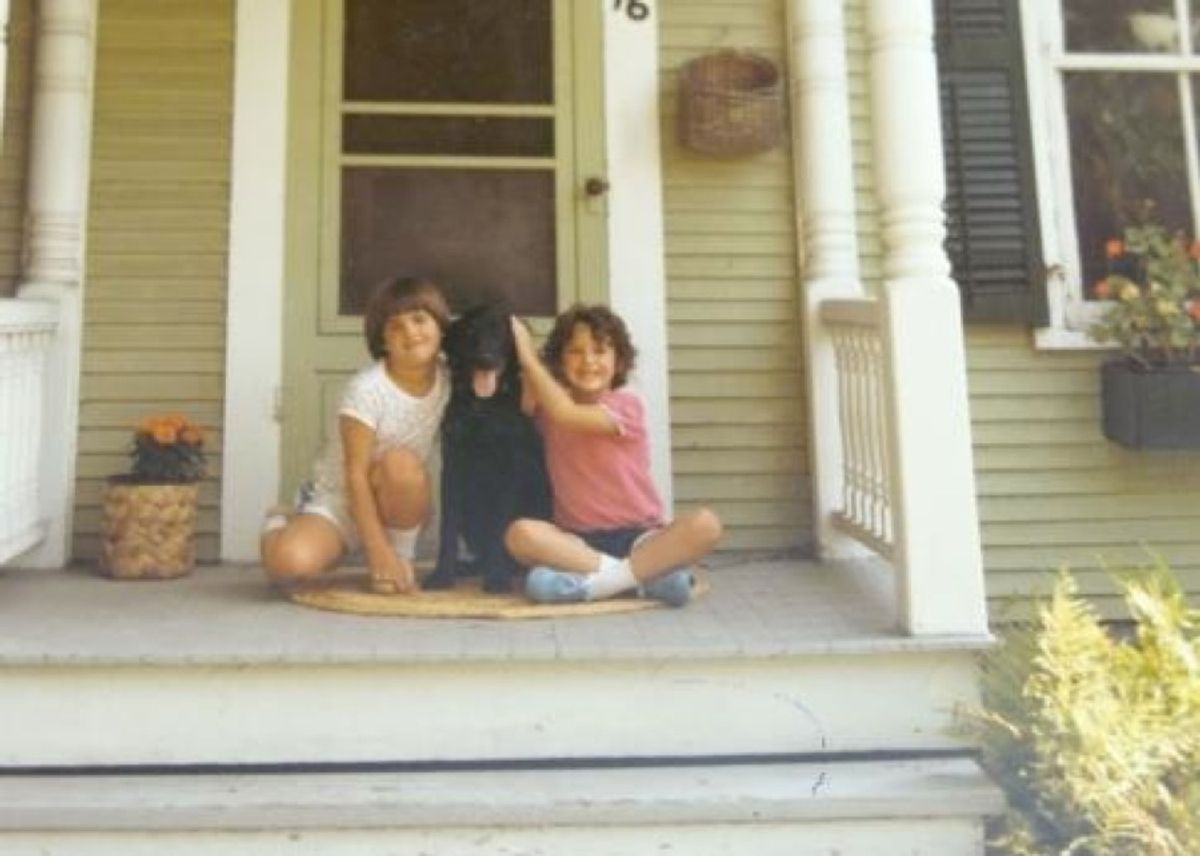 One old house and a crumbling barn were all that remained of the original 150 year old farmstead. For all the wrong reasons we bought the place. Located on the curb of a busy intersection, there was little privacy. Windows, open all summer let in the traffic noise and odor. The plows constantly piled up the snow so that shoveling a small path to the door was an exercise in futility. With little insulation it was a freezing in the winter. No energy stars for that old house.

But even with all the quirks and general disrepair it was a whimsical little home. The front had two separate porches. One led to the front door, the other to the kitchen door. People often came soliciting to both doors thinking the house was two apartments. Weren’t they surprised when the same little girl(s) opened both doors?

Upstairs, we fixed up a tiny space with a window overlooking newly planted shrubs and turned it into a sunny dollhouse-sized playroom. The old house had a hole from the dollhouse room floor into the kitchen to migrate the heat from the single woodstove located downstairs. The hole had an old iron grate, and was big enough for the cats to drop through onto the kitchen table. While we were used to the cats jumping through the hole, it did startle visitors when a gray and white fur ball came flying through the ceiling.

Baking brownies with tiny marshmallows one fall day, I lost track of the chatter from the two little girls above. That is, until I heard a deafening screech that certainly sounded like a feline, but was not. A child ran into the kitchen from the back porch. You can’t actually get outside except through the kitchen from upstairs. My brain addled through the logic. The conclusion was heart stopping.

3. Hole in ceiling only big enough for cat.

4. Did not exit, apparently, through any door (or hole).

The story was revealed through giggles and tears. Tossing your sister out the 2nd story window was the theme of the day. And I have those lemon loving in-laws to thank for that. Since they could never remember the words to all the traditional nursery rhymes, they ended each the same way. And taught the little girls every single rhyme with this ending:

Little Miss Muffet sat on her tuffet eating her curds and whey.

Along came a spider, sat down beside her & threw her out the window.

The window. The 2nd story window.

Turns out one girl threw the other and then jumped after her. Landing in those most forgiving shrubs saved both from breaking their little necks. The poor shrubs took it on the chin and survived and even seemed to thrive.

Though we carefully discussed why tossing someone out a 2nd story window was not such a peachy idea, I am pretty sure they continued to jump out that window based on the condition of the shrubs throughout the fall. I can only imagine what passing motorists thought when they were treated to the flying sisters’ act. I’m grateful no one called child services.

The last Google earth picture of the house shows that the porches finally fell off and weren’t replaced. But those shrubs are still there, bigger than ever.

Any time I bake with marshmallows I think of the two small flying Wallenda peanuts, the old house that will probably still never receive any energy stars, and most of all, those wonderful little shrubs.

I’m also quite grateful that the lemon loving in-laws redacted the 2nd story window ending to all things nursery rhyme.

Notes: Gluten Free Girl and the Chef’s website is full of wonderful recipes and information for celiacs and the gluten intolerant. For her graham cracker recipe, I use brown sugar to replace most of the honey, although you should keep some in the recipe – it adds a nice flavor. I double the recipe. I leave out the final sugar cinnamon dusting. Best gluten free graham cracker recipe out there!