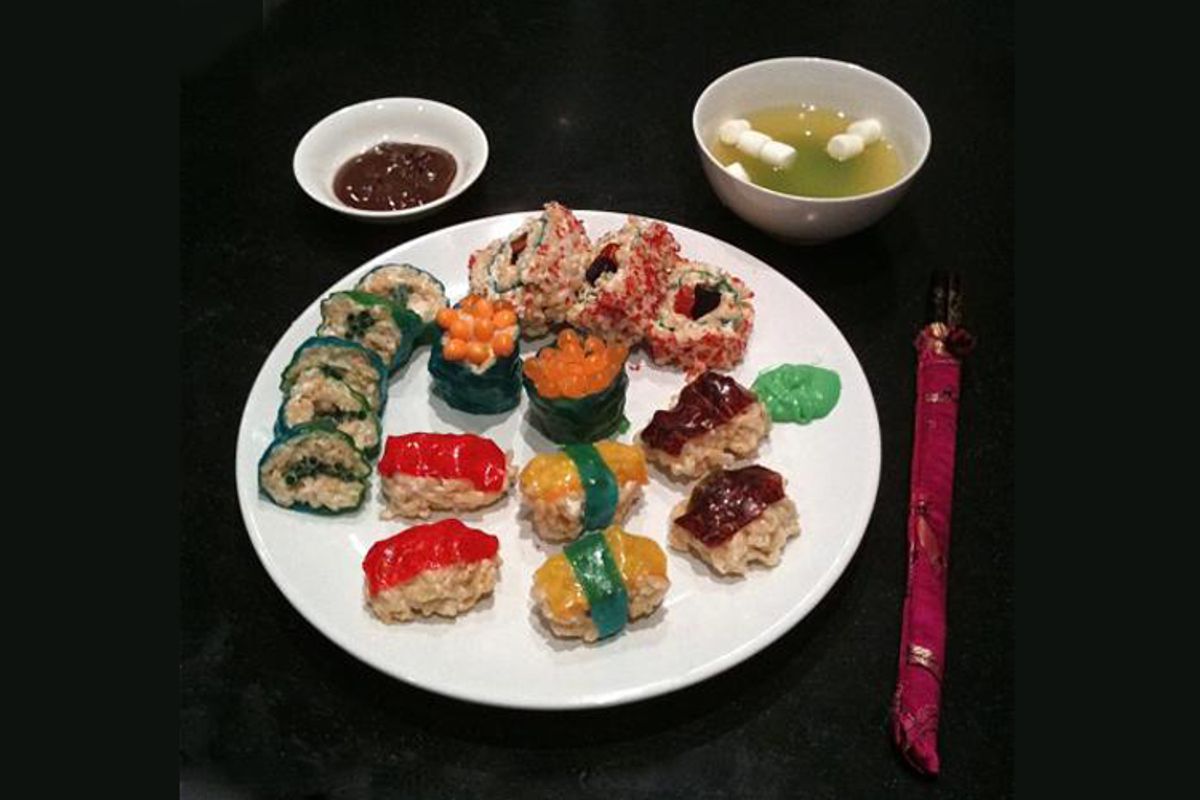 This winning entry for the Salon Kitchen Challenge -- in which we asked readers to create food that looks like other food -- comes to us courtesy of Mamie Chen. Check out this week's Challenge here.

I acquired my taste for sushi while in college, at a Japanese restaurant called Miyake's. The sushi was probably mediocre at best. I certainly didn't know any better at the time. But it was the type of place where you got a little sushi to go with your sake bombs, not the other way around. Being in a college town, they always checked IDs, but it's funny how five people with ID's could order 10 sake bombs without raising any eyebrows.

We had a ritual: Everyone stood up, holding a shot of sake over a pint of beer. With the waiters urging us on, we'd count to three in Japanese, "Ichi, ni, san, sake bomb!" drop the shot glass into the beer and chug the whole thing. The last person to finish would have to stand up on his or her chair and down a second sake bomb.

A lightweight, I was, of course, the last one to finish my drink. So, with everyone, including the waiters, chanting, "On the chair! On the chair!" I clambered up to chug my second sake bomb. Afterward, as I swayed on my lofty perch, beer dribbling down my chin, I saw two waiters whispering at the far end of the table. Judging by their gestures and facial expressions, I'm pretty sure the conversation went something like this:

It's one thing to turn a blind eye to a couple of minors in a large party. It's another thing to have said minor standing on a chair, chugging a sake bomb with everyone cheering her on. I was quickly urged to sit back down and enjoy the sushi, quietly and without calling attention to myself.

And somewhere along the line, I fell in love with the sushi. I love the colors -- the bright reds, oranges, and yellows that you rarely get to eat outside of fruit. I love the textures -- the smoothness of sake (salmon), the firm chewiness of tako (octopus), the salty pops of ikura (salmon roe). I love the flavors -- the unexpected sweetness of ama ebi (sweet shrimp) and uni (sea urchin). I especially love the pungency -- the short-lived juxtaposition of pleasure and pain as the wasabi burns through your nasal passages. It doesn't get any better than that.

Now, I go into withdrawal after a week or two without sushi. It still amazes me that I was able to go without for nine whole months, through each of my three pregnancies. If that isn't a shining example of the kind of sacrifices parents make for their kids, I don't know what is. And is it any wonder that my newborns' first public outings were all to Japanese restaurants? As toddlers, they learned to quietly amuse themselves shelling edamame beans while I got my fix. And these days, I get regular requests from them to go to "that place with the moving (conveyor belt) sushi."

So, in honor of our family favorites, I present Rice Krispies Sushi. I actually considered making up some kind of child-friendly sake bomb, but thought better of it. No need to tempt anyone to call Child Protective Services. Besides, a mom's gotta leave some things for her kids to discover on their own -- preferably when they're in college and legal.

**Special thanks to Marianne Daley for letting me steal her idea! I got tired after making just one plate of sushi. She made two large platters of mock sushi for her daughter's birthday party. Amazing!**

Futomaki (rolls): gummy worms for the inside vegetables, red decorative sugars for the fish roe on the outside

Miso soup: apple mango juice for the soup, mini marshmallows for the tofu, and green fruit roll-ups for the seaweed