The naked yoga movement is catching on, and fans say it helps create an intimate -- but nonsexual -- community 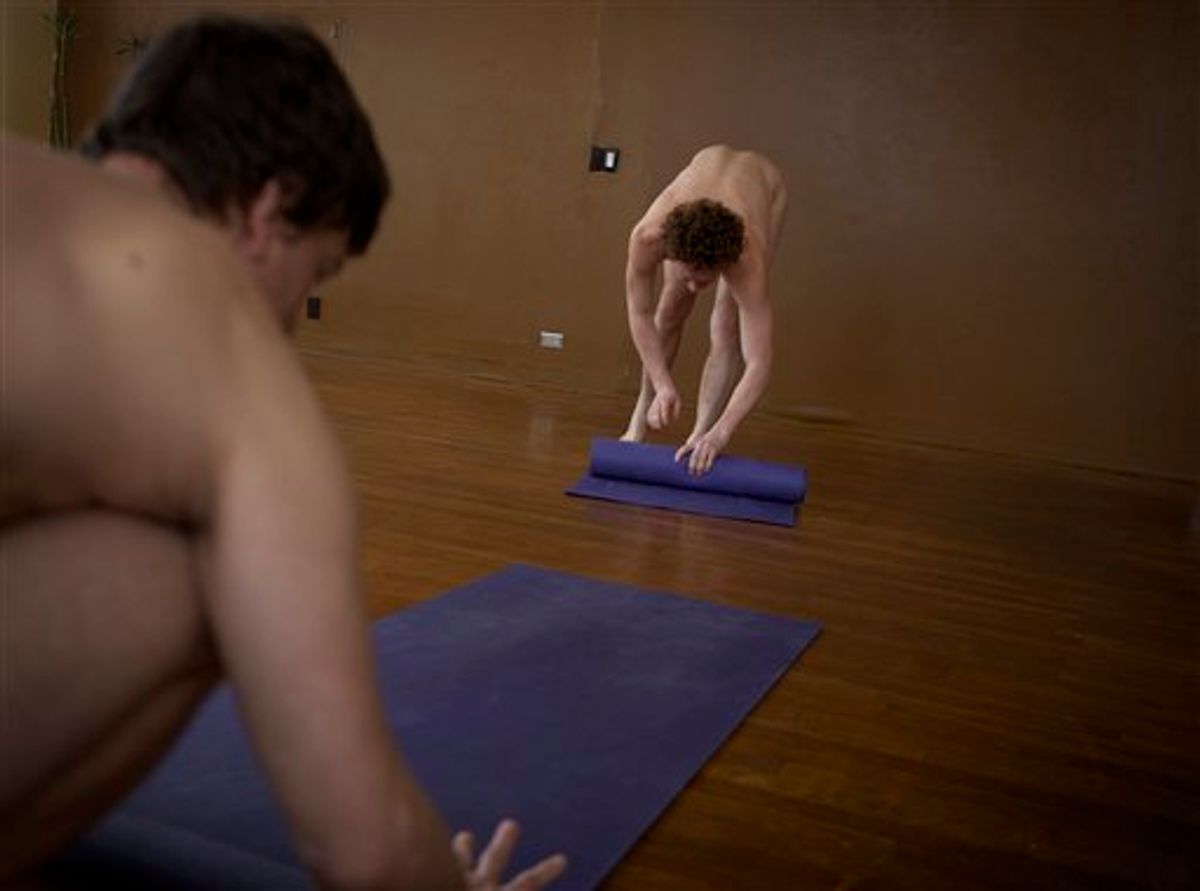 Some people work out to look good naked. Others skip a step.

A few classes are coed, but male-only gatherings tend to be more popular and have become a mini-phenomenon in the gay community, with studios in Boston, San Francisco, Los Angeles and Salt Lake City. A studioless group in Chicago practices in the apartment of a nude yoga enthusiast.

Fans say the nudity aids in deepening their yoga practice while building a close -- and emphatically nonsexual -- community. "A lot of people, especially living in New York, don't get the opportunity to connect with people in an intimate way," said Aaron Star, who started the naked yoga movement.

And while participants do occasionally report a frisson of excitement, Star and the practice's aficionados make one thing clear: This is about physical fitness.

"This is about yoga and appreciating your body," said John Cottrell, 40, who teaches naked yoga classes in Salt Lake City twice a month. He calls them a safe, nonthreatening space "to help men especially look at themselves in a different way.

Star began the practice to appeal to a primarily gay male audience and achieved fame in the yoga world with his DVD series "Hot Nude Yoga," which allows aspiring yogis to practice in the privacy of their homes.

Hot, yes -- in temperature, for starters.

At the small class I attended, an undeniable sexual charge hung in the room, making the exercise at times painfully weird and embarrassing. Many nude yoga classes revolve around partnering positions, a series of postures that put two men within striking distance of the other's privates.

Not all serious yogis think the practice makes sense.

"I don't see the point," said Mary Dillion, who teaches clothed yoga in Manhattan. "I have a yoga practice that I like and I can be naked in my home. I don't need to do naked yoga."

And Joshua Stein, editor-at-large for OUT Magazine, who attended a class in 2008, says the quality of the yoga was diminished by the heightened sensuality.

"It's almost if the yoga is something between an afterthought and an excuse," said Stein, who is heterosexual. "It gives you this gray area where you can be intimate physically, but not so aggressively intimate as in a bath house or in a bar."

He describes being asked to do a child's pose -- a kneeling pose with arms stretched forward on the ground -- while a partner draped himself on his back. "It's not something you really need a partner to do," he said.

Phoenix sees nudity as an extra pull for men, who often need an incentive to practice yoga. Still, she nixed the idea that nudity created a sexual element, but one of comfort.

"Men more often fall into a general greater ease with their bodies than women do," she said.

But the trend seems to appeal mostly to gay men. David Flewelling teaches Mudraforce Yoga at a home studio in Montreal, Canada. As at Star and Cottrell's studios, the majority of attendees at Mudraforce are gay.

Flewelling said sex is never part of the experience. Nude yoga, while extremely sensual, is not sexual, he said.

"There's something fantastic about exercising without clothes," he said. "You're free of the restrictions that clothes put on and it puts everyone on even keel."

Even teachers of naked yoga, while railing against the suggestion that the class is tantamount for foreplay, can send mixed signals. When my class ended, I took aside the instructor, Jeffrey Duval, and asked how he got into naked yoga. Duval acknowledged he attended his first class because he thought it was about sex.

But his experience surpassed all his expectations.

"You're shedding away your clothes, but you're also shedding away insecurities and fear," he said. "I can't think of a more perfect way to practice."