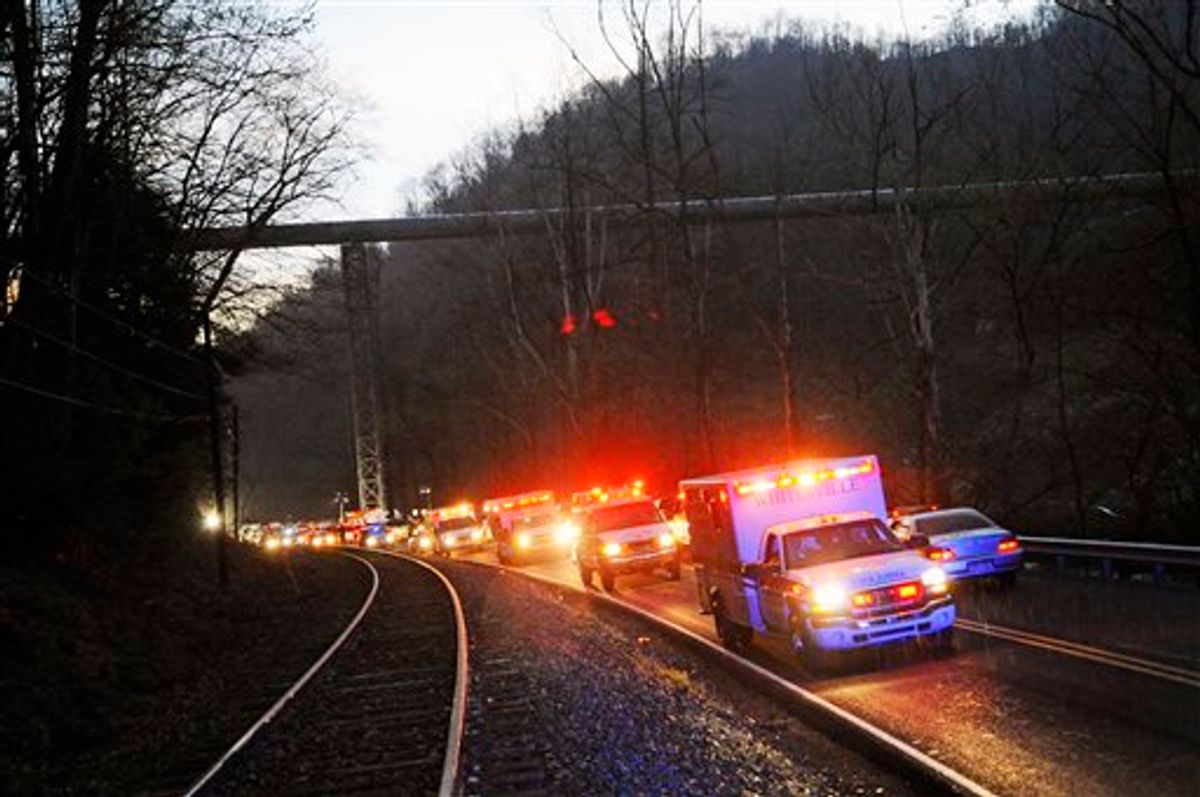 Emergency vehicles leave the entrance to Massey Energy's Upper Big Branch Coal Mine Monday, April 5, 2010 in Montcoal, W.Va. after an explosion at the underground coal mine. (AP Photo/Jeff Gentner) (AP)
--

Four coal miners were missing after an explosion that killed 25 and poison gases blocked rescuers Tuesday from resuming their search in the worst U.S. mining disaster in more than two decades.

Rescuers began drilling three deep holes to vent methane and carbon monoxide from the mine so that search teams can go back in. But it will take until evening to get the first hole done and see if the mine air will allow re-entry , Gov. Joe Manchin said.

Manchin said at an early morning news briefing that while drilling on at least one of the three holes was slated to begin soon, it would take perhaps 12 hours before the drilling was complete and rescue teams could be sure of their safety in the mine, meaning the search wasn't expected to resume before 6 p.m.

"It's going to be a long day and we're not going to have a lot of information until we can get the first hole through," Manchin said.

The drills need to bore through about 1,100 feet of earth and rock, he said.

"All we have left is hope, and we're going to continue to do what we can," Kevin Stricklin, an administrator for the federal Mine Safety and Health Administration, said at a news conference. "But I'm just trying to be honest with everybody and say that the situation does look dire."

Though the cause of the blast was not known, the operation run by Massey subsidiary Performance Coal Co. has a history of violations for not properly ventilating highly combustible methane gas, safety officials said.

Stricklin said officials had hoped some of the missing survived the blast and were able to reach airtight chambers stocked with food, water and enough oxygen for them to live for four days. However, rescue teams checked one of two nearby and it was empty. The buildup of toxic methane gas -- a constant problem at the mine -- and of carbon monoxide prevented teams from reaching other chambers, officials said.

A total of 31 miners were in the area during a shift change when the blast happened, officials said. Some may have died in the blast and others when they breathed in the gas-filled air, Stricklin said. Eleven bodies had been recovered and identified, but the other 14 have not, said Manchin, who returned to the state after being out of town. Names weren't released publicly, but Manchin said three of the dead are all members of the same family.

"Everybody's just heartbroken over this and the impact on these families," said mine safety director Joe Main, who was headed to West Virginia.

After a record low 34 deaths last year, Main said he and others believed coal mining had turned the corner on preventing fatal accidents.

"There's always danger. There's so many ways you can get hurt, or your life taken," said Gary Williams, a miner and pastor of a church near the southern West Virginia mine. "It's not something you dread every day, but there's always that danger. But for this area, it's the only way you're going to make a living."

Benny R. Willingham, 62, who was five weeks away from retiring, was among those who perished, said his sister-in-law Sheila Prillaman.

He had mined for 30 years, the last 17 with Massey, and planned to take his wife on a cruise to the Virgin Islands next month, she said.

"Benny was the type -- he probably wouldn't have stayed retired long," Prillaman said. "He wasn't much of a homebody."

Prillaman said family members were angry because they learned of Willingham's death after reading it on a list Massey posted, instead of being contacted by the company.

"The families want closure," Manchin said at a news conference. "They want names ... these families are good people. Hard-working people. They understand the challenges. Right now I told them to do what they do best. Love each other and come together as a family."

Manchin said the explosion was massive and that the situation looks bleak, but that miracles can happen and pointed to the 2006 Sago Mine explosion that killed 12.

Crews found miner Randal McCloy Jr. alive after he was trapped for more than 40 hours in an atmosphere poisoned with carbon monoxide.

In Monday's blast, nine miners were leaving on a vehicle that takes them in and out of the mine's long shaft when a crew ahead of them felt a blast of air and went back to investigate, Stricklin said.

They found nine workers, seven of whom were dead. Others were hurt or missing about a mile and a half inside the mine, though there was some confusion over how many. Others made it out, Manchin said.

In a statement early Tuesday, Massey Chairman and CEO Don Blankenship offered his condolences to the families of the dead miners.

"Tonight we mourn the deaths of our members at Massey Energy," Blankenship said.

Massey Energy, a publicly traded company based in Richmond, Va., has 2.2 billion tons of coal reserves in southern West Virginia, eastern Kentucky, southwest Virginia and Tennessee. It ranks among the nation's top five coal producers and is among the industry's most profitable. It has a spotty safety record.

In the past year, federal inspectors fined the company more than $382,000 for repeated serious violations involving its ventilation plan and equipment at Upper Big Branch. The violations also cover failing to follow the plan, allowing combustible coal dust to pile up, and having improper firefighting equipment.

Methane is one of the great dangers of coal mining, and federal records say the Eagle coal seam releases up to 2 million cubic feet of methane gas into the Upper Big Branch mine every 24 hours, which is a large amount, said Dennis O'Dell, health and safety director for the United Mine Workers labor union.

In mines, giant fans are used to keep the colorless, odorless gas concentrations below certain levels. If concentrations are allowed to build up, the gas can explode with a spark roughly similar to the static charge created by walking across a carpet in winter, as at the Sago mine, also in West Virginia.

Since then, federal and state regulators have required mine operators to store extra oxygen supplies. Upper Big Branch uses containers that can generate about an hour of breathable air, and all miners carry a container on their belts besides the stockpiles inside the mine. Upper Big Branch has had three other fatalities in the last dozen years.

At New Life Assembly down the road from the disaster in Pettus, the 51-year-old pastor and miner Williams held a vigil with some of his faithful and had food for families and friends of the dead and missing, though few came.

Most families were sequestered in a building at the mine, the entrance guarded by bright lights, state troopers and hordes of ambulances.

Williams, who works at another Massey mine, said he knows the men at Upper Big Branch were professional and well-trained.

"People tend to think Massey does a lot of wrong, but I've been there for 18 years and they've never asked me to do anything unsafe," he said.

Upper Big Branch has 19 openings and roughly 7-foot ceilings. Inside, it's crisscrossed with railroad tracks used for hauling people and equipment. It is located in a mine-laced swath of Raleigh and Boone counties that is the heart of West Virginia's coal country.

The seam produced 1.2 million tons of coal in 2009, according to the mine safety agency, and has about 200 employees.

"The federal Mine Safety and Health Administration will investigate this tragedy, and take action," U.S. Secretary of Labor Hilda L. Solis said in a statement. "Miners should never have to sacrifice their lives for their livelihood."