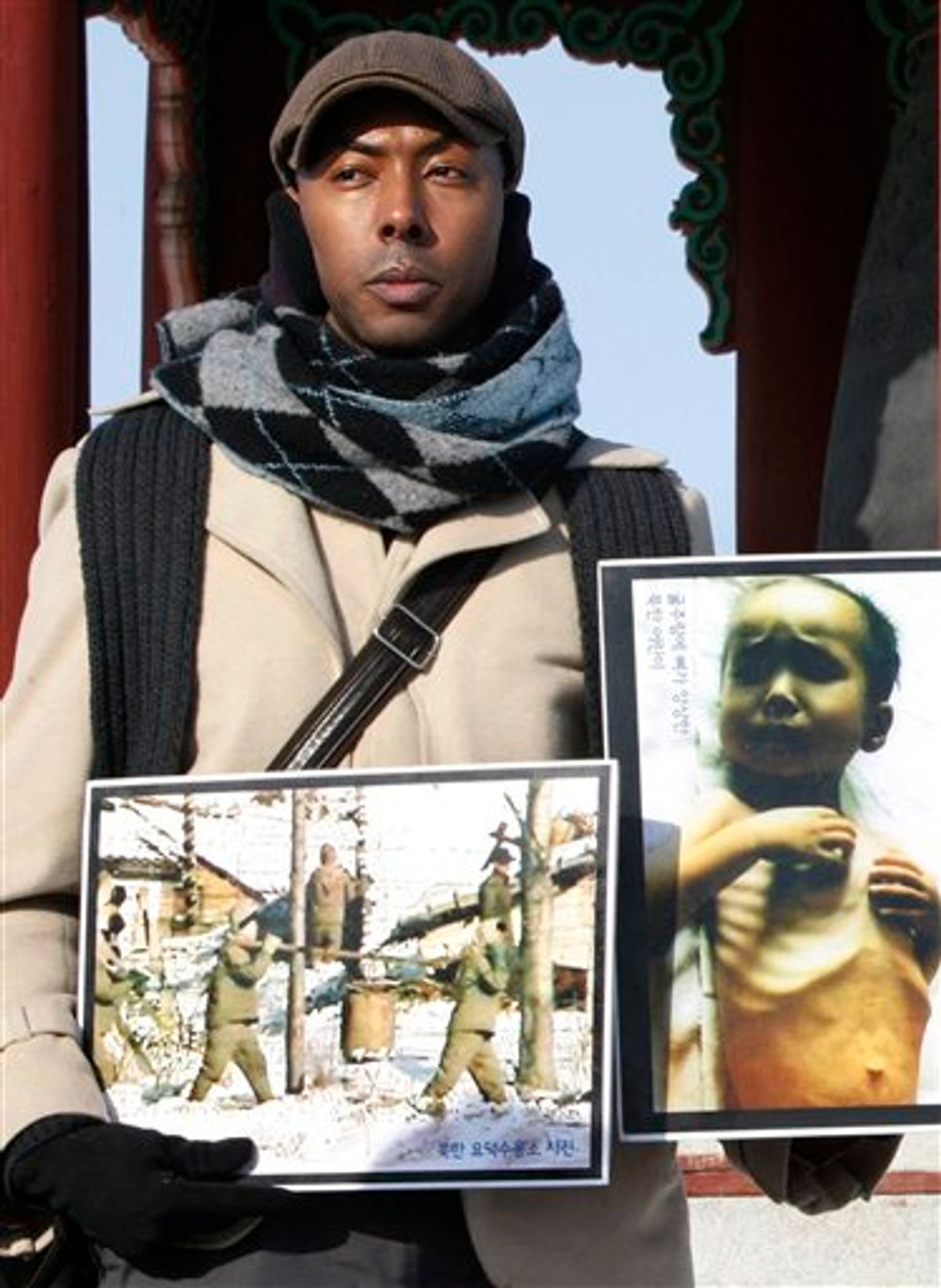 FILE - In this file photo taken on Jan. 12, 2010, American Aijalon Mahli Gomes, whose identification was made by Seoul-based activist Jo Sung-rae, participates in a rally organized by Jo denouncing North Korean's human rights conditions at the Imjingak Pavilion, near the demilitarized zone (DMZ) of Panmunjom that separates the two Koreas since the Korean War, in Paju, South Korea. North Korea said Wednesday, April 7, 2010, it has convicted and sentenced an American man to eight years in a labor prison and a fine equivalent to $700,000 for entering the country illegally and unspecified hostile acts. (AP Photo/Ahn Young-joon, File) (AP)
--

North Korea sentenced a Boston man to eight years of hard labor and ordered him to pay a $700,000 fine for crossing into the communist country illegally earlier this year, state media reported Wednesday.

Aijalon Mahli Gomes, 30, was the fourth American detained by North Korea for illegal entry in less than a year. Journalists Laura Ling and Euna Lee were held for five months before their release last August, and activist Robert Park was expelled some 40 days after crossing into the country last Christmas.

Gomes, who had been teaching English in South Korea before his arrest, acknowledged his wrongdoing at Pyongyang's Central Court on Tuesday, North Korea's official Korean Central News Agency said in a brief dispatch.

"An examination was made of the hostile act committed against the (North) Korean nation and the trespassing on the border of (North Korea), against which an indictment was brought in and his guilt was confirmed," the report said.

In Washington, State Department spokeswoman Joanne Moore said the government had seen the reports but she could not immediately comment. Washington and Pyongyang do not have diplomatic relations.

A spokeswoman for Gomes' family said they were "disturbed" by the verdict.

It was unclear what might have compelled Gomes to risk going into communist North Korea illegally.

However, Gomes -- described by friends as a devout Christian -- attended rallies in Seoul in support of Park, a fellow Christian from the U.S. who deliberately went into the North in December to call attention to the nation's rights record.

A Seoul-based activist familiar with Gomes, Jo Sung-rae, said he might have been inspired by Park to make a similar trip.

"Gomes was weeping and he looked so sincere when he asked me if I knew anything about Robert Park's status in North Korea," Jo said Wednesday.

Word of Gomes' Jan. 25 arrest came from a brief KCNA dispatch in late January, weeks after Park was detained. His name was released in another dispatch last month.

Park, who defiantly walked into North Korea from China, was on a self-proclaimed mission to draw attention to North Korea's human rights record and to call for leader Kim Jong Il to step down. He was released in February without charge.

Ling and Lee, who work for former U.S. Vice President Al Gore's Current TV media venture, were arrested in March 2009 near the Chinese border and sentenced to 12 years of hard labor for illegal entry and engaging in "hostile acts." They were freed in August after former President Bill Clinton made a high-profile visit to Pyongyang to negotiate their release.

North Korea, impoverished and proud, craves international recognition, particularly from the U.S., its foe during the 1950-53 Korean War. Clinton's visit was thought to be a diplomatic victory for North Korea's Kim Jong Il, who was beaming in photographs taken after holding talks with a serious-looking Clinton.

The arrests of U.S. citizens also took place against the backdrop of international pressure on North Korea to return to nuclear disarmament talks.

The regime walked away from the disarmament-for-aid talks involving the U.S. and other regional powers last year in anger over condemnation of a rocket launch widely seen as a test of long-range missile technology. North Korea followed that move with a nuclear test, earning tightened U.N. sanctions.

Verdicts issued by the Central Court -- North Korea's highest -- are final and cannot be appealed, according to the South Korean government.

However, North Korea expert Yoo Ho-yeol of Korea University in Seoul said Gomes will likely be released without having to serve the prison term. He predicted North Korea would use him as a bargaining chip in negotiations with the U.S. on its nuclear program.

"Continuing to hold him in custody is also a burden for North Korea," as it will only galvanize criticism of its human rights record, Yoo said.

He said North Korea will likely press for payment of the fine, or at least a negotiated amount.

In 1996, North Korea demanded $100,000 as a "criminal fine" after American Evan Hunziker swam across the Yalu River from China. They eventually agreed to $5,000 to settle Hunziker's hotel bill during his detainment, which Hunziker's family paid.

U.S. officials have said they want to make sure Gomes is returned to the United States as soon as possible.

Representatives of the Swedish Embassy in North Korea, which looks after U.S. interests in the country, witnessed Gomes' trial, the KCNA report said. The Swedish Embassy referred queries to the State Department.

Associated Press writers Rodrique Ngowi in Boston and Christine Simmons in Washington contributed to this report.