In a letter to shareholders, the company says it did nothing wrong, but thanks for all the help, everybody! 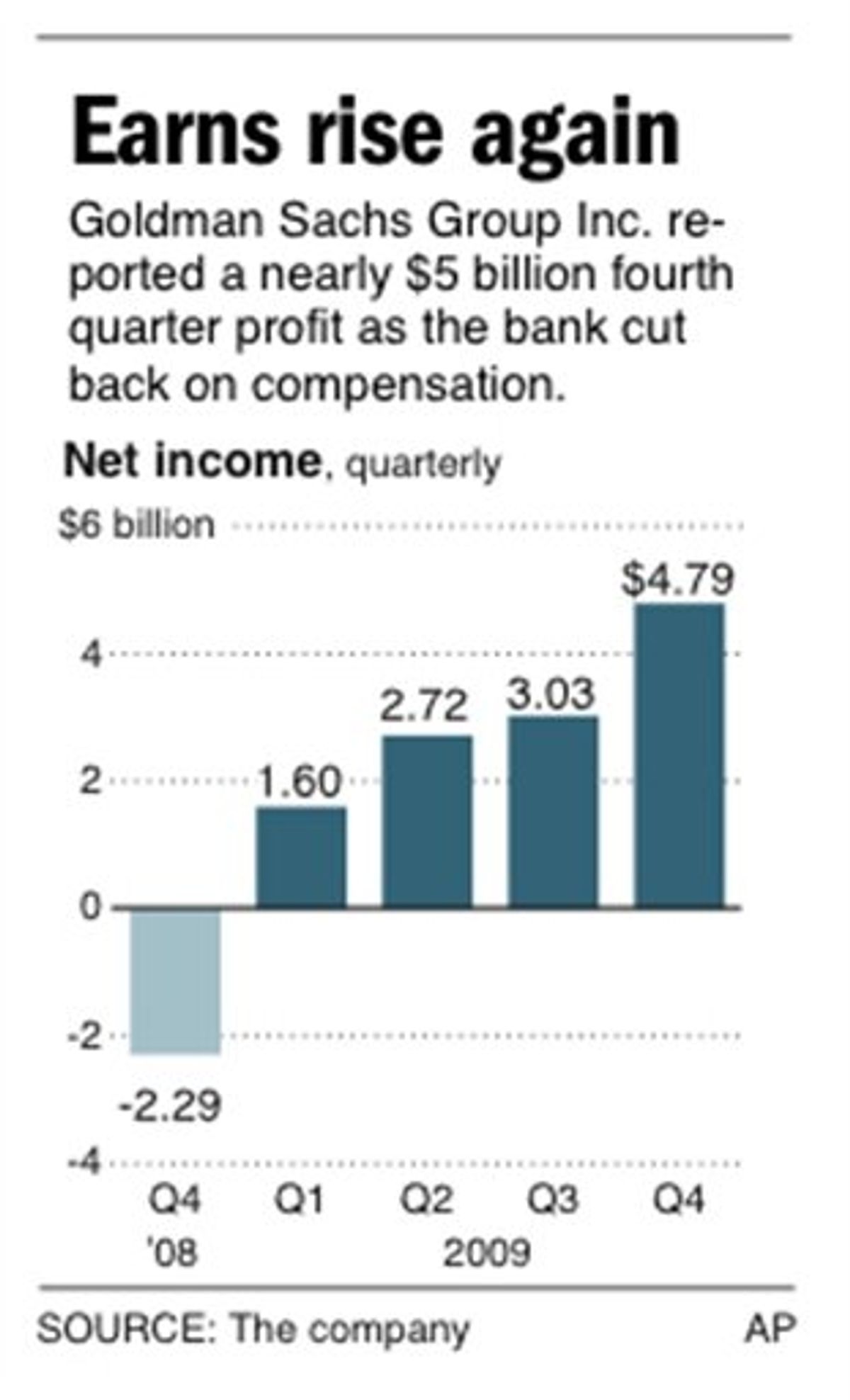 Here's an abbreviated version of the eight-page letter to shareholders included in Goldman Sachs' 2009 Annual Report: Goldman didn't bet against its own clients, did nothing wrong with respect to AIG, took steps to limit compensation for its top executives, and "embraced new realities pertaining to regulation."

Oh, and "Goldman Sachs is grateful for the indispensable role governments played and we recognize that our firm and our shareholders benefited from it."

You are welcome! The American taxpayer is glad to be of service!

Well, not actually. The American taxpayer is still steaming mad at the contradiction between the pathetic state of the economy and the fact that Goldman had a terrific year in 2009, thanks to a wide range of drastic efforts taken by the U.S. government to stabilize financial markets and keep all of Wall Street's blue-chip financial institutions from swirling down the drain after Lehman and Bear Stearns. But if you're looking for contrition from Goldman Sachs, you won't find it in the company's Annual Report.

Yves Smith does her usual effective job of disemboweling Goldman's cant on employee compensation and the "utter canard" that Goldman had protected itself against the possibility that AIG could not make good on its obligations and thus didn't really need the government to step in and help. I'd like to focus on a different topic -- Goldman's pledge "to remain a constructive voice and participant in the process of reform."

Given that much of the financial contagion was fueled by uncertainty about counterparties' balance sheets, we support measures that would require higher capital and liquidity levels, as well as the use of clearinghouses for standardized derivative transactions. More broadly, we support proposals that would improve transparency for investors and regulators and reduce systemic risk, including fair value accounting. In short, we believe that sensible and significant reforms that do not impair entrepreneurship or innovation, but make markets more efficient and safer, are in everyone's best interest.

Hey, that all sounds kinda reasonable. But if you want to know what Goldman really thinks about regulation, you need to listen to its lobbyists. Goldman is a member of the Securities Industry and Financial Markets Association (SIFMA), one of the big three lobbying organizations representing Wall Street (along with the American Bankers Association and the Financial Services Roundtable.) SIFMA doesn't reveal how much its members pay in dues, but the organization has an annual budget of around $80 million and says that "member dues are based upon size and market participation" so we can assume that Goldman forks over a pretty penny every year.

Sifma's No. 1 peeve is with Dodd's proposed re-write of the Bank Holding Company Act, which would prohibit proprietary trading and hedge-fund sponsorship for "systematically important" institutions with assets of $50 billion or more -- the Volcker rule....

Sifma is also concerned with a section of the bill on derivatives because... [of] the fear... that it will restrict the use of unregulated derivatives by businesses like airlines and agricultural concerns.

Sifma also opposes Dodd's call for mandatory trading of all over-the-counter derivatives and swaps on exchanges.

Not to be too fine about it, SIFMA wants to keep derivatives regulation weak, and protect the right of its members to recklessly bet depositor funds for their own accounts. This is not what we call "embracing new realities." It's more like a cold shoulder, followed by a stiletto between the ribs.