The Minnesota governor helps out with a Minneapolis rally Wednesday -- and might help his 2012 campaign, too 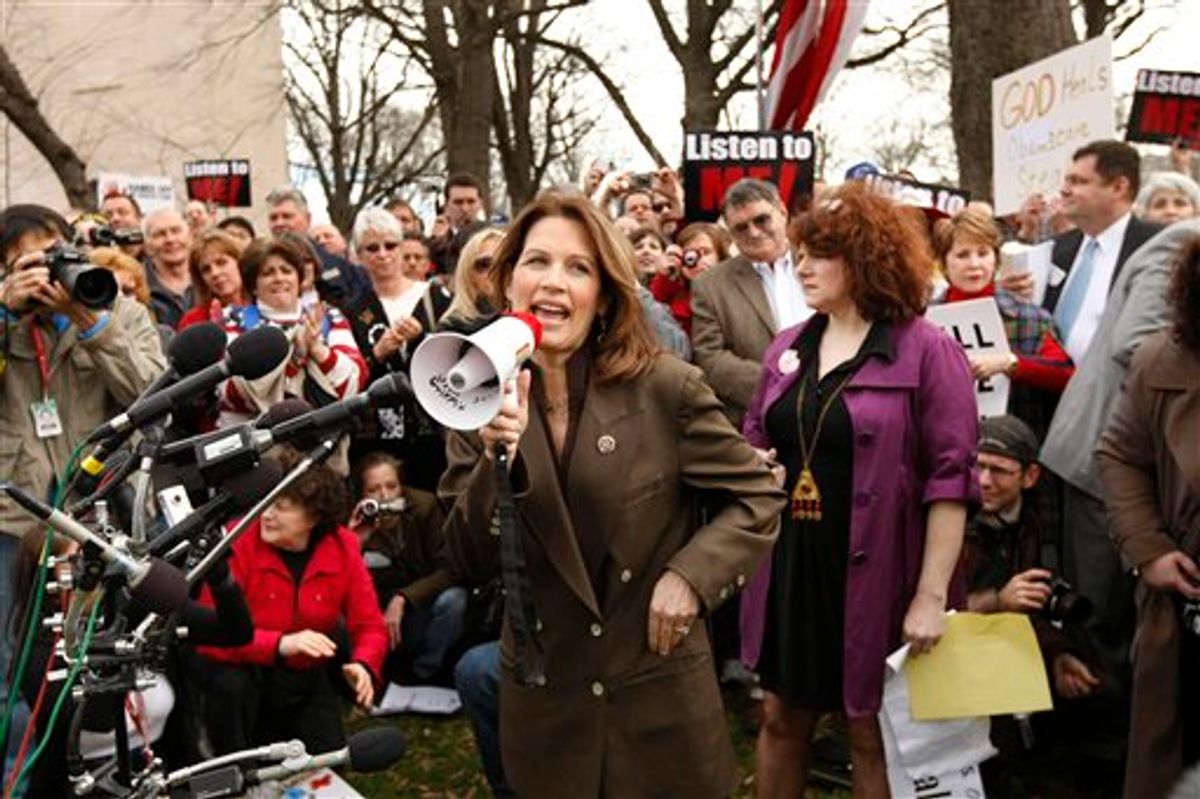 It would probably defy the laws of physics for Michele Bachmann and Sarah Palin to headline the same rally. But the laws of politics are far more flexible. So two of the biggest stars in the tea party world will come together Wednesday in front of 10,000 people in Minneapolis.

The event will raise money for the Minnesota Republican Party and for Bachmann's reelection campaign, which despite Bachmann's right-wing celebrity, could use the help -- two potential Democratic opponents are both raising money fairly rapidly, thanks to Bachmann's notoriety among people who don't agree with some of her more outlandish remarks.

But it could also give a bit of a boost to another Minnesota Republican. Gov. Tim Pawlenty, who's building the early stages of a 2012 presidential campaign, is eagerly and enthusiastically helping publicize the event. On Wednesday morning, Pawlenty e-mailed his supporters, asking them to "Stand with Michele Bachmann" and linking to a page to donate $10, $25 or $100 to her campaign. The donations go to Bachmann -- but Pawlenty's PAC captures the key information from contributors, including their e-mail addresses, mailing addresses, phone numbers and, of course, the fact that they're engaged enough with conservative politics to give to Bachmann in the first place.

Pawlenty's campaign also bought the URL BachmannRally.com. Which, if you type it in or click on it, takes you to a page where you can watch a livestream of the event at 2 p.m. Central on Wednesday -- but only if you give Pawlenty's team your name and e-mail address. (UPDATE: Actually, the registration at the livestream goes to Bachmann's campaign, not Pawlenty's outfit.)

A Pawlenty advisor says the whole point is to make the Bachmann rally a success; Pawlenty is also speaking at the event, just before Bachmann introduces Palin, and doing some Fox News Channel interviews tied to it. For Pawlenty, after all, the chance to piggyback onto such a high-profile event is hard to pass up -- people are far less familiar with him than they are with Mitt Romney, the only other would-be GOP president who's done much early prep for the primary cycle. And any loyal Minnesota Republican would surely want to help out Bachmann. If it turns out all his work also helps Pawlenty build the kind of national e-mail list and donor base you need to compete in 2012? Gee, wouldn't that be a nice coincidence, too.

UPDATE: The Democratic National Committee has put together a not-so-flattering video of Palin and Bachmann's greatest hits to mark the rally. Watch here:

It's nice that TPaw has joined Sarah Palin's entourage. If Bachmann is "E" - Palin's alter ego -- I guess that would make Pawlenty Johnny Drama -- a less popular sibling hoping to catch some reflected glory. Either way it's nice that Palin and Bachmann let Pawlenty hang out with them today.